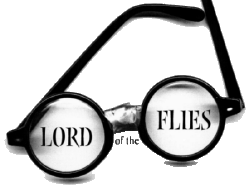 While sophomore year in general is an academic drag of mind-boggling proportions, there’s one bright spot to guide you through the darkness – the Spongebob Squarepants episode, “Club Spongebob.”

When Spongebob, Patrick, and Squidward get stranded in a jungle, they must turn to the  powers of a magic conch shell to keep order within their miniature society.

But Squidward’s more heinous tendencies make themselves known as time progresses, providing us with a fascinating exploration of humanity’s underlying savagery and violence.

This is all very unsurprising, considering that “Club Spongebob” is just a higher-quality version of William Golding’s literary classic, “Lord of the Flies.”

“Lord of the Flies” has been the subject of many an academic essay, with every aspect of the novel, from the length of the characters’ hair to the state of their clothes, having been overanalyzed and stuffed with symbolism.

But when taken at face value, “Lord of the Flies” is a really, really enjoyable read.

The plot centers around a planeful of British schoolboys who are stranded on a tropical island with no adult supervision. At first, they try to grasp at some semblance of society, using a certain conch as a vector for order. (Sound familiar yet?)

But as time goes by, their own fear, paranoia, and inner bloodlust cause them to start acting in ways that precipitate a complete collapse into chaos.

“Lord of the Flies” isn’t by any definition a light read, but it’s certainly an interesting one.

The ominous tone of the story grows as the narrative progresses, highlighted by Golding’s beautiful, visceral writing, and the conclusion of the novel presents a plethora of questions for the reader to consider -–  about themselves, about society and about humankind.

Such queries include: Is humanity inherently savage? How far do personal morals dictate actions when functioning under a crowd mentality?

How the heck are these boys still wearing clothes after going three months without a washing machine?

Also, “Lord of the Flies” was totally the inspiration for the television show “Lost.”

High school English classes are funny because students either love them or hate them.

But one thing’s for sure, nobody is immune to reading a terrible required reading book.

That book for me came in the form of “Great Expectations.”

First off, this clunker is written by Charles Dickens, the only author who focuses more on writing about pudding in his novels than actually furthering the plotline.

And why do so many of Dickens’ characters eat it?

Nevertheless, Dickens will probably live on as a much-dreaded staple of the required reading list, so Shmoop away, sophomores.