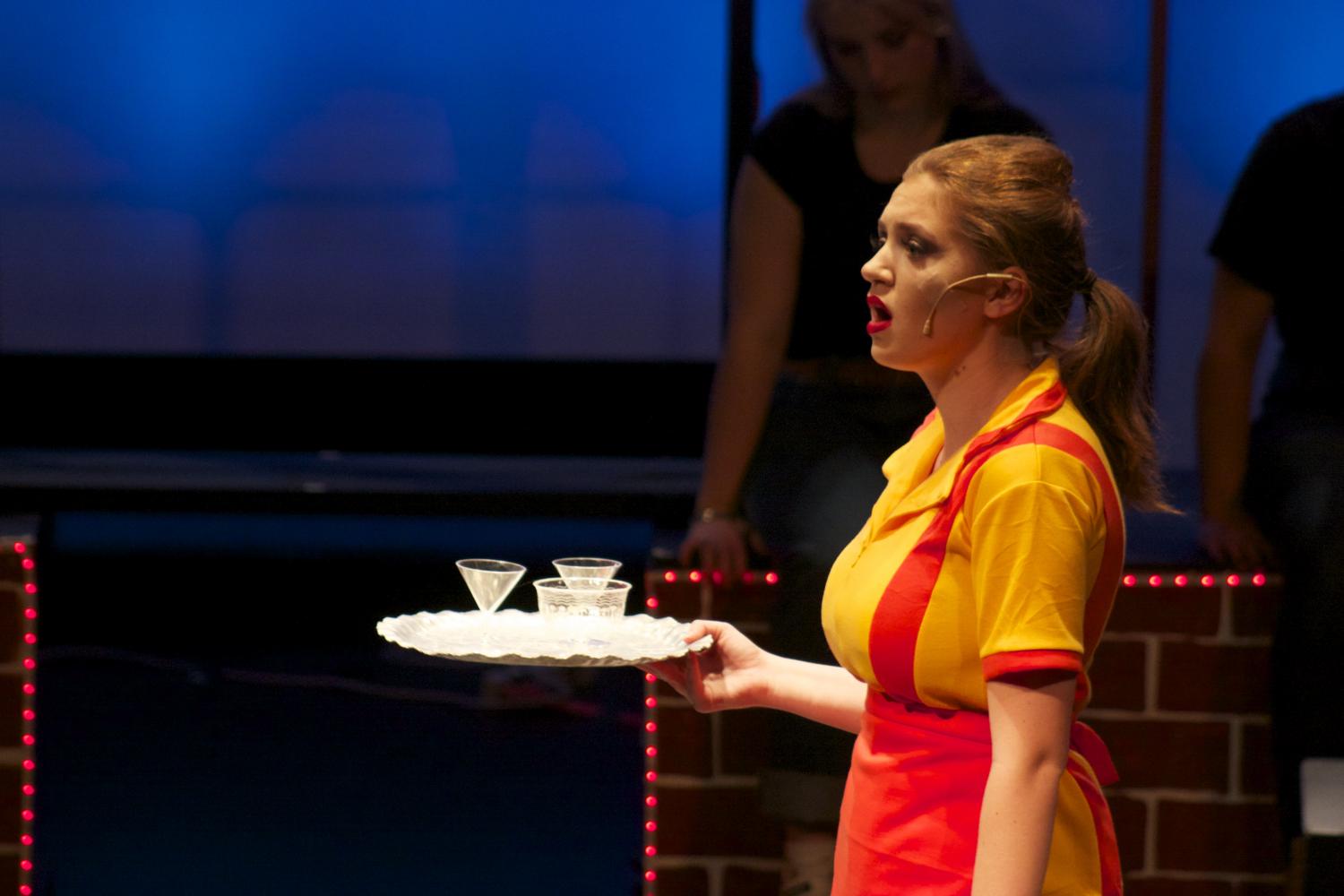 Sophomore Claire O’Connor in “It’s an Art” in her role as a spunky Italian waitress struggling to get by. Many students sang solos about the working class. “Working” ran through from April 27-April 29.

It is once again that exciting time of the year when the Cal High drama and choir department put on a new musical production, and this one was excellent.

The production offered an interesting and entertaining perspective on the life of a working American.

The musical was a collection of songs and dialogue about all different types of people who are describing their jobs.

This musical highlighted the difficulties, such as low wages, long hours and dangerous working conditions, people face in all fields of work.

The play itself featured a diverse variety of songs, from the country inspired number of “Brother Trucker” to the southern soul “Cleanin’ Women”.

The 90-minute musical was originally a novel published in 1974 by Studs Terkel. The recollections being told were provided from real people whom Terkel interviewed.

This was captured very elegantly through young actors like sophomore Claire O’Connor, who played a sassy waitress; sophomore Byrd Misfud, who was a hardworking maid eager for her daughter to success in life; senior Hannah Chylinski, a widow left with three children to provide for while feeling enslaved by her mill working job; and senior Brennan Osborn, who portrayed an elderly man named Joe who reminiscences about his younger days.

Not only did these following actors provide great performances, but their singing was fantastic and added even greater depth to their characters.

Woods said the entire musical was run by the students. That includes the lighting, choreography, and music board.

Specific highlights in the musical consisted of the student produced numbers: “Brother Trucker,” “Millwork” and “Just a Housewife,” which stood out in their remarkable production.

Each scene felt different because of the distinct choreography, lighting, and sounds. There were a variety of different tones in each individual scene.

The opening number, “Delivery,” was upbeat and lively, while the subsequent musical number, “Brother Tucker,” was calm and soothing.

This was executed nicely through putting monologues by other characters before each major musical number.

There was also great energy for every scene and the choreography was simple yet interactive.

Although the show stood out through its actors, musical number and choreography, some of the set design were a little bit lacking.

At times, vital parts of the set, wuch as the projected text detailing the setting of the play, were obstructed by other pieces, causing the audience to be unable to read them.

There were instances when stock images of settings of scenes were projected, perhaps as a substitute for building them. The effort seemed unnecessary and was ultimately unsuccessful, as the images were lost behind the bulky set, especially when they were placed out of sync.

Even though the acting as a whole was fantastic, some of the cast members struggled with singing.

Other notable actors were freshman Alex Radzanoskwi, who played a cynical office boss.  There were also excellence performances by senior Cecily Hanson, who played a suburban charity runner; senior River Moore, who played a cunning construction worker to a obnoxious nerd; and sophomore Polina Zhelomskaya, who played a prostitute who considered herself a hustler.

“Working” scores three and a half out of four Grizzly paws.