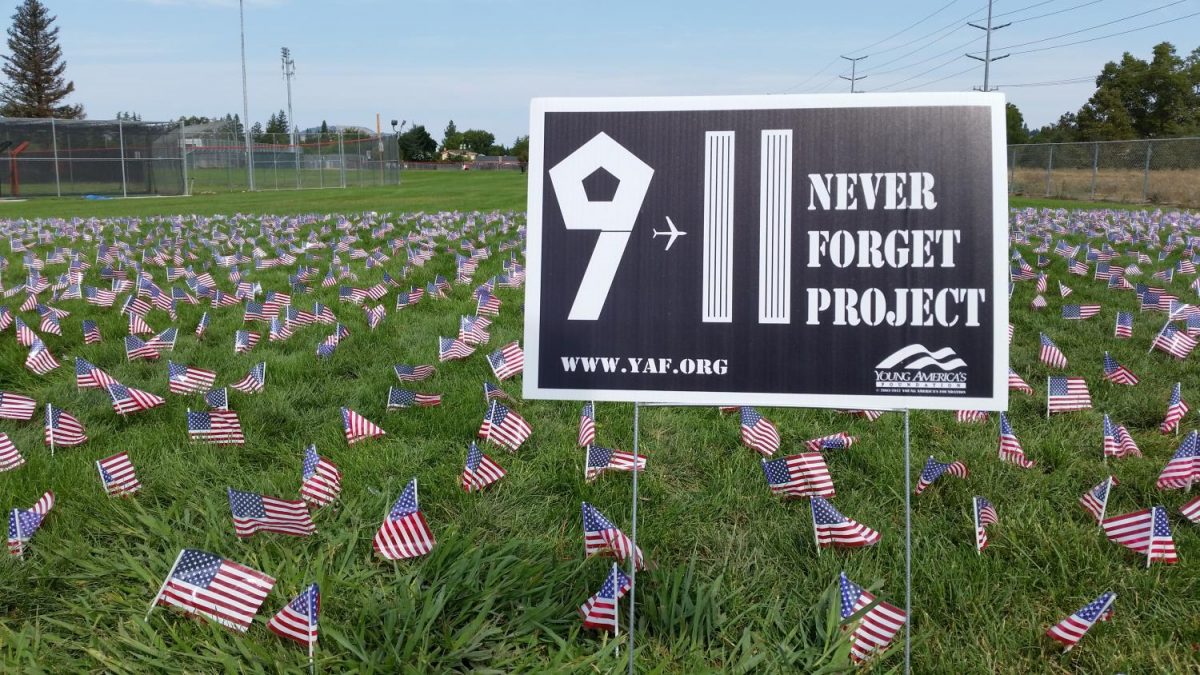 On the 16th anniversary of 9/11, a speaker visited Cal High and shared her experiences surviving the 2001 terrorist attacks that remain one of the deadliest act of terrorism in history.

One of Cal’s student-run clubs, the Freedom Alliance, planned the public event on Sept. 11 in the school theater.

Freedom Alliance is a club aligned with Turning Point USA and Young Americans for Freedom, both nonprofit organizations for conservative youth.

In addition to organizing the event, Freedom Alliance also set up a memorial behind Cal’s baseball field consisting of 2,996 flags, one for each life lost in the attack.

Around 150 students, staff and community members attended  the event to listen to survivor Nancy Lewis speak about the the horrors of the attack, the aftermath, and how her life was changed.

Lewis was working as an attorney in a building across the street from the Twin Towers when the planes hit. She watched the event unfold firsthand. The presentation began with a video that Lewis had created to describe what happened during the attack.

“I didn’t prepare anything written or rehearsed because this is something very difficult for me to speak about,” Lewis said.

Following the video, Lewis invited attendees to ask her questions.

The discussion was particularly informational for underclassmen, as the class of 2019 is the last to have been mostly alive during the terrorist attacks on Sept. 11.

Parents and students alike expressed a desire for similar educational events to be conducted in the future.

“My daughters are 20 and 16 and as they have grown up it has really upset them there is never anything mentioned in their schools on 9/11,” Lewis said.

On the morning of Sept. 11, 2001, 19 Islamic extremist men hijacked four US commercial planes that were headed for the West Coast.

Two of the planes were crashed into the north and south towers of the World Trade Center in New York City, killing everyone on board and collapsing both buildings. Thousands of people in the office buildings were unable to evacuate, and many also died in the surrounding area because of falling debris.

A third hijacked plane was crashed into the Pentagon in Arlington County, Va., killing the 59 people on the plane and 125 people in the building.

A fourth and final hijacked plane was headed toward a target in Washington, D.C., but after passengers aboard attempted to regain control of the plane, it crashed near Shanksville, Pa. There were no survivors, bringing the initial death toll to 2,606, according to CNN.

Al Qaeda leader Osama bin Laden initially denied involvement, but videos were discovered and released by the US government in December 2001 revealing bin Laden’s role in orchestrating the attacks.

Although the tragedy happened 16 years ago, its effects are still felt today, and the death toll continues to rise because of the attack’s indirect effects, such as illnesses related to dust inhalation.

Only 1,641 of the victims’ remains have been identified, preventing many families from getting closure. These attacks killed thousands, wounded even more, and fundamentally shifted both the foreign and domestic policies of the U.S.

Every year, the U.S. commemorates the lives lost on 9/11 with various ceremonies, such as the one at the Ground Zero Memorial in New York. Locally, the Exchange Club of the San Ramon Valley hosts an annual 9/11 remembrance ceremony.

“I’m surprised 9/11 isn’t taught more from kindergarten up, in age appropriate education for each level,” said one parent. “This should be taught. It’s not ancient history, it’s something that we can’t forget.”

Read senior Amir Udler’s guest editorial about the Sept. 11 memorial events on A6.