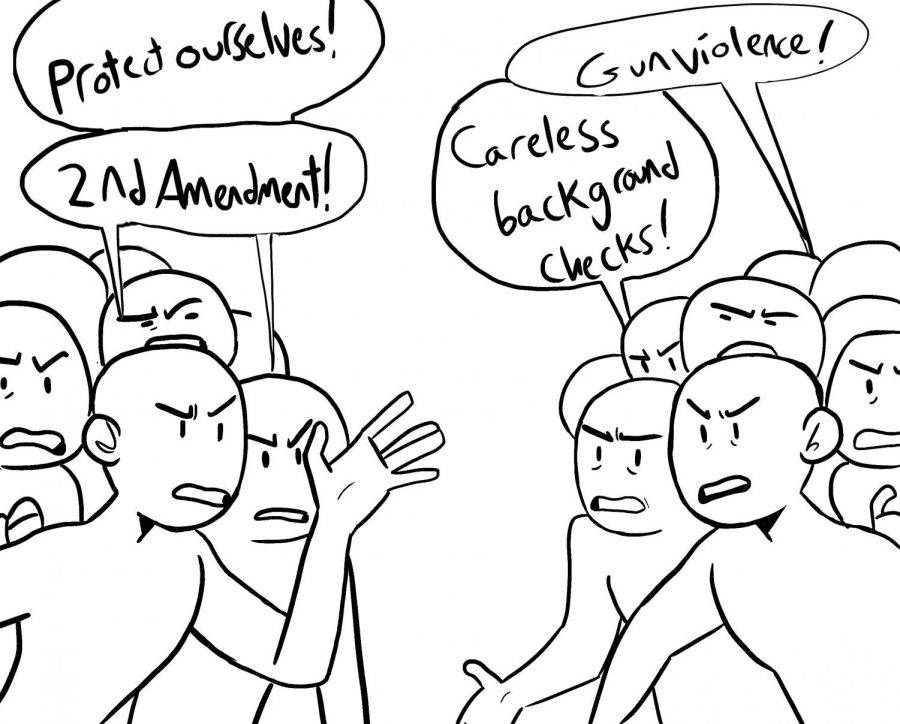 With the increasing deadliness of weapon technology and recent tragedies such as the Las Vegas tragedy or Pulse Nightclub shooting in Orlando, the need for gun control at the federal and state level becomes more apparent.

On Oct.1, Stephen Paddock, a 64-year-old Nevada man, opened fire on the Route 91 Harvest Music Festival killing 59 people and injuring 527 in the deadliest mass shooting by an individual in U.S. history.

On June 12, 2016, Omar Sadiqqui Mateen, a 29-year-old Florida man, killed 49 people in the Pulse nightclub, the second largest mass shooting by one person in our country’s history.

Mateen used a Sig Sauer MCX, which is almost identical to the AR-15. Paddock had 23 different firearms including AR-15 and AK-47 weapon systems.

The common factor is that both employed semi-automatic firearms to perpetrate their massacres because of their accessibility in comparison to fully automatic weapons, which are extremely hard to acquire.

There are already heavy restrictions in many states on the sale of fully automatic weapons. But these laws are easy to get around with the legal purchase of gun attachments for semi-automatic rifles such as bump stocks, which simulate automatic fire.

Such attachments were used by Paddock in the recent Las Vegas massacre, and they were among of the leading reasons he was able to shoot nearly 600 people in about 16 minutes.

The bump stock allowed him to fire rounds as fast as an automatic rifle without the weapon itself being classified as automatic by the Bureau of Alcohol, Tobacco, and Firearms.

All of the weapons used by Paddock and Mateen were legally obtained from licensed vendors. Both men passed all legal requirements and checks under Nevada, Florida, and federal laws.

Even if the men weren’t able to pass legal requirements, they could have easily bought weapons on the secondary market, such as gun shows, or from the black market of stolen guns, which a Bureau of Justice Statistics report estimates adds about 400,000 stolen firearms to the market each year.

The availability of firearms is just one significant issue that advocates the need for stronger gun control. The other is the ease with which assault weapons can kill people compared to other firearms.

A statistic often pointed to by those who oppose gun control on such firearms is that only 2 percent of the 12,000 yearly gun deaths are attributed to assault rifles, according to an FBI report.

But the problem is the weapon’s ability to allow a lone gunman to kill a large amount of people. For example, Paddock killed half of the estimated 2 percent who die by assault rifle shooting annually in one night.

The practical and recreational use of assault weapons simply do not justify their availability and ease of purchase.

Federal and state governments should be forced by recent events to reevaluate assault rifle laws and increase the requirements and restrictions on gun ownership.

No firearm is worth such a dramatic loss of American lives.

Guns have become a taboo topic in America.

You have hard-ban people on the left, who would like to prohibit everything from AK-47s to your granddaddy’s hunting rifle.

On the polar opposite of the spectrum, you have people on the right who don’t want anything related to guns banned.

And it doesn’t seem like there will ever be an end to it.

The U.S, should be focusing on curbing the illegal gun trade, not taking guns from the average Joe who likes to go hunt rabbits, and doesn’t want to hurt anyone unless he’s threatened.

The idea that everyone with a gun is an enemy of the state and a terrorist who wants to kill babies is exactly why the Second Amendment was created.

The Second Amendment is the right for the citizens of the United States to own guns to protect themselves from a government who may be oppressive to the people or another individual who may want to do them harm.

Banning the latest AR-15 or AK-47 assault rifles takes away the ability of US citizens to protect themselves, their family and their property.

The idea that banning legal firearms will stop violence is false. Countries with strict gun laws such as the UK have knife and acid attacks every day that kill or maim 450 people just in the year of 2016, according to the Telegraph. The Bureau of Alcohol, Tobacco, and Firearms (ATF) and FBI agents would have to go from door to door, house to house, for every gun owner in America, and seize 300 million licensed firearms. Some gun owners would rather die than to give up their guns. Gun violence would skyrocket.

Inevitably, people don’t want to give the government their guns.

And this scenario is entirely theoretical, as there is no way to actually ban all guns.

In the wake of the Las Vegas massacre, Congress has been trying to pass a bill that would ban bump fire stocks, a trigger mechanism that allows a semi-automatic weapon to fire almost as rapidly as an automatic one. Anyone who has fired a gun with a bump fire stock knows how hard it is to control these weapons. They were made more as a range toy than an actual viable weapon, because of the moving stock.

While banning bump fire stocks and seizing every bump fire stock in America would certainly prevent people from legally using them ever again, the “give an inch and they’ll take a mile” argument still applies to gun control.

Gun owners will be looking at mass “assault weapon” ban across America, with pistols going next until all we have are .22 target shooting rifles that people can’t even hunt with.

The UK banned all handguns in 1996, and as a result, the black market has been propped up with people being able to buy handguns off the deep web and get them shipped right to their houses, which isn’t even counting the hundreds of acid attacks last year.