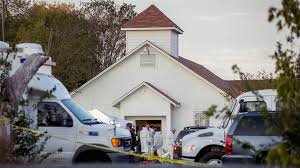 Over the course of this last year, over 512 innocent United States citizens were brutally murdered in mass shootings alone according to the Mass Shooting Tracker (MST).

The rapid fire of bullets whizzing through public spaces filled with crowds of people has become commonplace in the U.S, and hasn’t shown any signs of slowing down.

The debate of whether we need to reform the laws in place to manage acquiring firearms or create a better healthcare system to treat mental illness; an effort to prevent ‘crazed’ murders, has been widely debated in recent years.

President Donald Trump, stated quite simply, “I think that mental health is your problem here,” to reporters in Japan.

The misconception that people with mental illnesses are violent has plagued the media and influenced a large amount of people living in the U.S.

This misconception has proven to be a detriment to our society – years and years have passed and nothing has changed. Mass murders are still happening, our people are still dying. We need a reform on gun laws.

“Stigmas about mentally ill people are used for political purposes, despite the fact that the vast majority of them are not violent,” stated in an article in the New York Times. “There simply isn’t evidence to suggest mentally ill people should be a major focus of the gun control debate.

The U.S. Department of Health and Human Services website states that the majority of people with mental health issues are no more likely than anyone else to be violent or commit violent acts. Furthermore, plenty of research has shown that most psychiatric disorders are not correlated to violence.

A Pew research poll found that both Republicans and Democrats heavily believe that people diagnosed with mental illness should be barred from buying firearms. That belief was similar in gun owners and non-gun owners alike as well.

One in five Americans live with some kind of mental illness.

If one was to look at recent cases of these shootings, they would see a pattern.

An example of a specific case is the shooting in Texas in November 2017. The gunman, Devin P. Kelley, 26 should not have been able to purchase firearms due to two domestic charges he had received while serving in the Air Force in 2012. He had assaulted his wife and broke his stepson’s skull. However, the Air Force never entered his name into the Criminal Background Check System.

Time and time again, we see the shortcomings of the government and the way in which the system that outlines the acquisition of firearms is not working.

Obviously, Americans are concerned about the mentally ill. Unfortunately, barring the mentally ill from purchasing weapons will not solve our problems, and we need more resolve.

Implementing new gun laws in order to extend the process of acquiring/owning guns, create more extensive background checks, and establish the ability to repossess any and all weapons when the gun owner falters will create progress.

Mental illness has simply never played a significant enough role in the mass murdering predicament. Since the general public already believes that individuals with mental illness need to be prevented from buying guns, maybe we should take that time and effort to create a better healthcare system to cater to those with these specific needs. Both mental instability, and gun control are issues in the U.S, but in reference to mass shootings, the main contributor is more than obvious.