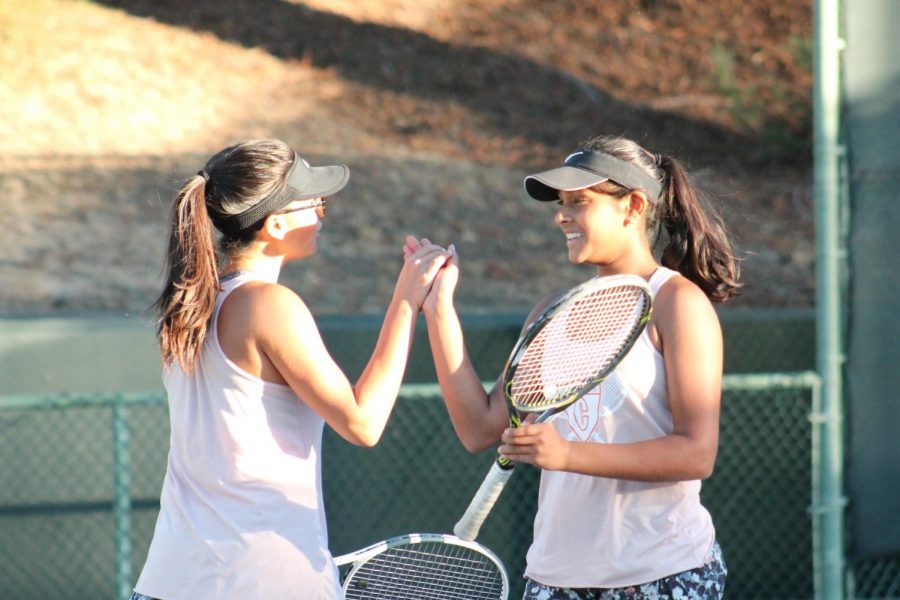 Sophomores Taylor Long, left, and Shrishti Garg celebrate in a match against Amador Valley. The duo won the EBAL Doubles Championship and qualified for NCS.

But after defeating Pleasant Grove in four sets in the opening round of the Division 1 playoffs on Nov. 6, Cal saw its season come to an end in the Northern Region quarterfinals.

Cal earned a spot in the CIF State Championship after reaching the NCS semifinals. The Halloween semifinal showdown pitted Cal against top-seed James Logan, who won in four sets, 25-14, 23-25, 25-21, and 25-7.

Cal reached the semifinals after beating rival Monte Vista in the quarterfinals on Oct. 28.  It was a bitter fight throughout the game with Cal winning the first two sets 26-24 and 25-21.  Monte Vista narrowly beat Cal in the third set, 23-25, but the Grizzlies dealt Monte Vista a fatal blow in the fourth set with a 25-17 victory.

“We made it a point to focus on our inefficiencies at the beginning of the season since most all of us had played together before and continued to work on them everyday thereafter,” said senior captain Jenny Dawson after the team’s win against Monte Vista.

The girls placed third in their league with a 15-3 record.

Junior Sofia Aguilera credited her team’s dominance this season to their excellent camaraderie.

“We have a good balance between hard work and having fun and that’s why we work so well together,” Aguilera said.  “We’re also all really good friends with one another off the court so that helps us play that much better.”

The girls varsity tennis team has accounted for Cal’s only EBAL title this so far this fall when sophomores Srishti Garag and Taylor Long won the league’s doubles title on Nov. 2.

The girls then won the NCS Qualifier (6-3, 7-6, 8-6) to advance to the NCS Doubles Championship Tournament on Monday and Tuesday. Results were not available before The Californian went to press.

“This is my first year playing at NCS and I am very excited about it since we get to play good players,” Graag said.

The tennis team started off league strong this season with consecutive wins against Granada and Livermore. They finished league on a high note on Oct. 30 with a victory over Carondelet.

The Grizzlies finished with an overall record of 7-11.

“It has been a good experience for me,” sophomore Neha Patil said. “I’ve made so many new friends and they’re like family to me.”

The Grizzlies grabbed the No. 2 seed in the Division 1 NCS playoffs after a 7-3 regular season, 2-2 in the EBAL Mountain division, that featured an improbable comeback win on San Ramon Valley turf and a blowout of Dublin to kick off homecoming festivities.

After a first round bye, Cal had three total weeks to prepare for No. 7 San Leandro because the second round game on Nov. 9 was postposed until Saturday because of unhealthy air quality as a result of the fires in Butte County. Smoke has blanketed the Bay Area since Nov. 8, forcing the postponement of most NCS games.

“I feel confident,” senior lineman Keyan Foroodian said. “We’re the higher seed which is rightly deserved and have strengths all around the field.”

The regular season success prompted a higher seating than every EBAL team besides De La Salle, which is in the Open Division.

Cal played in three homecoming games this season and won all of them, beating Foothill 14-3on the road, storming into San Ramon Valley and taking a 21-17 thriller, and then showing off for the home crowd in a 45-0 triumph over Dublin.

As the Grizzly football twitter account posted after the San Ramon game, “Cal High is not a good team to schedule for your homecoming game.”

Cal could face SRV again if both teams reach the finals.

The boys water polo team enjoyed one of their better seasons in recent memory, posting a 13-8 overall regular season record and qualifying for NCS playoffs as the No. 7 seed.

Head Coach Matt Head led the team into Moraga  to take on No. 10 ranked James Logan in round one of the NCS playoffs.

The Grizzlies were able to take care of James Logan, winning 10-4 in decisive fashion. It was Cal’s first NCS playoff win in seven years, with their last victory being a 14-7 win over Alameda in 2011.

Cal faced No. 2 Redwood just a couple days later. Although the severe underdogs, Cal put up a great battle against the Giants, falling 10-8.

Despite initial disappointment, the team realized their great accomplishments reflected on an outstanding season. When asked about his final thoughts on the season, senior Tyler Thomsen described the journey as fantastic, mentioning how great it was to be a part of the team that broke the seven-year NCS winless drought.

The girls water polo team finished the regular season with a stellar 19-4 overall record and a spot in the NCS Open Division playoffs.

They opened NCS playoffs seeded eighth against top-seeded Acalanes on the road.

Unfortunately, the girls were defeated 15-6, but still made a huge impact on program. With one of their highest seedings in program history, the 2018 team left a lasting impression in Cal’s history books and will look to carry that momentum into next season.

Cal’s Sydney Hammill won EBAL MVP, an award given to the best player in the league. The superstar senior acted as a leader throughout the season.

“I think this year has been one of the best seasons in terms of overall team camaraderie. Everybody had a role to play on our team and we all gelled as a group,” Hammill said.

The cross country team ran strong through the 2018 season this fall.

NCS championships will take place on Saturday at Hayward High. The boys and girls both placed second at NCS last season.

“We have a senior, Jacob Millen, who came in third last year at NCS and he will compete to win the title this year,” senior Tanner Draper said.

The EBAL championships took place on Nov. 3 at Shadow Cliffs Regional Park. As predicted, Millen, was one of Cal’s top finishers. Sophomore Madeline Liem was the top finisher for the girls.

The team hopes to make it to the CIF State Championship on Nov. 24 in Fresno.

“There is always something different about the team aspect with cross-country and this year with the addition of so many new faces as well as the high number of seniors on the team, they have been able to set the tone and solidify the expectations we set at the beginning of the summer when we started training.” coach Nick Shea said.

Cal’s girl golf team wrapped up its season on Oct. 29 by placing 10th at the NCS Tournament of Champions at Tilden Park Golf Club.

The team shot 465 at Tilden Park in Berkeley, beating Monte Vista by a stroke. Dougherty Valley won NCS with a score of 377.

Freshman Leah Keswani led Cal with a team low 84. She credited her low score to her determination to improve throughout the season.

“I worked to be the best I could this season by taking small steps and and effectively using practice time,” Keswani said. “I overcame each challenge that came ahead by focusing on one at a time which overall helped my game.”

A rough season by record, Cal competed at the EBAL tournament on Oct. 15, (also held at Tilden Park) shooting a team score of 486 and finishing eighth out of 10 teams.

Although 4-14 in EBAL, the team played many close matches, oftentimes shooting within several strokes of their opponents.

Coach Jacque Bowman, who has coached girls’ golf since 1999 but is retiring in June, had some prudent words of wisdom as to what makes a good golfer on a high school team.

“You have to persevere to compete at golf,” Bowman said. “It’s a game of failure. [Kids] need to be patient, positive, and not give up.  We had a great group of girls and the best overall team we have had at cal for a long time.”