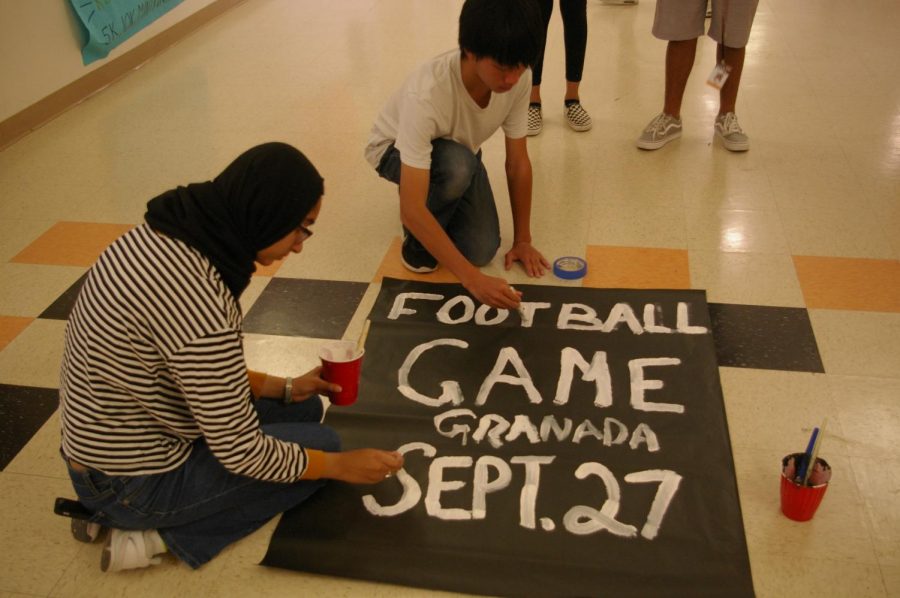 From left to right, freshman leadership students Alizay Iqbal and Christopher Chiang paint a poster to advertise the football game that took place on Sept. 27.

For the first time in Cal High history, leadership has been split into two courses: a general and freshman leadership class.

In fact, Cal was the last of the four high schools in the San Ramon Valley Unified School District to implement this change.

So far, the new class has lived up to that reputation.

The freshman leadership class has 40 students this semester. Next semester, another 40 students will enroll in the class, giving as much exposure to the program to as many freshmen as possible.

In previous years, the general leadership class was able to admit only 10-15 freshmen in the program.

“I think that it’s a really good way to recruit people and train them for when they’re actually going to be a part of this program later on,” Hoang said.

“It’s like a minor league system for the actual leadership class,” Dautel said.

History teacher Hannah Cheng, who serves as adviser for the freshman class, agrees.

“The freshman leadership committees emulate the general third and fourth period ones to have it be a smooth transition if they decide to go into the general leadership class,” Cheng said.

Freshmen in the class have been assigned to one of the 11 semester long committees, including student recognition, campus beautification, and community building.

But with any change as big as this, comes drawbacks. With freshman leadership A period and general leadership in third and fourth periods, communication is still developing.

“Any time you start something for the first time, there’s always going to be some growing pains,” Dautel said. “There’s not an amazing relationship between general leadership and freshman leadership yet.”

But their relationship is slowly growing and developing.

“We talk with Ms. Cheng a lot, and that’s our main point of communication,” leadership class president Audrey Atienza said.

The freshman class officers who are in third period leadership also keep up consistent communication with their freshman leadership class in A period.

“One of [us] officers goes in once a week so that there’s no miscommunication,” freshman class president Lili Loney said.

The separation originally brought mixed feelings among students, but is proving to be a worthy change to the program.

“I didn’t want them to be further isolated,” Hoang said. “I was skeptical at first, but I was pleasantly surprised.”

“I think I definitely liked being in normal leadership as a freshman better,” Hughes said. “But I think if you’re starting off in freshman leadership, it will be beneficial so that they can get a feel for the class.”

Freshmen have been loving the separate leadership course.

“I can feel more comfortable [in the class],” freshman Christopher Chiang said. “There’s more freshmen so I can relate to them better.”

“I feel like sometimes freshmen can be a little shy with upperclassmen, so this way, more freshmen are involved since it’s their community,” Pandya said.

“Hopefully, we’ll see this connect between the grades that we haven’t really seen with previous years,” Dautel said. “I’m excited to see what kind of benefits this [will have on the class] long term.”