Grizzlies gear up for NCS playoffs 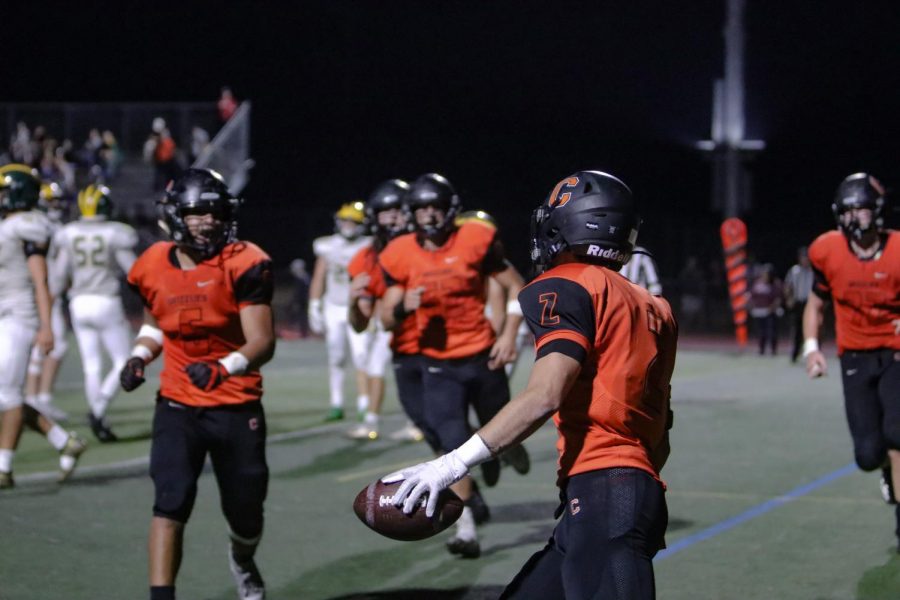 Above, senior Belal Alatasi, right, gets ready to celebrate a touchdown with his unrushing teammates. Unfortunately, the Grizzlies lost the homecoming game on October 25 to San Ramon Valley, 24-21, in the closing seconds of the game.

After starting 6-0 this season, the Grizzlies fell upon hard times with a three game losing streak.

But Cal (7-3) won its season finale against Foothill on Nov. 1, giving the Grizzlies a bit of momentum heading into the first round of the NCS Division I playoffs this weekend.

The NCS postponed the first round of games to this weekend because the Kincade Fire and PG&E blackouts affected many schools in the section.

Cal learned its first round opponent last Sunday after The Californian went to press. The Grizzlies were expecting to play on the road for the first round against a high seeded opponent.

“We need to stay focused and disciplined to have success in NCS,” senior defensive end Austin Anderson said.

In the season finale against Foothill, the Grizzlies wore out the Falcons (5-5) with their strong ground game en route to a 25-12 win.

Running backs coach Chris Torrey said before the game the key for Cal was executing its offense, and that’s exactly what the Grizzlies did in the fourth quarter.

Cal trailed by two points at the end of the third quarter but  then scored 15 unanswered points to close out the game and secure the victory. 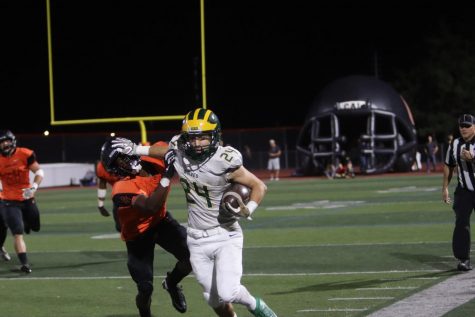 Trying to break a two-game losing streak in their homecoming game, the Grizzlies  were the victim of a fourth quarter comeback by the Wolves on Oct. 25.

San Ramon Valley (7-3) got a bit of revenge against the Grizzlies, who spoiled the Wolves’ homecoming last year in the game’s final minute.

Cal could not stop San Ramon running back Jacob Himan, who rushed for 224 yards and two touchdowns. But the game was still tied in the final minutes when the Wolves drove down the field and set up for the game winning field goal at Cal’s 13-yard-line.

From 23 yards out the Wolves’ star kicker, Chase Salisbury, nailed the field goal to ice the game and secure the 24-21 win.

“I would like to have both of those games back,” sophomore tight end Hunter Holmes said after final-second losses to San Ramon Valley and Monte Vista. “If we had held our lead or had one possession to get a field goal or touchdown, we would have won both of those games.”

At Monte Vista on Oct. 18, Cal led 14-7 late in the game but lost its lead in the closing seconds when Monte Vista scored a short rushing touchdown on fourth down, and then made the 2-point conversion for the victory.

De La Salle has dominated area opponents once again this season and enters NCS as the third ranked team in the state, 18th nationally.

Despite the three-game losing streak, Cal surprised a lot of people this season who might have slept on the Grizzlies and underestimated their talent.

“We weren’t ranked at all coming into the season,” senior running back Daniel DeSoto said.  “We came out with a chip on our shoulder and something to prove.”

Cal has the same attitude heading into NCS, no matter who the opponent is.

The way this season is shaping, Cal could end up playing De La Salle, which has moved back into Division 1 with the elimination of the Open Division, or a high ranked Liberty team. Whomever the Grizzlies end up playing in the first round of NCS it will be a much anticipated, tough match-up.

“Instead of playing De La Salle or Liberty I would like to have another shot at Monte Vista or SRV,” Holmes said.

Clearly the team would like to have those games back.

But the Grizzlies know now that they will have to face one of the best teams in the Bay Area in NCS to keep their season alive.