Should freshmen be allowed in independent PE? 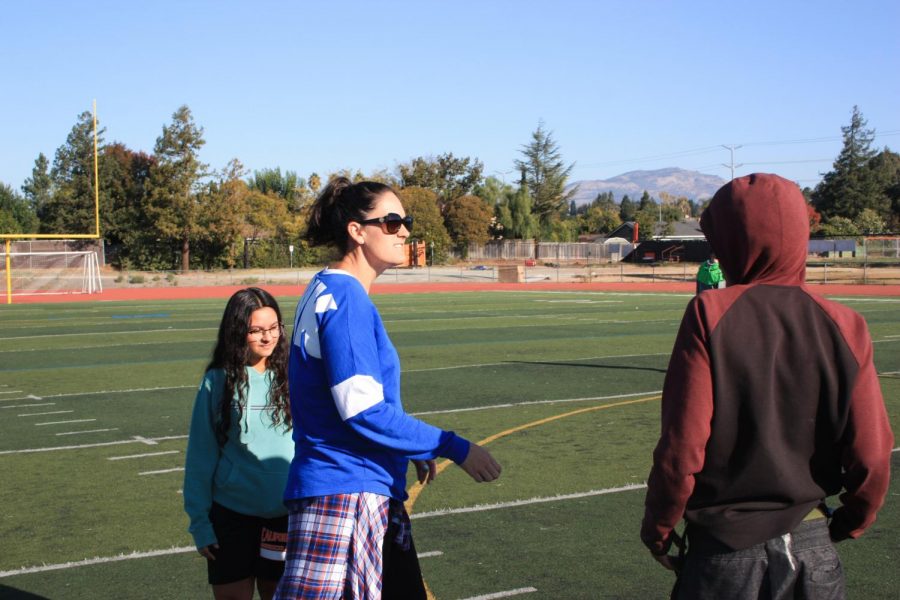 PE teacher Sheridan Kautzmann, left, talks to one of her students during class on the football field.

The teachers’ union has issued a complaint about what it says is the school district’s illegal practice of allowing freshmen to enroll in Independent Study PE (ISPE).

But Katzburg noted that freshmen are not allowed to take ISPE instead of ninth grade PE because the course is required. She said the district is in direct violation of state law by allowing freshmen to skip the mandated PE class for ISPE.

“Independent Study PE is offered between grades six and 12, but ninth grade PE is a mandatory class,” Katzburg said. “We’re concerned that the law is not being complied with.”

Cal High has 27 students, including 20 freshmen, enrolled in ISPE this year, according to school records.

While ISPE gives students the opportunity to choose from a wide variety of sports and exercises, it is not considered a physical education course and cannot replace freshman PE, Katzburg said.

Katzburg and PE teachers also argue that when students take ISPE, they are not receiving all the physical education they need to be healthy.

Cal High PE teacher Lenard Matthews said he is concerned that when students skip freshmen PE in favor of an independent course outside the district, they may not be receiving all the activity they need.

In Matthews’ freshman PE class, a broad range of physical activities, from self defense to ballroom dancing, is covered.

“Just because you’re great at one sport doesn’t necessarily mean you’re a well-rounded person in the realm of physical education,” Matthews said.

To participate in ISPE, students must apply and meet certain qualifications. To receive credit, participating students must meet for at least 400 minutes every 10 days with a certified coach. Students are responsible for keeping a time log and documenting their goals, which will be reviewed by their school’s ISPE coordinator.

Senior Shaun Bhide, who is enrolled in an online ISPE course in weightlifting through Brigham Young University, said taking the class at his own pace is convenient and gives him a lot of flexibility.

“I think taking independent PE was definitely better for me,” Bhide said. “I can fit [the class] into my schedule a lot more.”

Matthews argues that the ISPE requirements have loosened lately and many students have been able to obtain credits even though the rigor of their independent physical activities are not up to standard.

Decisions in setting the baseline requirements for ISPE are made with the representation of PE teachers, said Chris George, the district’s director of instruction services and communications.

He explained that the district, along with a committee of PE teachers, meet each quarter to discuss the physical education programs offered.

“I think everybody involved wants to do what’s the best for the kids,” said George, who was Cal’s principal for most of last year.  “There are great teachers out there who want to make sure that kids are getting a rigorous PE program, and we’re working to make sure that they do.”

When students take PE courses off campus, they are subject to unknown standards that teachers cannot monitor, Katzburg said.

With fewer freshmen taking  PE, the number of classes is decreasing, resulting in fewer teachers being needed to teach these courses.

“We just want to make sure that students are getting the best education possible from the best teachers,” Katzburg said.