Not all moments were memorable for the right reasons 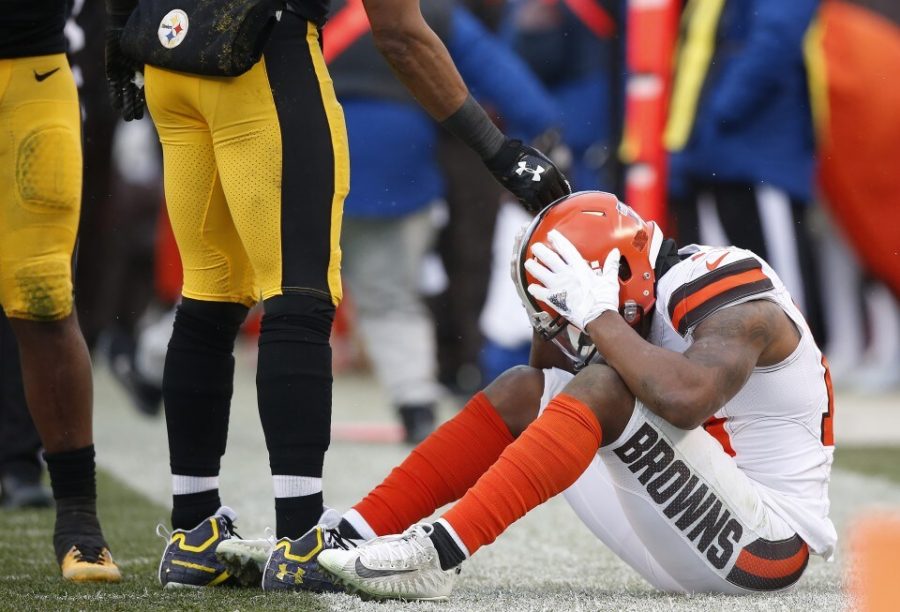 In 2017, the Browns became just the second team in NFL history to go 0-16. Photo courtesy of The Washington Post.

There were many good, and many bad sports moments this decade. Here are the top 10 worst moments in sports throughout the 2010s.
10. Super Bowl XLIX Seattle Seahawks play call
Trailing the New England Patriots by four points, Seattle was close to scoring a game winning touchdown with 24 seconds left. But to the shock of many, Seattle head coach Pete Carroll decided to have quarterback Russell Wilson throw a pass from the one yard line instead of running Marshawn Lynch  in for a touchdown.

The ball was intercepted by Patriots cornerback Malcolm Butler and New England won its fourth Super Bowl.
9. The Tampa Bay Lightning first round elimination
During the 2018-19 NHL season, the Tampa Bay Lightning were the best team in hockey, finishing with a 64-16-4 record. Then the top-seeded Lighting were swept in four games by the No. 8 seeded Columbus Blue Jackets. This is considered one of the most embarrassing first round upsets in NHL history.
8. The Houston Astros cheating scandal
The Astros have won two of the last three  AL pennants. They won the 2017 World Series against the Dodgers and just lost to the Washington Nationals in 2019.

But Mike Fiers, who played three seasons with the Astros and currently plays for the A’s, said that the team stole signs using a camera positioned in center field that was connected to a TV monitor in the team’s dugout.

Players then communicated pitches to batters to gain an edge. When the news came out, fans throughout baseball became furious about the situation.
7. The New York Knicks 2019 offseason
After another disappointing season in 2019, the Knicks had high hopes of signing stars Kevin Durant and Kyrie Irving. Instead, both players signed with the Brooklyn Nets a mere 20 minutes away, ending all hope for Knicks fans this season, and, likely, the next 10 seasons as well.
6. Rams-Saints 2018 NFC championship game
With 1:45 to play, Saints quarterback Drew Brees attempted to throw a pass to wide receiver Tommy Lee Lewis. Rams cornerback Nickell Robey-Coleman obliterated Lewis before the ball could arrive to him.

Saints head coach Sean Payton and fans everywhere thought that it was a pass interference, but referees insisted it was not a penalty. Robey-Coleman himself, thought that it was pass interference. The Saints lost in overtime and the Rams advanced to Super Bowl LIII.
5. Mark Sanchez’s butt fumble
During the 2012 Thanksgiving day game between the New York Jets and the New England Patriots, Jets quarterback Mark Sanchez collided with the rear end of offensive lineman Brandon Moore. This “butt fumble” was recovered by Patriots safety Steve Gregory and returned for a touchdown in the Jets’ 49-19 loss.  The butt fumble remains in infamy to this day.
4. Blair Walsh’s short missed field goal
With 24 seconds left in the fourth quarter of the 2015 NFC wild card game, Minnesota was trailing Seattle by a point when the Vikings brought Walsh in to kick a chip shot 27-yard field goal. Walsh missed it and the Seahawks advanced with a 10-9 win.
3. The Texas Rangers losing consecutive World Series
During the 2010 season, the Rangers finished with a 90-72 record, advancing  to the World Series against the San Francisco Giants. They would be defeated in five games.

The Rangers improved the following season with a 96-66 record and advanced to their second consecutive World Series against the St. Louis Cardinals. In Game 6, the Rangers were leading 7-5 and were one out from their first title when the Cardinals tied the game and won in extra innings. The Cardinals would eventually win Game 7, and the Rangers had their dreams shattered again.
2. The 2013 Toronto Maple Leafs game seven loss
In game seven of the 2013 conference quarterfinals the Boston Bruins started the first period with a 1-0 lead but the Maple Leafs stormed back, scoring four unanswered goals.

But things took a turn for the worse as the Bruins scored three goals to send it into overtime and ultimately win.
1. The 2017 Cleveland Browns
The Browns are widely considered the worst team in North American sports.

They have drafted numerous players who have wound up becoming major busts, including party boy quarterback Johnny Manziel with the 22nd pick in 2014.

But the 2017 Browns overshadowed all other failures in franchise history, going a historically bad 0-16 and  joining the 2008 Detroit Lions as only the second NFL team to lose all regular season games.

After the season ended, Browns’ fans held a parade to  celebrate their unfortunate accomplishment. The Browns have not made the playoffs since the 2002 season and have never reached a Super Bowl