For the second year in a row, the teachers union and district reach an agreement that helps lower class sizes, addresses school nurse and psychologist ratios 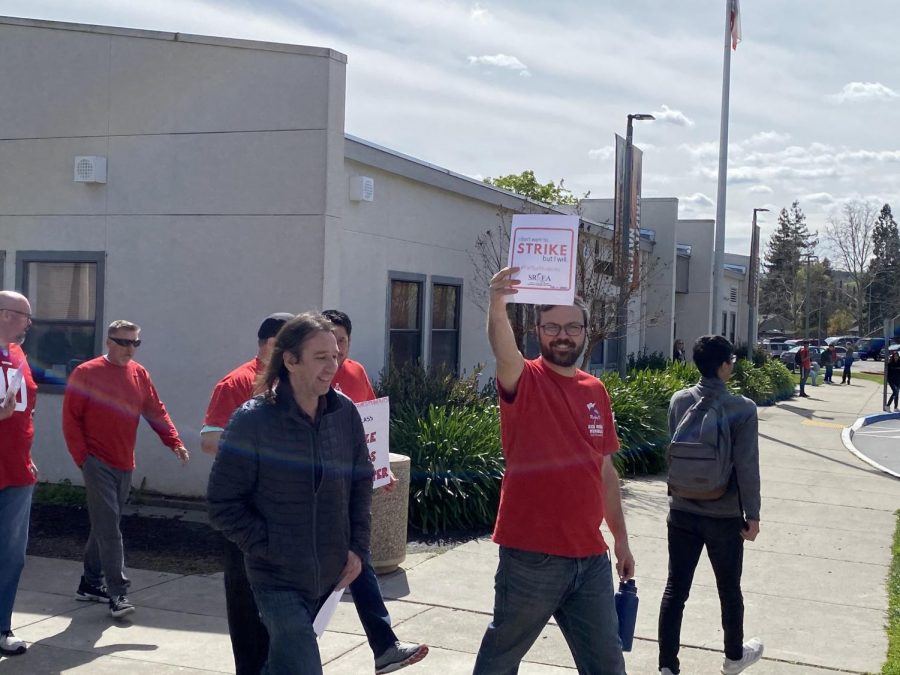 Teachers march in front of the school to communicate their hopes for improving Cal.

Some of the highlights from the collective bargaining agreement include a 2.5 percent ongoing base salary increase for teachers, lower class sizes for elementary schools, and new contract language for school psychologist and nurse staffing ratios.

The teachers union reached a tentative agreement with the district on March 9 that resolved the issue of a potential teacher strike. This agreement fixed all the issues in their previous contract negotiations, union representatives said.

This decision came after a teacher walkout on campus during lunch on March 9, as well as teachers picketing and handing out flyers in front of the school for several weeks. It also came shortly after San Ramon Patch published an article listing the top 10 salaries of district administrators, which totaled more than $2.6 million.

The district had presented its “best and final offer” which included a four percent pay raise but lacked a lot of the union’s requests from last year. This had put the district and the union at a crossroads about a year after teachers nearly went on strike following a stalemate with the district.

This year’s negotiations continued from the union’s battle with the district last year, when the district agreed to include a four percent ongoing base salary increase, a new salary schedule for nurses and speech-language pathologists, caps on class sizes and teacher caseloads, and lower student-to-counselor and student-to-nurse ratios throughout the district.

There was also a debate over the allocation of funds that may be received from schools and communities’ first initiative, which is a California initiative that provides districts with money. For the district, this could be upwards of $18 million.

The union pushed for this money to be spent on students. The Board of Education agreed on the clause last year that they would attempt to secure money from the initiative but had not done so.

This angered the union which, in an open letter to the community, asked for help to “hold elected officials accountable.”

Last year, the teachers rewrote the contract and crafted new articles. The settlement last spring was not properly followed by the district, Sater said.

“The only parts of the contract that have been accepted so far are the things that legally have to be there,” Sater said.

The union worked with the California Teachers Association (CTA) to request more resources and better education opportunities for special needs students, as well as negotiating terms of absences, such as maternity leave.

The resolution was met during the fact finding period. The fact finding period is where the union and district each sent one representative each, which, along with a neutral third party, the public employees relations board, created a three-member fact finding panel. Each party will find data and documentation to support their case.

The fact-finding began on March 9 where both sides presented their arguments.

Teachers could have been heavily affected by this.

“It’s stressful, there are some teachers living paycheck to paycheck and the idea of being out on strike for a week or two could mean people losing their homes,” AP U.S. History teacher Scott Hodges said.

Due to the shortage of subs, a strike would have caused a massive disruption at Cal, and everywhere across the district.

Students seemed to side with teachers in this issue because they realized the mass disruption a strike could have cause.