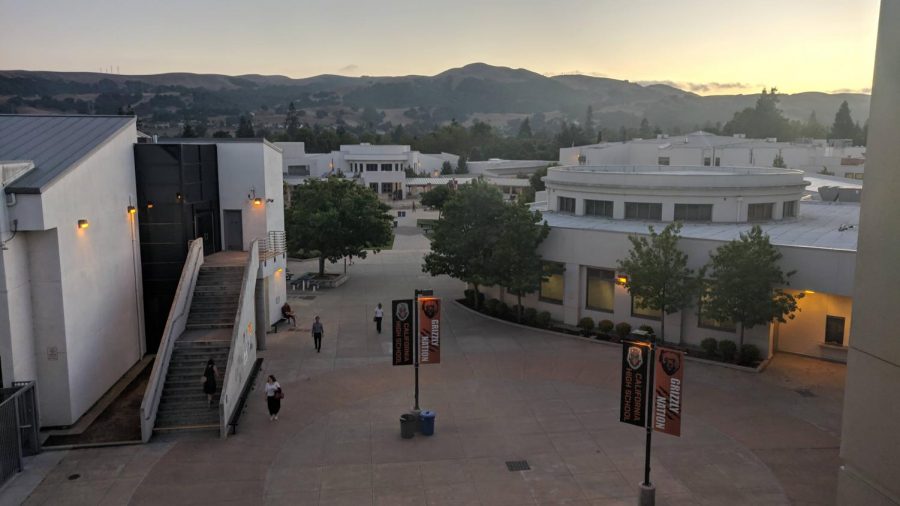 EDITOR’S NOTE: The Californian is profiling the San Ramon Valley Unified School District’s four high schools after a series of stories earlier this year that focused on the drastic increase in intra-district transfers over the last few years.

California, Dougherty Valley, Monte Vista and San Ramon Valley high schools all feature different programs and cultures that could appeal to different students and encourage them to stay or transfer schools. The Californian is featuring each school on a different day this week.

She doesn’t mean everything is perfect at San Ramon’s first high school, which is nearing 50 years old. She seems to be referencing Cal’s diversity and how the school seems to have something to offer for all students.

“I really love the fact that Cal High seems to be much more well-rounded,” Keefer said in an interview with The Californian during the first weeks of school.

Keefer’s right. Of the district’s four high schools, Cal offers the most ethnically diverse student body. It has 43.5 percent white students and 30.8 percent Asian, according to 2018-19 Data Quest statistics provided by the California Department of Education. The only district high school with fewer white students and more Asian students is Dougherty.

Cal also has more Hispanic or Latino students (11.8 percent) than any high school in the district, according to state Department of Education figures. Additionally, 7.1 percent of Cal students are of two or more races, 3.8 percent are Filipino, 2.2 percent are African American, .4 percent are Pacific Islander, and .1 percent are American Indian or Alaska Native.

“Cal High’s diversity isn’t something I’ve really thought about until recently and I’ve realized it makes this school much more welcoming and accepting,” junior Rose Shah said. “When it comes to Cal High’s students and even staff, everyone has a different background and that diversity is something I take pride in.”

The school’s open layout is a major plus for a school trying to embrace such a diverse study body. The quad in the center of campus allows students to walk around and meet new people. With a stage at the front, students are able to play music, eat lunch, and talk with their friends at the heart of the campus.

The welcoming feel of the quad helps the school build community and serve as a designated meeting area for students. Having students coming from all walks of life with so many different backgrounds, from racial to religious to socioeconomic diversity, allow peers to learn from each other.

Cal’s diversity is not only appealing to students, but it’s also one of the main draws that attracts faculty to the school.

Although the student body is what Goldenberg and many others think makes Cal unique, the courses and programs offered do as well.

For example, Cal’s Project Lead The Way (PLTW) medical and engineering pathways offer many courses that make Cal different from other district schools. The two pathways are designed for students who are interested in pursuing these fields in the future. Some students in the district transferred to Cal specifically for these pathways.

“PLTW takes a bigger step than general science classes because of the activities and exposure of new medical terminologies, which is very useful toward pre-med careers,” said junior Amanda Le, who is a student in Human Body Systems, one of three classes in the medical pathway. “It has given me opportunities to visit and interact with medical professionals and taste a piece of what the real world of the medical field is like.”

Global Studies students have their English class with Regina Lyon and then go to Hannah Cheng class for history. The two teachers coordinate what students are learning so literary pieces in English compliment history curriculum.

Other district high schools have adopted this class and added it to their course schedule.

“Relating English and history to each other in lesson plans makes the learning process very easy,” said Joanna Ho, a sophomore in the class this year. “The teachers are so nice, and they make class super fun.”

Something that’s also unique that often goes unnoticed with Cal’s classes because it has been around for decades is its block schedule. Cal is the only high school in the district on a pure block schedule, with three 100-minute periods a day. Dougherty Valley and San Ramon Valley high schools have adopted modified block schedules the last few years.

In addition to some unique courses and a unique schedule, Cal offers many specialized programs – some taught as classes and others offered as extracurricular activities – that have experienced great success.

Cal has been recognized for years as having outstanding drama and music programs. Students in the drama program, run for years by teacher Laura Woods, consistently take home awards from the annual Lenaea Festival and produce outstanding shows each year.

They’re not the only programs to take home titles. Cal’s Model United Nations has developed the reputation as one of the best MUN clubs around. So have the school’s robotics and mock trial teams.

The robotics program had two teams qualify for the state finals this year, while the mock trial team won the Contra Costa County championship and earned a trip to the state finals for their third year in a row, and for the sixth time in the last 10 years.

Cal also has a thriving newspaper and leadership program. Newspaper has won numerous awards locally and nationally over the years, including the Columbia Scholastic Press Association’s prestigious Silver Crown award the past two years.

Leadership, which added a class just for freshmen for the first time this year, serves as a backbone for many student events. Leadership plans all of the standard school events, such as homecoming, junior prom and senior ball, as well as color fest and lip sync, events that are unique to the school.

“Nobody really sees the amount of work they do that is central to the functionality of huge events that people take for granted like prom and ball,” senior leadership student Ro Jayaram said.

The last few years, leadership has also tried to incorporate more events and activities that promote inclusion to help address several racial issues that have arisen on campus. Cal is among several district campuses that have confronted problems with racist graffiti scrawled on campus.

One of the activities was Breaking Down the Walls, which is designed to strengthen a school community by encouraging students to build connections with others understanding and accepting their differences.