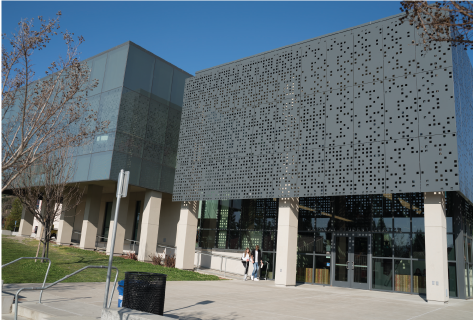 A unique feature of Monte Vista is the school’s student center, where students can study, work on homework or socialize during and after school.

EDITOR’S NOTE: The Californian is profiling the San Ramon Valley Unified School District’s four high schools after a series of stories earlier this year that focused on the drastic increase in intra-district transfers over the last few years.

California, Dougherty Valley, Monte Vista and San Ramon Valley high schools all feature different programs and cultures that could appeal to different students and encourage them to stay or transfer schools. The Californian is featuring each school on a different day this week.

Monte Vista became the school district’s second high school when in opened in 1965 in north Danville near Alamo.

Fifty five years later, the home of the Mustangs has grown bigger than its crosstown rival San Ramon Valley and has developed its own identity as a school that balances strong academics, athletics and school spirit.

“I feel like there is something for everyone,” Monte Vista senior Vandita Sethuraman said. “The overall excellence [at Monte Vista] goes to show that people can come to Monte Vista and be confident that they will find something on campus to be passionate about.”

“We have a Japanese class right now, and they’ll be traveling to Japan this summer,” counselor Christina Byers said before the coronavirus pandemic closed all California public schools and cancelled all district field trips. “Our ASL program goes to San Francisco [to practice]. They have to communicate at a particular place only in ASL and practice their conversational skills.”

The Mustangs also run a highly competitive speech and debate program, which is ranked among the top 10 in the state. Competitors participate in events such as parliamentary debate, extemporaneous speech, and Lincoln Douglas debate. Since 1980, Monte Vista speakers have accumulated 36 state titles and six national titles,” according to the Monte Vista website.

This robust program has more than 100 members and is a seminal aspect of the school. Monte Vista even hosts summer programs for middle school students interested in debate.

Fine arts programs such as choir and band also have consistently performed and excelled locally and beyond.

“The choir program at MV is one of the strongest in the region,” Sethuraman said. “In the past few years, our choir has performed at Carnegie Hall and consistently won first and second place prizes at the Golden State Choir competition. [Everyone in choir has] a common goal of enjoying music.”

“Recently, Monte Vista performed the musical ‘Big Fish’, and it was a huge accomplishment because drama, choir, band, and orchestra all worked together to accomplish one goal,” McDonald. said. “It was a big success.”

Monte Vista also has a strong athletics program and is well known for its women’s soccer and football teams. The women women’s soccer was ranked 4th in the state this season after winning the NCS Division I title. It was the Mustangs fourth championship in the last nine seasons.

Of course, Monte Vista is no exception to the influx of San Ramon Valley residents, as some classes are held in portable classrooms. The school has an average class size of 30 students, according to Monte Vista’s School Accountability Report Card. Nearly 99% of students find themselves graduating in four years.

The school has been renovated and expanded since its inception in 1965. The campus now houses 17 buildings, including the beautiful new Workday Student Center, which was built in 2013.

“The Student Center is super popular,” Monte Vista junior Joshua Ye said. “People eat lunch, hang out after school, and do homework in there all the time.”

The programs, facilities, and athletics at Monte Vista combine to create a school culture that many students feel is welcoming and inclusive of a variety of interests.