Junior might have earned the CAASPP Carnival, but it's questionable if they really wanted it 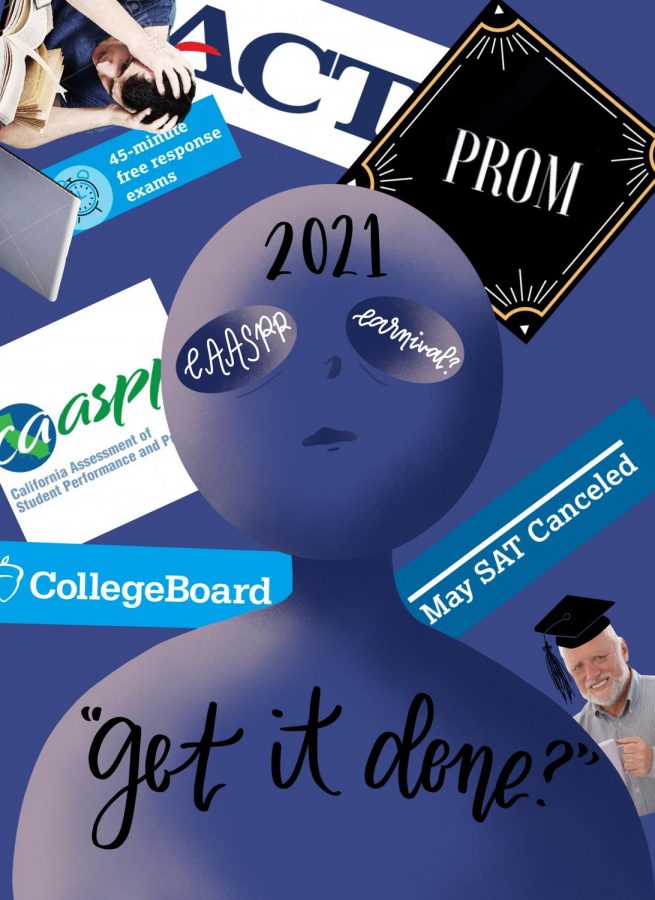 School was cancelled halfway into the junior class' CAASPP testing. What will become of their promised carnival?

I’m definitely not the first to say or feel this: I am straight up not having a good time right now.

School has been pretty much canceled through the rest of the year and with it, every fun activity. We have lost graduation, senior ball, junior prom, spring sports and shows, spring trips, senior picnic, and the ability to have our second semester grades boost our GPAs. And those are just items I can think of off the top of my head.

But there is one event that the student body is completely ignoring in its collective mouring: the CAASPP Carnival? Yes, the CAASPP Carnival, an event slated for Friday that, to nobody’s surprise, everyone seems to have forgotten about.

For the first time this year, school administrators had a the bright idea to get juniors to actually care about standardized tests. That idea was an incentive junior carnival on May 15 during lunch. Because nothing says “We have a strong work ethic at this school” quite like a bribe.

This carnival, or the “‘21 Got it Done Carnival”, meant an extra block of time during lunch to do…a party, I guess? To be honest, nobody really knew what exactly the carnival entailed.

Let’s be real. This carnival was probably going to consist of pop music from 2015, one of those ridiculous gaming trucks that the same six people use the entire event, and a heavy dose of juniors standing around waiting to go back to class after lunch.

But that doesn’t mean we didn’t want any carnival at all!

Honestly, we were all ironically excited. The seniors may get their picnic, but finally we juniors were going to have an event of our own, a carnival that celebrates our work ethic after not one of us put in any work for this thing. At the very least, we were ready for the legendary inside joke that would inevitably become the CAASPP Carnival.

Was it a laughing stock of the Class of 2021? Oh yeah. Did any of us bother trying on our CAASPPs? Absolutely not. But I think we all were counting on that extra lunch, and making fun of whatever administrators came up with.

I can’t help but feel duped. We did, after all, take both the math and English portions of the CAASPP test before the coronavirus pandemic sent us home for the fourth quarter. If I had to suffer through questions about the volume of oversized coffee pots, I should be entitled to a reward.

I’m not saying I tried on the CAASPP. I didn’t. And I’m assuming neither did anyone else. I gave up after I couldn’t explain how fast a paper towel could clean up coffee. But technically speaking, the Class of ’21 DID get it done. Now where’s our bribe?

It is a right of teenagers to ruthlessly make fun of everything and everyone. At the top of that list is school officials and events. Not only are we losing a precious longer lunch period, but we’re losing the thing that makes us whole – sarcasm in the face of authority.

I understand the disappointment of the class of 2020. They don’t get to have a ball, picnic, graduation, or senior trip, and that sucks. But they could have just a little bit of empathy for the poor Class of 2021.

Juniors don’t get a prom (though there’s always next year) and our SAT dates are being canceled left and right. Now, on top of all the stress of not shopping for prom outfits next year and studying for the SATs, we don’t get to celebrate the completion of standardized tests.

Think of the joy a carnival would have brought the outgoing seniors, who didn’t get any bribes – I mean, incentives- to complete their CAASPP last year. That is, assuming they would have been able to attend the carnival. Who was allowed to go again? This thing was so poorly thought out, nobody knew who was going to be there in the first place.

At this point, it’s safe to assume the CAASPP Carnival is dead. May it Rest In Peace. There’s nothing left to do but pass the torch to the sophomores. Let’s hope the Class of 2022 can get it done too. (It still rhymes, but it’s not as cool).

Oh CAASPP Carnival, you were ripped so soon from us. Instead of extra lunch and a party on Friday, I’ll be taking my postponed APUSH AP Exam. Yay.

Consider this a plea to administrators to consider pushing the carnival to the fall, despite the fact that we didn’t complete all parts of the CAASPP test. It’s not the quality of work, it’s the quantity. After all, if the juniors take a standardized test and nobody is around to throw them a carnival, did ’21 really get it done?