Schools worldwide have responded to coronavirus pandemic in different ways

From the U.S. to Italy to Singapore, public, private, and boarding schools have taken different measures to ensure the safety of their students while continuing with their education. 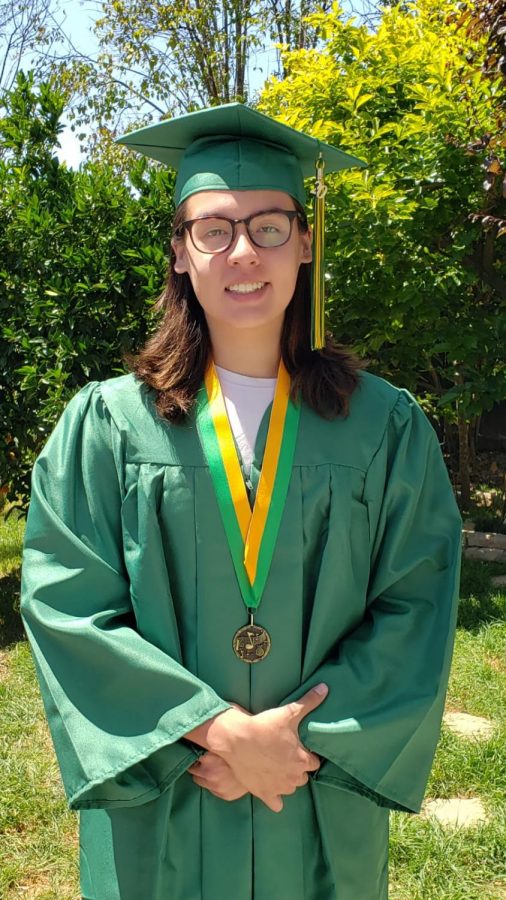 Sterling Daly is a graduating senior from Castro Valley High School. Due to the closure of schools, he celebrated his graduation at home.

Schools from all over the world rushed to take action when the coronavirus pandemic spread in February and March, forcing most schools to close.

In the urgency to set up virtual education, different schools nationwide and internationally have taken very different approaches to accommodate their environment amidst COVID-19. Here’s how some schools handled providing education during a pandemic:

When Alexander Bautista from Deerfield Academy went on spring break in mid-March, he had no clue that he wouldn’t be going back to school.

Since Bautista goes to a boarding school with many international students, the school had very little time to decide when to close, as the growing pandemic became a big liability risk for Deerfield.

“Our headmaster was pretty adamant about keeping the school open,” Bautista said. “A lot of the seniors wanted to have their graduation ceremony so they kept the school open for as long as they could.”

The school started online classes on March 30 and was planning to extend spring break until April 2, but this quickly changed because Massachusetts’ state law prohibited out-of-town students, such as Bautista who is from Chicago,  from returning after their break. Since then, students have been attending classes online.

“We have two hours of what we call ‘synchronous time’ for each class per week,” Bautista said. “I meet with three classes on Monday, four on Tuesday, and these change every day.”

The school gives students Fridays off and changed classes pass/fail. Students are supposed to be given two hours of homework per class, but Bautista admits that some teachers have supplied him with a heavier workload and some have barely given him any.

Since Deerfield Academy is a boarding school, many of the students’ belongings are still in their dorms, which is a problem for those who have left clothes and essential items behind.

“I know for my dorm, [the school] emailed all the students that they were going to be packing up our rooms and moving our stuff to a separate room,” Bautista said. “If we needed anything from our dorms, they would mail it home free of charge.”

Although the school will be closed for the rest of the year, Bautista hopes the seniors will at least be able to attend graduation.

Celine Zheng from Southridge School has been finishing up her studies in her last year of high school over Google Meet after spring break ended. In British Columbia, there have been more than 2,000 confirmed cases of coronavirus.

“British Columbia is doing pretty well compared to the other [Canadian] provinces, so there’s a chance we might be able to go back [to school] by early to mid June,” Zheng said.

With the hope that school may restart if the number of cases in B.C. decreases, Zheng wishes people would take the pandemic more seriously.

“There are not very many people wearing masks around, but everyone keeps their distance,” Zheng said. “I wish people would take more precaution, especially when walking outside.”

Castro Valley High, located about 10 miles west of San Ramon along I-580, closed on a whim on March 13, after Trump declared a state of national emergency on the same day.

“The school first decided not to close until we had a case [of coronavirus], but they closed school anyway.” senior Sterling Daly said.

Castro Valley re-opened campus the following Wednesday so students could retrieve Chromebooks and any other school supplies they didn’t have at home. The following week, online school started with the pass/no-mark system.

Daly said that in the beginning, teachers were assigning a heavy workload before gradually easing up on the homework after some complaints from students.

He wished that the school was able to provide more emotional support for students during this time because Daly said many high schoolers look to school as an escape from home.

“A lot of students are stressed out and don’t have anyone to reach out to during these times,” Daly said.

COVID-19 hit Singapore early compared to the rest of the world, but the country had taken massive precautions to keep its citizens safe. Once the amount of coronavirus patients reached 30, the government encouraged citizens to maintain personal hygiene and stay home when sick.

The government was ready to tackle the pandemic head-on, as were the schools.

“Even before the announcement of the closure of school, the teachers prepared us to test the platforms that we would potentially be using for online learning so that we would be clear about what to do,” said Avianna Yu, a first-year junior college student.

After the closure of her school on April 7, Yu started home-based learning, which required all schoolwork to be completed over the course of a month and either printed and submitted or uploaded online.

“I would have liked it if my school distributed all the resources for that one month,” Yu said. “Other than that, I felt [that] my school was pretty efficient in terms of preparing us for online lessons.”

Many of her school’s yearly affairs were cut short or canceled in wake of the growing pandemic. Now with Singapore issuing a quarantine, Yu isn’t able to see her friends and extended family but she keeps in touch with loved ones as much as possible.

“With more time at home, many people [have] started to discover new hobbies like cooking, sewing, and drawing.” Yu said. “Whether for better or worse, I would say that life in Singapore has changed pretty drastically since the coronavirus.”

Rosanna Nesti is a senior in a linguistic high school in Italy learning English, Spanish, and Chinese. Her school closed on March 5 and started online learning the following week.

At first, her school opted to teach one subject per day, but then changed to a more structured schedule. The students have five hours of lessons a day, which is what Nesti considers to be very similar to her classes before online learning started.

“Sometimes at the beginning of the lesson, [the teacher] asks us what we studied last time and he evaluates us with a plus or minus,” Nesti said. “After lunch, I usually have to study for the next day and [then] put all the exercises that I did in the virtual classroom, so the professors can see if I did the homework and understood the argument.”

Since the start of quarantine, Nesti hasn’t gone out into the public because Italy was ravaged by the pandemic. During this time, her family was concerned with the situation, but now things have calmed down a bit for Nesti and her family.

As the curve is starting to flatten and many places are getting ready to lift shelter-in-place orders, many students are hoping to return to on-campus learning by their next school term. In the meantime, schools from all over the world are trying their best to keep their students and families safe during this uncertain time.