Protests against police brutality, racism have spread like wildfire throughout the country 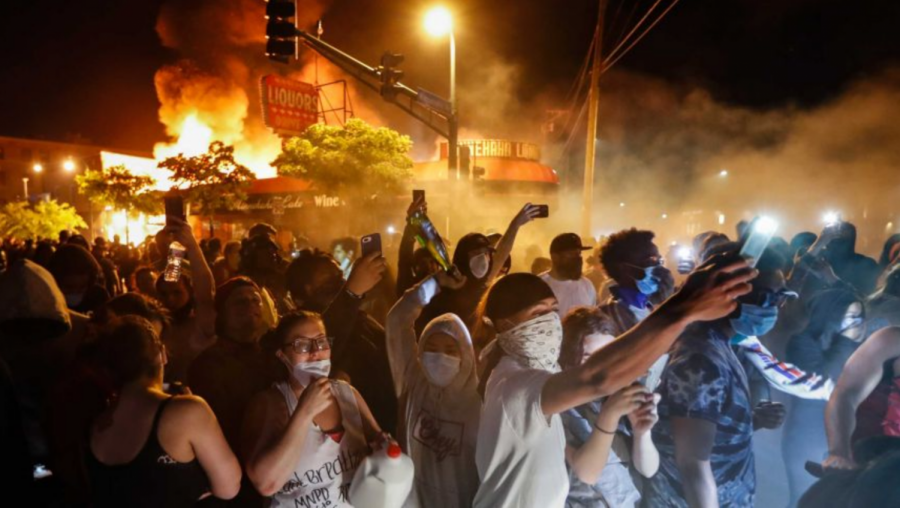 Reporter Ricardo Lopez from The Minnesota Reformer was at the site of a protest in downtown Minneapolis when a riot was taking place.

Although the looting that continues to occur after the murder of George Floyd on May 25 is disgraceful, the protests starting in Minneapolis and spreading to cities across the country remain largely justifiable.

Because on that fateful night, police officer Derek Chauvin kneeled on Floyd’s neck for almost 10 minutes and killed him. Floyd, a 46-year-old African American man, told the officer, “I can’t breathe,” and bystanders told Chauvin, who is white, to stop choking Floyd.

Keep in mind, police were initially called to Cup Foods, a convenience store in Minneapolis, because a worker reported that Floyd used a counterfeit $20 dollar bill to buy cigarettes, according to CBS Minnesota.

Since then, protests have occurred in Minneapolis and neighboring Saint Paul, and have spread to cities across the country, including Berkeley, Oakland, Hayward, and San Jose. Protesters are calling for justice for Floyd and other black Americans killed by police.

Some of the protests in Minneapolis-St. Paul evolved into riots, resulting in more than 170 buildings being damaged in St. Paul alone as of the morning of May 29, according to a tweet from St. Paul Police Department.

But many of the protests have been peaceful.

KSTP reported that protests outside Chauvin’s house in the Minneapolis suburb of Oakdale remained largely peaceful and that nobody was injured.

The fact that some protesters have resorted to destruction of property doesn’t negate the validity of the protests’ goals and aims.

No self-respecting American would call the Sons of Liberty “thugs” for carrying out the Boston Tea Party or for tarring and feathering British officials, despite the destruction of property and violence involved.

I have seen comparisons made and memes floating around praising the Civil Rights Movement of the 1950s and ’60s as peaceful in comparison to the violent riots occurring in Minneapolis-St. Paul.

But this doesn’t paint an entirely truthful picture of the Civil Rights Movement. The Birmingham riots of 1963 included black protesters who threw rocks at police officers, according to a May 11, 1963 issue of the Pittsburgh Post-Gazette. The violence seemed to influence then-president John F. Kennedy to support more Civil Rights legislation.

“Birmingham forced the President to recast his policy. He has publicly and strongly intervened. He has proposed important new legislation to Congress,” states a summary of the American government’s reaction to the riots found in the UK’s National Archives.

Just as we can look past the violence of the Civil Rights Movement and acknowledge that its goals were justified, we can do the same with the protests occurring right now.

The events in Minneapolis show not just an example of police privilege, but also a dangerous attitude toward freedom of the press.

On the morning of May 29, CNN reporter Omar Jimenez and his production team were arrested by state police. Live footage tweeted by CNN shows Jimenez asking police where the production team should move, followed by Jimenez’s arrest. They were supposedly arrested for not moving when the police told them to.

The team was later released without any charges and Minnesota Governor Tim Walz apologized for the arrest, according to the BBC.

The ability for journalists to report stories without fearing arrest is an important part of any democracy.

The firing of the four police officers involved in the altercation with Floyd, the arrest of Chauvin on the morning of May 29, and the charging of Chauvin with third-degree murder and manslaughter on that same day are all important steps in bringing justice to Floyd’s family and to the American people.

But protests and riots will continue to dominate our television screens and our consciousnesses every time a policeman murders a civilian, until comprehensive reforms have been implemented in police departments across the country. Such reform will benefit not just black Americans, but all Americans.

As the great Dr. Martin Luther King said in a speech given at Stanford University in 1967, “I think America must see that riots do not develop out of thin air. Certain conditions continue to exist in our society which must be condemned as vigorously as we condemn riots. But in the final analysis, a riot is the language of the unheard…  And as long as America postpones justice, we stand in the position of having these recurrences of violence and riots over and over again.”

Because if you or I had kneeled on a man’s neck for eight minutes and killed him, we would be put in juvie or prison without question.