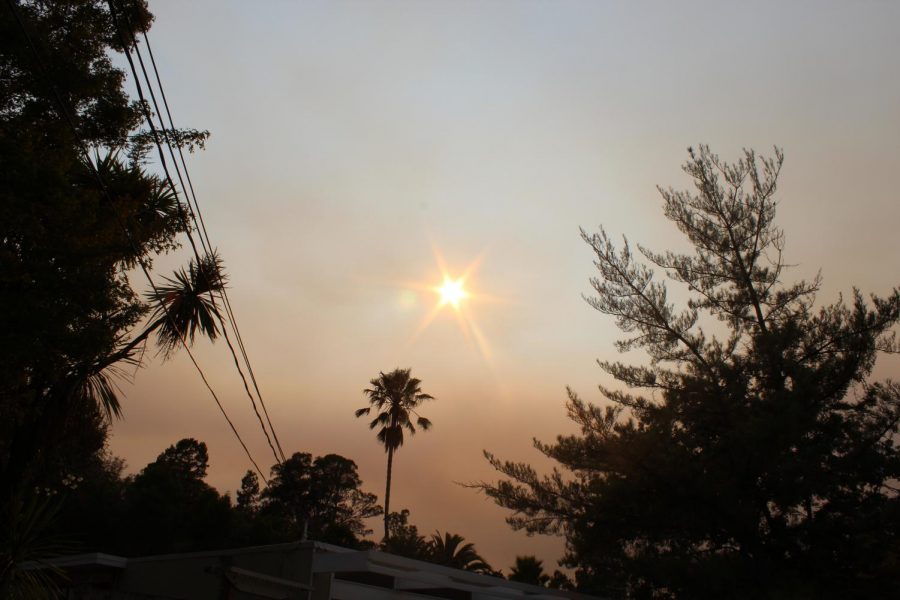 Smoke from the fires have covered skies like fog.

California’s fire season unfortunately got a head start this year thanks to an extreme heat wave and unseasonal thunderstorms.

Around 12,000 dry lightning strikes struck over a 72 hour period starting Aug. 15, causing fires to spark up all over the Bay Area and throughout Northern California.

There are 625 wildfires burning through the state, leaving over 1.4 million acres of land destroyed. Over 14,000 firefighters have been deployed, but California is still struggling to contain the flames, according to the live update given by Gov. Gavin Newsom on Monday, available on YouTube.

Newsom declared a state of emergency due to the ravaging fires amid the heatwave on Aug. 18.

“Just a week ago I announced that we are struggling to address the needs of suppressing some 376 fires in the state, that number has grown to about 625 fires in the state of California,” Newsom said during the live update.

The LNU lightning complex in Sonoma, Napa, and Solano counties is the third largest fire so far reported in modern California history, Gavin said. The fire has been active for six days, burning through more than 350,000 acres of land, according to Cal Fire. About 22 percent of the fire has been contained so far.

The SCU lightning complex is the second largest fire recorded in state history, burning over 360,000 acres of land in the past five days in Santa Clara, Alameda, and Stanislaus counties. About 10 percent of it has been contained.

The CZU lightning complex in Santa Cruz and San Mateo counties also has burned through 78,000 acres of land over the course of six days as well. This complex is 13 percent contained.

Cal High alumnus Ryan Walters, who graduated in 2012, is now fighting to contain the CZU lightning complex with Cal Fire.

“[Santa Cruz County] has very unique challenges with its steep rugged terrain and densely populated mountain towns,” Walters said. “The fire is burning in a very remote area which only provides us the opportunity to contain it when it gets closer to town and local roads.”

More than 119,000 people have had to flee their homes to evacuation shelters, sparking concern about the spread of coronavirus.

“Our biggest priority is to evacuate the citizens who haven’t already and to protect all the structures we can as the fire burns through the town,” Walters said.

He along with his fellow firefighters are having to battle the fires in 24 hour shifts, keeping them away from their families and friends while putting themselves in harm’s way.

There have been seven fatalities, one of whom was a pilot flying a helicopter in the midst of all the smoke in hopes of helping suppress the fire.

“When we talk about bravery we talk about the bravery of men and women putting themselves not first, but putting you first, your life first,” Newsom said after addressing the fatalities during his live statement on YouTube.

More than 12,000 reported structures have been destroyed, but according to Newsom it’s safe to say that that number is significantly higher.

Newsom also addressed the nationwide help that California is receiving. He said 10 states have already donated resources and personnel. President Trump has approved a Presidential Major Disaster Declaration to support the state, providing resources and more flexibility of the spread of resources throughout the counties.

San Ramon has also faced a fire of its own, bringing the air quality index (AQI) to hazardous levels as high as 387 on Sunday, according to AirNow.gov.

A vegetation fire sparked Sunday near Wildhorse Drive and Derby Drive in San Ramon worsened the already unhealthy air quality in San Ramon, according to PulsePoint.org, a non-profit that works on keeping citizens informed of surrounding emergency situations.

“I checked the air quality [Sunday] morning around 11 to see if it was healthy to walk my two dogs, and [AQI] was 86 which I thought was healthy enough,” Cal High freshman Cole Fokas said.

By the end of Fokas’ walk, the AQI was at 158, almost double the amount it was at the start.

“It didn’t smell like smoke at all and it was fairly clear when I started the walk, and then by the time I got home, it was the smokiest I had ever seen it and you could smell it everywhere,”  Fokas said.

The AQI in San Ramon and the surrounding East Bay has continued to stay at an unhealthy level since then, giving the smoky skies an eerie orange glow.

With all the fires rampaging through the state, it’s important to address the progress that is being made.

“We are making progress everyday,” Walter said. “As long as the weather cooperates with us we will continue to improve the containment lines.”