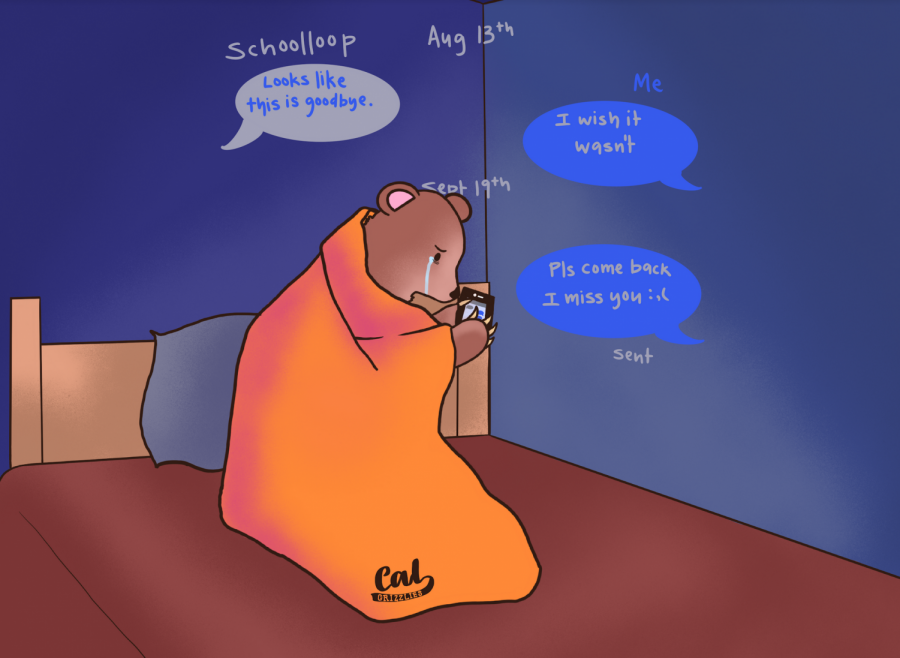 Just when you thought it was safe to check your grades again, Schoolloop returns with a vengeance and tempts students to their "swipe to refresh" lives. Oh, the horror!

It was the night of Aug. 10. Summer break lurched toward its end, the coronavirus pandemic continued to rage, and full time virtual school drew closer and closer each day.

Thousands of Cal High students, including myself, were anxiously waiting to get our schedules on Aug. 12, but a quick glance at Schoolloop revealed to us what we longed for.  Schoolloop came through in clutch that night and was there for us when Infinite Campus wasn’t.

Unfortunately, if you tried to access that sweet, sweet Schoolloop the next day, you were met with a message denying your entry.  Just like that, it was gone, never to be used again for the remainder of the school year…or so we thought.

Assistant principal Jeff Osborn said there have been problems with Schoolloop in the past because it’s based on an older platform.  Osborn explained that the district wanted to try a new way of publishing grades and saw this year as the perfect opportunity.

I remember hearing the dreaded confirmation that Schoolloop was defunct, and thinking, “What am I going to do without my favorite social media app?”

In years past, I considered myself a Schoolloop addict. I would compulsively check my grades at least five times a day, and gaze into the ever expanding list of assignments with a hypnotized stare.

Weird as it may be, I wasn’t alone with this obsession. Senior Ana Cabral said she’d check Schoolloop at least three times a day, every day, to stay informed on her grades.

“I literally panicked,” Cabral said concerning the news of Schoolloop meeting its untimely demise. “I didn’t know how I was going to keep my grades in check without checking them constantly.”

To me, Ana, and I’m sure many others, this was normal behavior. But those around me would question my obsession with this helpful tool.

“You’re obsessed!” my mom would often say if she caught me staring into the fascinating, green, overlapping ovals of the Schoolloop logo.

Nonetheless, I was saddened to hear about this end of an era, and justifiably concerned that my grades would be less accessible.

Interestingly enough, this fear of mine quickly became less relevant, and, to my surprise, I found myself missing Schoolloop less and less.  It seemed I was making progress on a 12-step program of my own, overcoming my crippling Schoolloopism with haste.

No longer would I feel the overwhelming and paralyzing urge to constantly check my grades, refreshing the page over and over again just waiting for a number on a screen to go up or, hopefully, not, down.

Instead, I found myself more focused on learning and enjoying the content of my classes to the fullest, rather than just trying to make the grade.  While I’d still occasionally check my grades on the ever so inconvenient Infinite Campus (YUCK!) I didn’t see it as much of a concern compared to when I had Schoolloop in the literal palm of my hand.

But then in a dramatic turn of events (cue the dramatic music), Schoolloop made a comeback.  I won’t lie, initially, I was as hyped as a teacher sending their students to breakout rooms. I was ready for it to be back and better than ever.

Osborn explained that this decision came after the teachers union asked for Schoolloop to be reinstated.

On the student side of things, it seemed to be a welcome homecoming for our previously dearly departed Schoolloop.

“It made life easier,” senior Alina Naveed said. “When grades were posted on Google Classroom or Infinite Campus, I didn’t check them once.”

Looking back on my past few weeks of school though, I’m not so sure I’ll welcome Schoolloop back with open arms.

Do I really want to revert back to my compulsive “swipe to refresh” self?  Will I find the same need to check my grades constantly after my Schoolloop disillusionment?  Will I delete Schoolloop entirely to curb my obsession?

I guess I’ll just have to wait and see.