With the coronavirus posing a threat, millions of people are sending in their ballots by mail 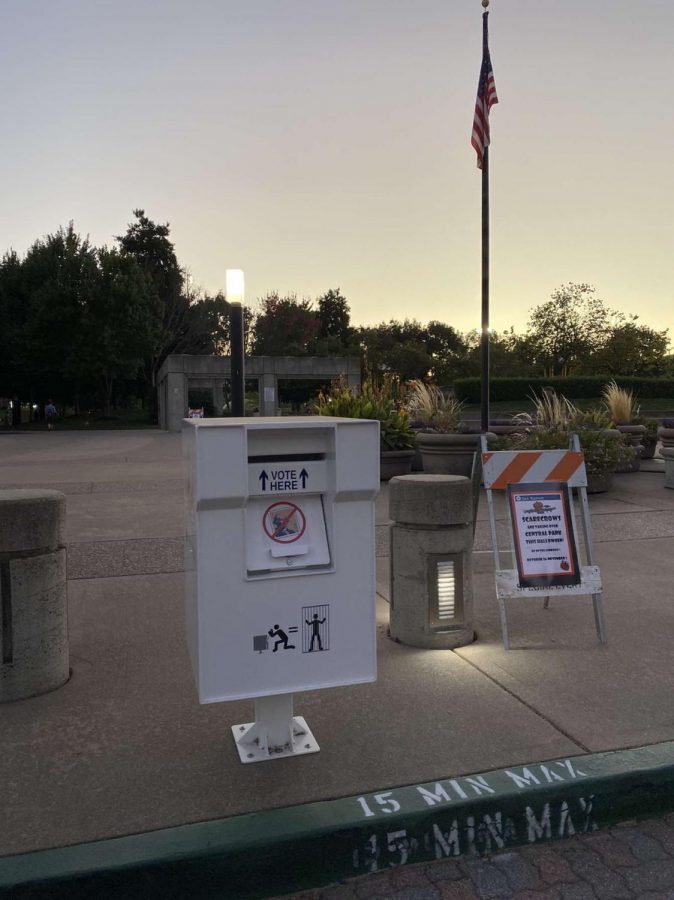 This ballot drop box in front of San Ramon City Hall can be used for voters who prefer to mail their ballots instead of standing on line.

This story can also be viewed in our November 2020 Features Issue under the Print section of our website.

Millions of California’s voters will be voting in this most-unusual presidential election.

Some will have made their selection at the polls on Nov. 3, but many others will have sent in their ballots through the mail for the first time, not even needing to leave the comfort of their homes to influence the outcome of an election that’s taking place amidst a global pandemic.

Several states, including California, have implemented a striking change in ways their citizens can vote due to concerns regarding the coronavirus pandemic.

This year, Washington, D.C, Nevada, New Jersey, Vermont, and California have begun to automatically mail ballots to every one of their registered voters, giving them the opportunity to vote without crowding the polls in an attempt to prevent the spread of COVID-19. They are joining Utah, Colorado, Oregon, and Hawaii, which just imposed the change last year.

“Given that hundreds of thousands of Americans have died from COVID-19, if you asked millions of Californians to vote on the same day within a 10-hour window, that could potentially spread the disease,” Cal High government teacher Edgard Vidrio said. “Everyone was able to receive a ballot in the mail this year.”

All registered voters in California received their ballots in the mail by Oct. 5. In order to be counted, the ballots must be postmarked or dropped off in an official ballot drop box by Election Day.

Many Cal High students and alumni are excited about the opportunity to vote for the first time.

“This is the first year I’ve been of legal age to vote,” 2020 Cal High graduate Takeshi Kawata said. “I was raised thinking that it was a civic duty to take part in electing your representation.”

Safety restrictions related to the coronavirus will make Kawata’s first time voting a completely different experience. This election day, he won’t be waiting in line at the polls or filling out a ballot concealed behind a divider like most Americans are accustomed to.

“Automatically receiving the ballot is a really good thing, because if you were going to vote, you get to have it conveniently delivered to you,” Kawata said.

But President Donald Trump has repeatedly challenged the states that have decided to send their voters what he calls “unsolicited” ballots.

“As far as the ballots are concerned, it’s a disaster,” Trump said during the presidential debate. “This is going to be a fraud like you’ve never seen.”

Trump made clear the difference between “solicited” and “unsolicited” ballots, stressing the importance of absentee ballots being requested individually, not sent to everyone. He also pointed to several incidences of fraud, most for which he provided little to no context or details.

While the president’s claims may have little evidence to support them, they do have a ring of truth to them.

“If I have my mother-in-law and my mother living with me, could I take their ballots and sign them for them? Yes,” Vidrio said. “The possibility is there, but the state and other officials are hoping that’s where the computer tech and the human eye test will come in handy.”

Each mail-in ballot requires the voter’s signature to be matched with the signature the government has on file, which is most likely the one from voters’ driver’s licenses. They’ll be matched using a computer system, and if any ballots are flagged, then they will be manually verified by election officials, minimizing potential fraud.

California’s verification system is lax in comparison to the systems in other states.

In states like Alabama, two witness signatures or a signature from a notary public are required for votes to be counted. Though the rules vary from state to state, each one has its own laws to prevent fraud.

“I don’t think that voting by mail opens up any more opportunities for fraud than any other system,” Kawata said.

Instead, he appreciates the convenience and safety that the new system provides.

“Because of corona and everything that’s going on we wouldn’t have felt safe,” Kawata said. “I just feel more comfortable voting from my own home than going somewhere else, because if you go outside your own house people might attempt to pressure you.”

Trump has continued to oppose automatically mailed ballots. Several minutes spent scrolling through his endless Twitter storm show him predicting “MAYHEM” and “the most corrupt Election in American History” to ensure if unsolicited ballot states continue what they are doing.

Trump’s message was still somewhat unclear, rife with contradictions. Multiple tweets* pointed to small-scale fraud in states with requested absentee ballots, not unsolicited ballots, even though Trump asserts the former is safe and secure. In an Oct. 9 tweet, he encouraged Coloradans to vote with the unsolicited mail ballots being sent out that day.

Additionally, the states that have practiced sending ballots to all voters have not had any major cases of fraud or difficulty counting votes. Most have programs like BallotTrax that allow voters to track their ballots and make sure they are counted.

“[Trump’s] trying to scare people into thinking that it’s not legitimate,” former Vice President Joe Biden said during the first debate on Oct. 7. “Remember, you have it in your control to determine what this country is going to look like in the next four years.”

Regardless of who emerges victorious from the election, the prospect of sending so many votes through mail has also brought about concerns of counting delays causing the winner to be uncertain on Election Day.

California’s own voting rules are a cause for concern. While ballots must be postmarked by Election Day, they don’t have to be received by county election offices for up 17 days afterward in order to be counted, according to howto.vote.

Mail-in ballots also take longer to count because of how they are verified. Each has a signature on it that must be matched with its sender’s signature on their registration card in order to be counted.

Usually, the result announced on Election Days is an educated guess based on who won which states’ electors. In 2016, it took a month to count all of the votes, and while Hillary Clinton won the popular vote, Trump had already secured the right amount of states and their electors to win. The Electoral College did not actually vote until mid-Dec., but since electors nearly always vote for the candidate they are expected to, the early projections are usually correct.

In 2020, it will be much more difficult to make an accurate prediction on Nov. 3.

“There is a real potential that in a few swing states, in some too close to call states, we may not have an answer on election night,” Vidrio said. “I think that the media will try their best to not be too eager to call a state if it’s not decided.”