“Among Us”: saving 2020 one emergency meeting at a time 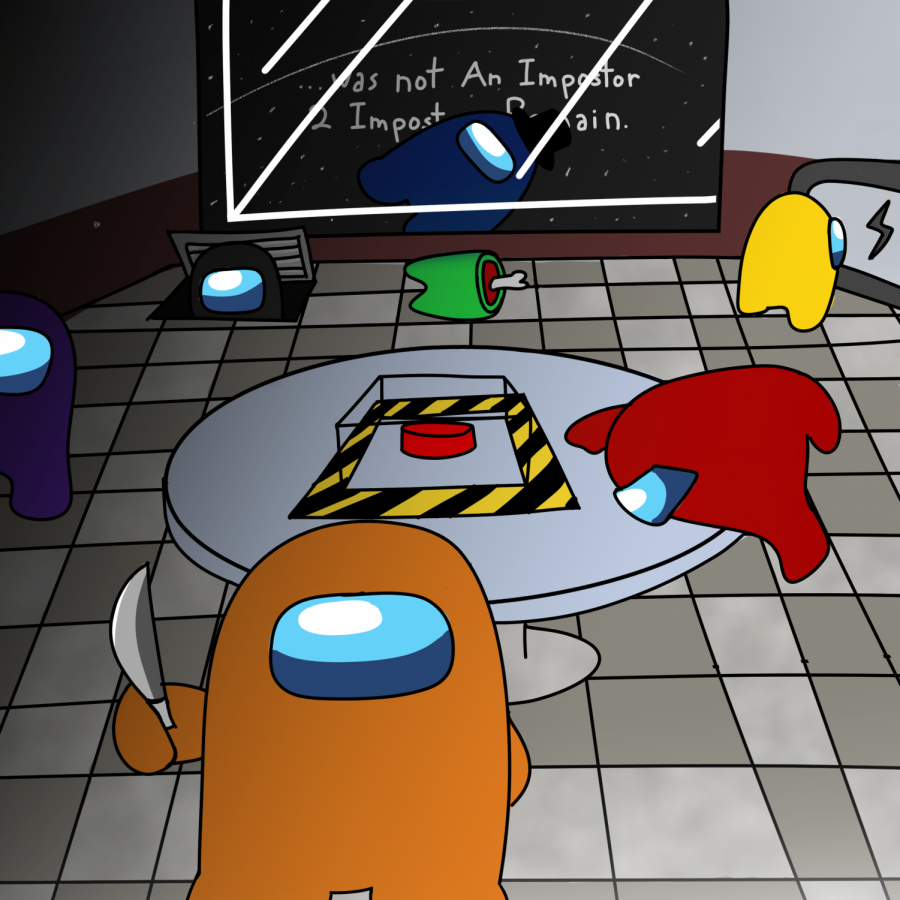 The newest hit game, Among Us, has formed many friendships and broken several more. Jelly beans run around, do tasks, and avoid getting killed as they vote players off the ship.

If there’s one phrase every student recognizes right now, it’s this: red sus.

From game maker Innersloth, “Among Us” is shaping up to be one of 2020’s biggest phenomenona. Though the game was first released in 2018, it averaged only about three players per month. Now, there is an average of about 200,000 people playing the game at any one time, according to Steamcharts.com.

“Among Us” is essentially a video game version of mafia, with a few tweaks. Up to 10 players are put on a spaceship with tasks to complete, but there are one to three “imposters” who secretly invade the ship. These imposters need to sabotage tasks and kill everyone else without being discovered and ejected from the ship. The crewmates need to complete their tasks, plus discover and get rid of the imposters via tribal-council style meetings.

If it sounds slightly disturbing to be running around a ship either killing or being killed, that’s because it is. But it’s just so addictive.

I’m neglecting college applications just to have the opportunity to kill off my friends one by one as an imposter. I’m ignoring lectures in AP Lit because that admin card isn’t going to swipe itself. And I’m shamelessly interrogating poor little freshmen about their tasks over Zoom during class games.

Nobody really knows what makes this game so wonderful, but “Among Us” is like a dream for our generation. Each round is short enough to keep Gen Z entertained, since most of us have the attention span of a goldfish. On the other hand, the rounds are long enough to waste time and fill those precious minutes of Zoom class without being too conspicuous.

Not to mention, its interactive servers make “Among Us” the perfect game to connect people that are socially distanced during these unprecedented times.

For a year as horrible as 2020, “Among Us” seems to have been sent from above to keep Gen Z from losing our minds. Now, when I’m sick of hearing about yet another state going into lockdown, or listening to old men insult each other during political debates on national television, I simply join a server, don my purple and party hat combo, and task my troubles away.

Even the TikTok overlords have smiled upon “Among Us”, which is obviously the biggest indicator of success these days. Plenty of videos about “What your main color says about you” or videos imported from game-streaming sites, such as Twitch, flood our For You Pages. Countless creators are out there asking the deeper questions, such as: Which color is the most sus? What is up with all the Q’s in game codes? Why is cyan the dumbest player to exist literally ever?

The real test, I think, is going to be how “Among Us” stands the test of time. Mario Kart Mobile, hyped up endlessly last year, fizzled out in about three weeks. Then again, this year’s students find themselves with a lot more time on their hands, and something about killing pink in MedBay during a boring history lecture is just so much more satisfying than doing it on our own time.

“Among Us” has been going strong for a while now, having the largest download count on the Apple Store and Google Play for 2020’s third quarter. The game also chose a great season to pop up, inspiring Halloween costumes, game nights, and other amusements that should keep it relevant for quite some time.

As long as people are there to be made fun of for their hat of choice (cough, flamingo hat, cough) and come up with ridiculously witty player names, I expect “Among Us” to last at least as far as winter break. I definitely recommend getting the game if you haven’t already.

For those not yet in on the hype, here’s a crash course: don’t main as cyan or lime, be nice in the chat, and for goodness sake, don’t call an emergency meeting three seconds after the game starts.

The bottom line is, if you haven’t yet downloaded “Among Us,” do it. It’s not like you have anything better to do.