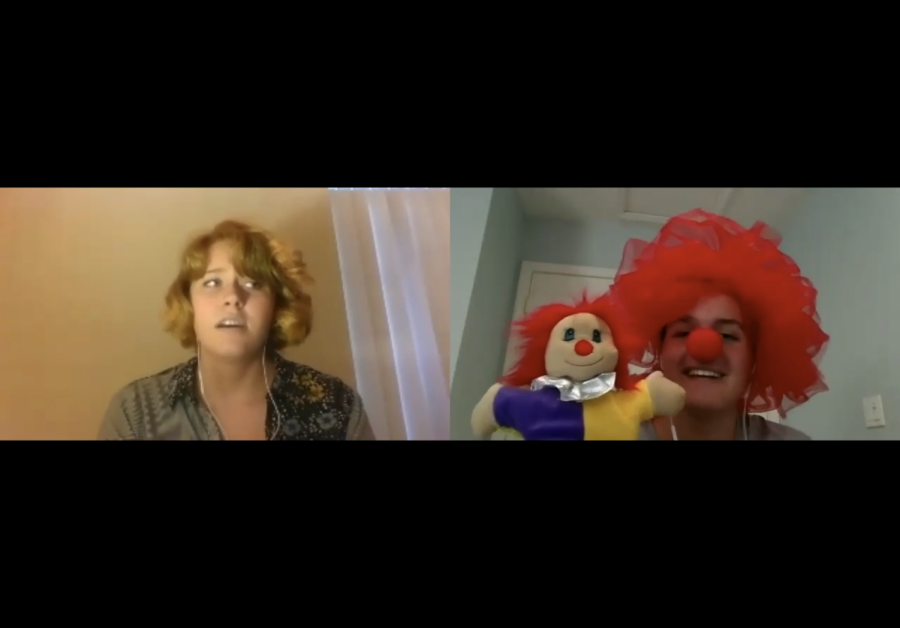 During Cal High's fall drama show, "Help Desk", Candence Spencer, left, has her call to the help desk answered by Devin Addiego. Unfortunately, Addiego's character, Boffo the clown, is of no help because Spencer's character is afraid of clowns. The virtual show was recorded beforehand and made available for viewing last Thursday and Friday.

COVID-19 has stolen the spotlight from the drama kids, but even a global pandemic can’t stop Cal High’s drama department.

As they say, the show must go on.

The drama program’s Theater 3 and 4 classes brought a whimsical and quirky fall show straight to students on their own devices that they can watch from the comfort of their own home last Thursday and Friday. “Help Desk” written by Don Zolidis is a play that was made specifically for this type of occasion and was perfect for Zoom.

This show is the first of four the drama program will be producing this school year. Because of the coronavirus pandemic, all shows will be released digitally. For their virtual show, the Theater 3 and 4 students did an amazing job.

Unlike the previous drama shows, “Help Desk” was not live. Instead, it was pre recorded on Zoom and was uploaded on Vimeo. In order to get access, students bought a ticket and a link with a password was sent directly to them. A hidden bonus in this approach was that students could watch it on their own time, like during lunch or sixth period.

Directed by drama teacher Laura Woods, the play consisted of several vignettes, depicting humorous interactions between people who are in need of help and those who are working at the help desk.  A majority of the scenes had two people in it, but some did add a third. Following social distance protocol, each actor performed their own part from home, which accounted for the simple backgrounds and props.

Each vignette was brought alive with the actor’s performances. A personal favorite was the first one featuring two characters named Angel (played by Elena Town) and Jeralyn (Maya Chakravarthi). Jeralyn is a very aggressive character, and Chakravarthi played the part extremely well. She seemed to be simply having a swell time messing around with Town’s character. Poor, timid Angel just needed help logging in, but in the end she just had a whole existential crisis about whether she was a robot or not.

Each scene was really quirky which created quite a few laughs. Another favorite was the scene featuring Vinny (Maddy Reedy) and Watkins (Isabella Lau) scene. Always read the fine print when you agree to the terms and conditions because sometimes you get what you least expected.

Watkins learned that the hard way when the vase she ordered came in shards after the delivery man chucked it out of a moving vehicle. But Watkins can’t do anything about the broken glass vase because it was her fault for not having a bouncy castle in the front lawn.

While I do miss the feeling of watching the performance live with dozens of other students around me, the excellent show really took my mind off of our current and chaotic reality. Students in Woods’ drama program did a great job working with what they had, and it showed in “Help Desk”.