Online schooling has brought out a whole different side of us

Unfortunately, the side shouldn't always be shown on Zoom and Google Meets 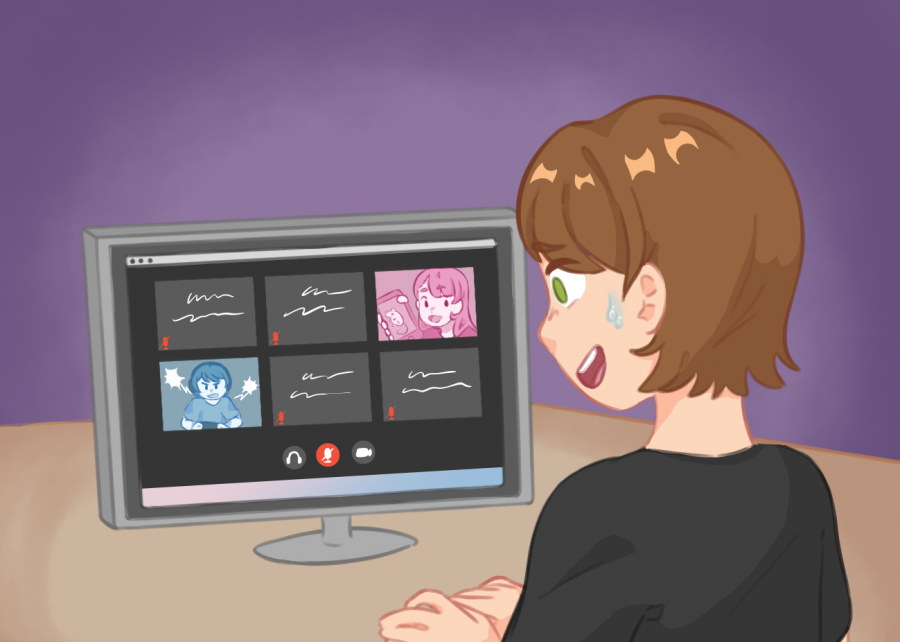 Adapting to remote learning has been a challenge for all of us, but some people have chosen to cope in unique ways...

Google Meet and Zoom recently faced some new security features from the district to keep unwarranted that happened earlier in the year out of classes.

Those changes may be working, but they’re not keeping all of the funny antics out of class because many of those moments are coming from the students, and even teachers, who actually belong in these meetings.

Some students and teachers have been caught by surprise on their webcams by some of the simplest things they forget – such as putting on pants.

English teacher Danielle Caddy said one of her students made a simple error of forgetting to put on pants for class only to realize that his reflection could clearly be seen in the mirror behind him.

“Can’t call the kid out, but you could see in the reflection of the mirror the kid didn’t have pants on, but rather was just wearing a pair of boxers,” Caddy said.

Caddy said she could tell the student was quite embarrassed by simply forgetting to put on a pair of pants before their English class had started. Can happen to any of us, right?

Algebra 2 teacher Anthony Khoo had quite the story too that ended with a student proclaiming “Look at what the cat dragged in!”

“I had a student share a HD photo [from her phone] of a mouse that her cat dragged into her house in the middle of the night,” Khoo said. “She named the mouse Harold and let it go in the morning so her cat wouldn’t eat it.”

At times, allergies can be the cause of a class disruption, with students or teachers having a sneezing fit in class. That has been going on for quite some time with English teacher Regina Lyon. She believes that the smoke alongside her yearly allergies have been the cause of her sneezing fits.

But Lyon said her  students are too polite to speak up about it, even if the sneezing is happening at a constant speed of a hundred miles per hour.

“I don’t have to pause, but they are way too polite and say ‘bless you’ every time,” Lyon said. “But they’re also laughing because it’s ridiculous.”

Other classes have found themselves in situations where it’s too awkward to speak up because, you know, everyone kinda stares at you. But teachers sometimes forget to turn on their lessons and students sit back and watch, trying to hold back from laughing or talking about the teacher.

Junior Eunice Oh found it funny that on Sept. 9 her AP Biology teacher, Andrew White, was actually teaching himself his own lesson while not knowing that his students were watching him. A lot of students were trying to hold back their laughter as this took place for a good part of the beginning of class.

“White has a bad internet connection, but his internet died and he got kicked off the call not realizing he was disconnected,” Oh said. “He was lecturing to himself and came back to realize that had happened.”

Oh went on to say that this incident had happened to other classes as well.

White essentially pranked himself on Zoom.

It seems that some teachers like the idea of having gaming setups so they can join their students after a day’s worth of work to play a game or two. Economics teacher Stephen Farwell has a game console set up nearby so when class is nearing the end, he’s able to boot up his games to join his students.

Senior Kenneth Vejby thought it was pretty cool how Farwell managed to really spiffy up Google Meets with his gaming set.

But some of the funny Zoom stories have come from not what appeared on screen, but away from the screen. It seems that some teachers are willing to join in on a round or two of games with their students typically on Fridays or during the middle of the week on a Wednesday.

Senior Adain Harris spoke out about a funny Zoom meeting in a class where blue was suspicious instead of red for once.

“One of the kids in my class didn’t mute himself and he was playing ‘Among Us’ so he was yelling like, ‘Blue is sus! Blue is sus!’’Harris said. “It was funny.”

This is only the beginning of Zoom and Google Meet being the sus ones, so watch out.