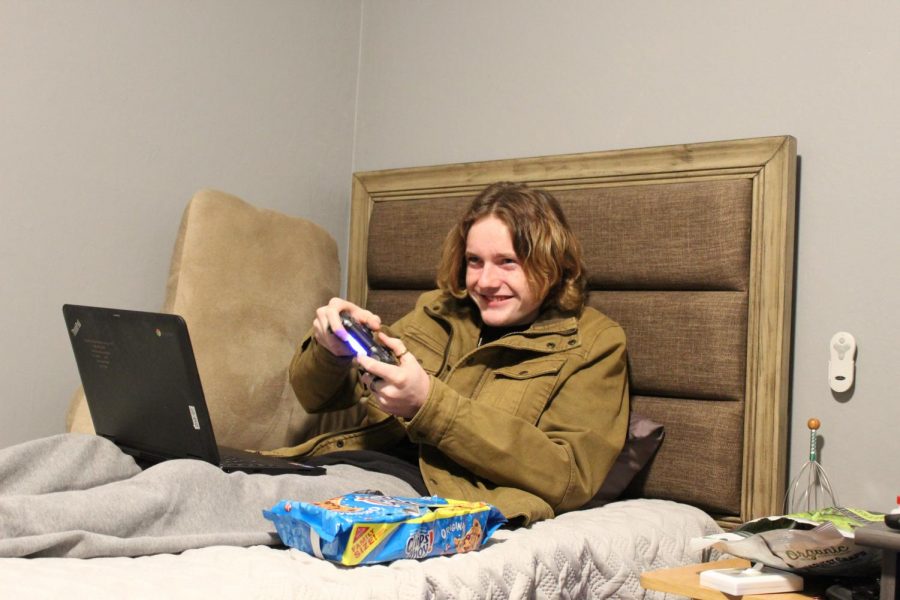 Many students are having trouble staying on task during virtual classes. Junior Carter Honsinger is doing everything but focusing on his school work during his virtual class.

As the end of the first semester draws near, many students are still keeping their mics muted and cameras off after 13 weeks of awkward silences during virtual classes and cringeworthy breakout rooms.

“In class, I’m scared to say the wrong answer and I’m scared people are judging me behind their screen,” sophomore Mahima Simha said. “I also don’t usually speak up in class, especially in Zoom calls because I’m shy.”

Like Simha, many other students are shy no matter the circumstance. But for others like sophomore Abby King, shyness isn’t the reason she doesn’t participate.

“I think it really depends on the class. I have Global Studies and it’s a safe and open space,” King said. “Then there’s math class, where everyone has their cameras off, and I’ll end up turning mine off also.”

By not turning on their cameras, students struggle to actively engage with their classmates and teachers.

But what do these students actually do behind their black, faceless screens?

“It’s really easy to look at texts and even do other things like homework because the teacher doesn’t know you’re not paying attention,” sophomore Olivia Suhy said. “It also makes you feel less engaged.”

Like Suhy, other students have discovered how easy it is to get distracted and not focus while their cameras are off.

“It’s so easy to just turn your camera off and leave the room,” senior Devyn Rivera said. “In some of my classes I could leave the room and no one would even know I left.”

Some teachers have put their foot down and started to grade differently because of this new freedom that allows students to actively not participate by turning off their cameras.

“Some of my teachers are grading based on questions they ask in class, and if we get it wrong we don’t get any points,” Suhy said. “I don’t think that’s very fair.”

Though teaching can be really difficult during remote learning, some teachers have found new and improved ways to teach.

“I always try to make my class fun,” Spanish teacher Scott Tinetti said. “I let students know that this is a safe space to explore their thoughts in Spanish.”

“It can be difficult trying to get students to participate,” Tinetti said. “I assign breakout rooms, usually four people to a room, and once I enter the room, there usually tends to be silence.”

To some teachers, breakout rooms are their main way for a class to get more comfortable with each other. But in most situations, students keep their cameras off, and sometimes don’t even speak during the breakout rooms.

Despite the struggle for students to participate and unmute, they still try to make the most out of remote learning.

“When I participate I gain a better understanding of the topics we are learning,” Rivera said. “Also, when I ask questions in class I can understand the subjects we are learning and get the practice that I need.”