Facts vs. myth of what happened during storming of the Capitol 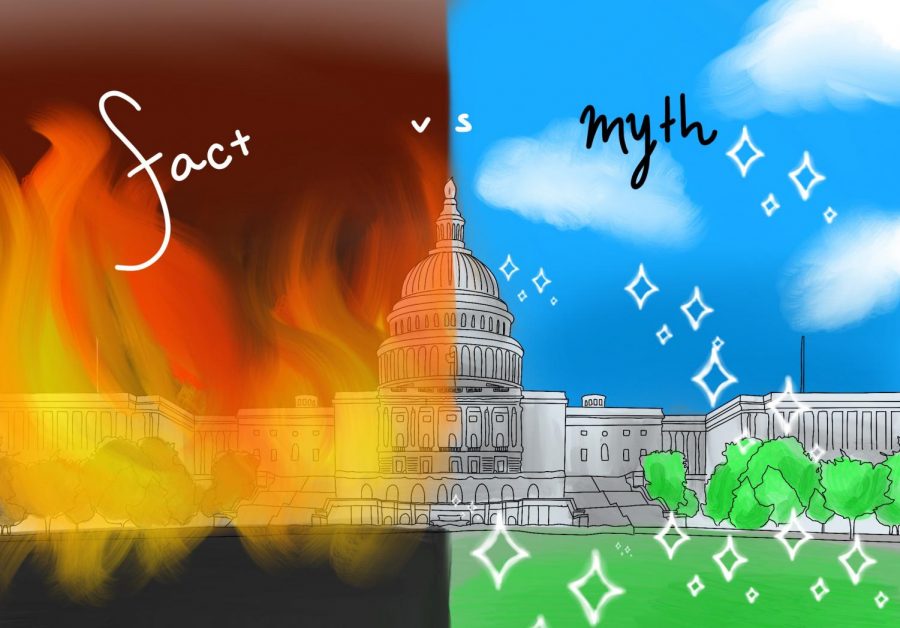 There were a lot of false narratives about the Jan. 6 Capitol riots, and events surrounding the incident.

The world was stunned on Jan. 6 as pro-Trump rioters stormed the U.S. Capitol Building in an act of violent insurrection.

What has followed since the event is the speedy unraveling of Trump’s support system and legacy, as countless White House officials and politicians stepped down from their positions less than two weeks before a change of administration. Nearly every government official has condemned the riot and Trump for encouraging the violent, hateful sentiments of the rioters.

In a tumultuous end to the presidential term, accusations and demands were flying regarding how to see Trump out of office. Many varying opinions and recounts of the events surrounding Jan.  6 have made it difficult to pick out the truth from the lies.

In an effort to limit the spread of misinformation, The Californian has put together a fact-checked explanation of some of the most recent claims being made including the basic facts on the 25th Amendment, vice presidential powers, and more.

One of the direct causes of the Capitol Hill riot was Trump supporters’ anger at Vice President Mike Pence, who they claimed had the constitutional ower to overturn the election. According to a tweet from Trump’s former account on Jan. 6, “Mike Pence didn’t have the courage to do what should have been done to protect our country and our Constitution”.

Title 3 of Article 1 of the Constitution outlines various responsibilities of the vice president during ballot counting. It states that “the President of the Senate [the Vice President] shall have power to preserve order; and no debate shall be allowed and no question shall be put by the presiding officer except to either House on a motion to withdraw.” However, this is not referring to overturning votes.It only cites keeping order on the Senate floor and directing motions of objection to Congress for debate.

When any objections to the ballots are called for after the counting, the vice president may open the floor for others to voice objections. However, those calls for overturning votes must “be signed by at least one Senator and one member of the House of Representatives before the same shall be received”, and are not subject to overturning by the vice president alone. Some of these written objections were made by lawmakers on Jan 6, but none of them were passed by both the House and Senate, so the certification in favor of Biden passed anyway.

Additionally, the Electoral Count Act of 1887 was created under similar circumstances, when the race between Samuel Tilden and Rutherford B. Hayes was met with states sending different sets of ballots. This act states the procedure for deciding contested elections: “If an objection meets these requirements… the two houses separate and debate the question in their respective chambers…The two houses then vote separately to accept or reject the objection. They then reassemble… and announce the results of their respective votes. An objection to a state’s electoral vote must be approved by both houses in order for any contested votes to be excluded.” The vice president plays no role whatsoever in throwing out electoral votes.

In summary, the vice presidential powers during an election involve presiding over the Senate and directing motions. They do not, however, grant him or her the power to overturn election results on a whim.

In the aftermath of the attacks on Jan. 6, there were many claims about what could have been done to get Trump out of office as quickly as possible. One of the more widespread calls was for Pence to invoke the 25th Amendment to remove Trump from the presidency.

Trump’s presidency, others called for his removal in order to prevent him being able to run for office again in 2024.

The 25th Amendment states that “Whenever the vice president and a majority of either the principal officers of the executive departments… transmit… their written declaration that the President is unable to discharge the powers and duties of his office, the vice president shall immediately assume the powers and duties of the office as Acting President.”

The amendment was presumably meant to be invoked in the case of physical inability on the part of the president, considering there is a clause where the president can request a return to his position. However, that request can be overridden by Congress with a supermajority vote.

In conclusion, the short answer is yes, Pence definitely could have removed Trump with the support of a majority of cabinet members. Even if Trump had appealed the decision, the desired repercussions would have been established preventing him from office.

Most of the violence at the Capitol was actually Antifa- Myth

In the confusion after the riots, many people began speculating that Antifa, a controversial leftist group, was responsible for much of the violence at the capitol. Most notably, a man dressed in a viking costume gathered attention for supposedly showing up to Black Live Matter protests as a member of Antifa.

The man, identified as Jake Angeli, is a known supporter of the far-right extremist group Q-Anon. When interviewed by BBC reporter Sophie Long, he stated that there were “no members of Antifa or any other left-wing organizations present in or around the Capitol building on [Jan. 6].”

What we did see, however, was countless racist, anti-semitic, and other extremist displays of propaganda represented in the Confederate flags, “Camp Auschwitz” hoodies, and other alt-right symbols shamelessly paraded around the Capitol building. Even if Antifa was among the crowd, which it decidedly wasn’t, there were more than enough violent and hateful displays that could be traced back to pro-Trump rioters.

The first thing that should be mentioned here is that whether it is politically correct to compare the Black Lives Matter movement to the Trump riots is disputed because of the nature of each of these protests. BLM was advocating against police brutality toward minorities, whereas the Trump riots were sparked on debunked claims of a stolen election.

That being said, there are large disparities in the way each of these acts of protest has been treated. According to the Department of Justice, 232  people at the Trump riots had been charged as of Feb. 4  for crimes committed at the Capitol. According to Forbes, on June 1, 2020 during a BLM protest alone, “more than five times the number of people were arrested than on the day the Capitol was stormed, with 289 people booked.”

In addition to Trump’s refusal to bring in the National Guard to stop the riots, his tweeted threats to BLM protestors of facing “MINIMUM ten years in prison” for destroying federal buildings, as well as “when the looting starts, the shooting starts”, were not repeated for the Capitol building rioters who committed those very crimes.

No matter the cause or explanation, there is undeniable evidence that the BLM movement and “Stop the Steal” riots have been met with completely different levels of force.

Many people in the aftermath of the riot have pointed the finger at Republican politicians, claiming that their refusal to accept Trump’s loss led directly to the mob at the Capitol building. Though many Republicans originally rebelled against the election results, there’s no evidence to really suggest that the party as a whole is responsible for the attacks.

Democrat Representative Mickie Sherill of New Jersey claimed in an interview with NBC that she saw “members of Congress who had groups coming through the Capitol” on Jan. 5. She claims that it was an act of “reconnaissance…for the next day”. Seeing as the Capitol is open for tours on typical days, there’s not enough evidence to suggest Republican lawmakers were helping out the rioters.

Since the attacks, many Republicans have denounced Trump, and many prominent figures such as Education Secretary Betsy DeVos even resigned from their positions. In a statement made to the Senate after the riot, Pence stated, “To those who wreaked havoc in our Capitol today, you did not win. Violence never wins. Freedom wins, and this is still the people’s house.” He then finished his statement by saying, “Let’s get back to work”.

It’s undoubtedly been a rocky election season for the Republican Party. They’ve mostly stood by Trump through all his claims about the election and Democratic lawmakers, and they’ve built their image for the last four years around the former president. These attacks, however, were encouraged and incited by Trump, and the role any other lawmakers played in the violence is disputable at best.

In a statement issued on Jan. 7, then-president Trump condemned the violence of the riot and declared that he “immediately deployed the National Guard”.

Typically, this would be true simply because of the fact that the President is the one in charge of calling in the National Guard in Washington, D.C.. But a minute-by-minute report of the security response to the riots from NPR reports that by 2:22 p.m., over an hour after the riot grew to an alarming scale, District of Columiba Mayor Bowser. was calling for the National Guard to be deployed.

Trump had no hand in ordering the National Guard to the Capitol, despite former White House press secretary Kaley McEnnay’s attempt to credit him with the order. Plus, even if he was the one to call in the National Guard, the action wasn’t recorded until hours after the violence began.

Among other rights, the 1st Amendment to the Constitution guarantees freedom of speech and freedom of expression. Those basic rights, however controversially exercised, have protected American citizens since the founding of the country.

But in the 1919 Supreme Court case Schenk vs. the United States, the Supreme Court introduced the “clear and present danger” argument. If the government deems the words or actions of a citizen pose a clear and present danger to the security of the country, they can be convicted for the offense. In other words, though the Constitution lets you express yourself, you can’t yell “fire” in a crowded room or “bomb” on an airplane.

On the flip side of this argument, though, is the involvement of social media companies like Twitter. Of course, Twitter isn’t the government, so according to some, they shouldn’t be allowed to decide what is or isn’t a threat to security. Section 230 of the U.S. Code 47, involving Internet protocol in an online environment, states that “No provider or user of an interactive computer service shall be held liable on account of— any action was voluntarily taken in good faith to restrict access to or availability of material that the provider or user considers being obscene, lewd, lascivious, filthy, excessively violent, harassing, or otherwise objectionable”.

Though this act has generated controversy and calls for being eliminated, they give companies the power to monitor their online content. However, they do not declare exactly what type of content counts as grounds for removal. Thus, whether or not these lawful loopholes outweigh the First Amendment itself is still highly disputed.