A journal entry from long ago 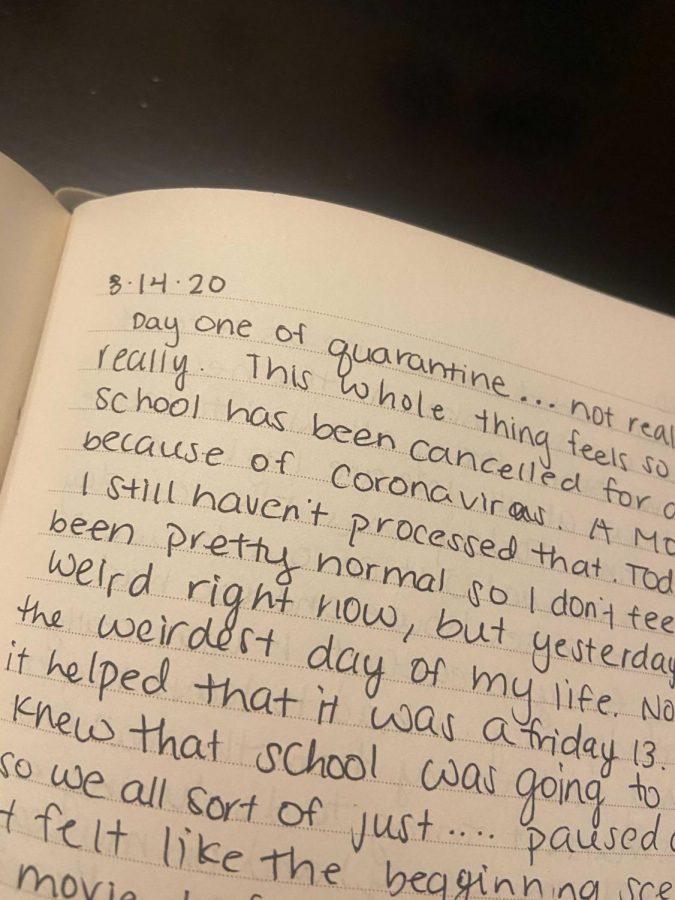 Managing editor Sabrina Contreras documented what she was feeling last year when in-person school was cancelled for initially a few weeks. A year later, students still are not back on campus.

A year ago, Cal High students were celebrating an extended spring break.

Three weeks off was what everyone thought they needed. Flash forward a year, and we grudgingly open our laptops every morning to log onto Zoom classes.

Not the ideal three week vacation many thought we were getting.

Looking back at old journal entries, I was able to see what I was thinking during that crazy time with the knowledge I have of how things turned out.

3/14/20 – Day one of quarantine… not really but really. This whole thing feels so surreal. School has been canceled for a month because of coronavirus. A MONTH! I still haven’t processed that.

Today has been pretty normal, so I don’t feel very weird right now, but yesterday was the weirdest day of my life. It didn’t help that it was a Friday the 13th. Everyone knew school was going to be canceled so we all sort of just… paused our brains. It felt like the opening scene in a movie before everything goes to sh*t. I truly don’t know how to feel.

They say it only affects elderly people and people with bad health, and they also say the number of cases is low here BUT NO ONE CAN GET TESTED!!!! I was sick these past couple of days- worst timing ever- and even if I wanted to get tested, I couldn’t. I am missing a whole month of track now and I missed our last meet because of my cold. So long story short, this whole thing sucks. I don’t know whether to be scared or not, but as of right now, I feel very weird.

3/17/20 – This isn’t real. I never thought I would be going through a crisis like this. The governor just said that the school will probably be closed for the rest of the academic year. My education is being taken away from me. I always took it for granted and now it’s gone. Just like that.

I have a very bad feeling about this. I feel like it isn’t going to end anytime soon, that quarantine will become our lives until it becomes ineffective. What if the virus mutates by fall and starts killing EVERYONE like the Spanish flu? I hate being pessimistic, but I can’t bring myself to have hope at this moment.

It’s hard to see past this. I know I should, there is a big picture to all of this but the small picture is what I am concerned with. I just never thought my education would be a small picture.

4/10/20- Yesterday was a good day. We got out and went hiking which was really fun. We may have gotten lost but it was definitely worth it. Getting lost was an adventure I didn’t think I was going to target during this quarantine.

This journal has become a primary source. I’m living a history lesson right now. Mr. Hodges could do cultural literacy about the different ways people kept bust during these times. It’s still surreal. I should be at school right now, but instead I’m at home writing this journal entry.

It’s so crazy and I’m starting to get really lonely. I miss my friends a lot. I wish I could be with them right now. I’ll have to group Facetime them later for sure. We are watching “Tiger King” together on Netflix party and it’s super crazy and insane. I’m glad I’m able to watch it with Rose and Diana, so at least we have that. I miss [pole vaulting too much. It’s not fair that I had to stop, this was going to be my season. I’m beyond upset about that but I’m trying not to fixate on it.

5/4/20- Wow, I can’t believe it’s already May. I think they might be lifting some restrictions, or at least talking about it. I know the stay at home order is extended to the end of this month, but I’m finally starting to have hope that the order will be lifted for my birthday. That would be the best birthday gift if it’s the case.

I  hope I can go to the beach. Going to the beach sounds amazing right now, It also sounds sadly impossible. All my AP tests are NEXT week and I have completely lost all my motivation. What am I going to do? Why did I have to lose all of my motivation? I  was doing so well the first semester. I mean right now I’m on a Zoom call but it’s like background music for me. I can’t focus on it at all. I’m really screwed for these tests aren’t I?

Present-day – Wow, almost a full year has passed since I wrote these journal entries and we are still stuck at home, I guess I was right to have a “very bad feeling” about the pandemic.

I think it’s safe to say that this past year has been the longest and shortest year of my life. I remember the days I wrote these first journal entries as if they were yesterday, and yet it feels like a lifetime ago.

Now going back to in-person school seems surreal. Seeing my classmates in the hallways instead of through the computer screen doesn’t seem possible.

At least some of my worries didn’t come true, like the virus mutating itself and killing everyone by fall. My education has continued as well. I was being a bit dramatic when I wrote that, I will have to admit.

I never would have guessed I’d be learning from a computer screen a year later from the warmth of my bed every single day though. To think there was a time I’d set an alarm at 6:30, wake up, get ready, and get to school by 7:25 because I never wanted to be late to my A period.

Now it’s a rare thing that I get out of bed before first period, let alone actually change out of my pajamas.

Getting tested thankfully isn’t a problem anymore, but everyone is anxiously waiting to finally get the vaccine. So there has been an improvement in that area.

I try not to go into the wormhole of “What if corona didn’t happen” but it’s a hard thing to avoid.

My track season was off to a great start, I had already broken the school record in pole vaulting twice and I was improving every day in practice. Little did I know that I’d be out for six months (again since I broke my foot freshman year). That was not great for my track career.

I made sure to continue training during quarantine, but it definitely wasn’t the same as being able to vault at the track. I originally wanted to be recruited by a college, but now I’m hoping I’ll be able to walk-on to the team of the school I end up going to.

As a freshman, I remember looking up at the seniors and not being able to imagine myself as one. It seemed like such an insane idea that one day I’d be a senior, the oldest on the campus, wearing tie-dye on the first day to show our senior status.

Turns out that was an insane idea because it never happened. While we became seniors, it didn’t really feel like much of a change. Everyone was confined to the four walls of their room. We don’t get the senior section of the bleachers for football games, or the feeling of – let’s be honest – superiority while walking on campus.

Even with hybrid school on the brink of starting, it won’t be the same as it would’ve been if we got a normal year. That being said, I’ve made the most of this year despite the setbacks.

The first months of quarantine were a very needed mental break for me, and I honestly enjoyed it. Once restrictions were lifted, I was able to see my two close friends which made things even more bearable and once school started, we had a little plan of doing school together whenever it was possible.

The few senior events that we were able to have, the senior sunrise, a drive-in movie, and many free treats from different restaurants, have also brought some positive experiences and memories for us seniors.

Senior sunrise was really the one thing that made being a senior feel more real. It was a good start to this unusual last year of high school.

So with all things considered, I think I’ve been able to make the most of this year and I would rather not dwell on the “what-if’s” of this whole pandemic.