Even in a pandemic, Assassins lives on 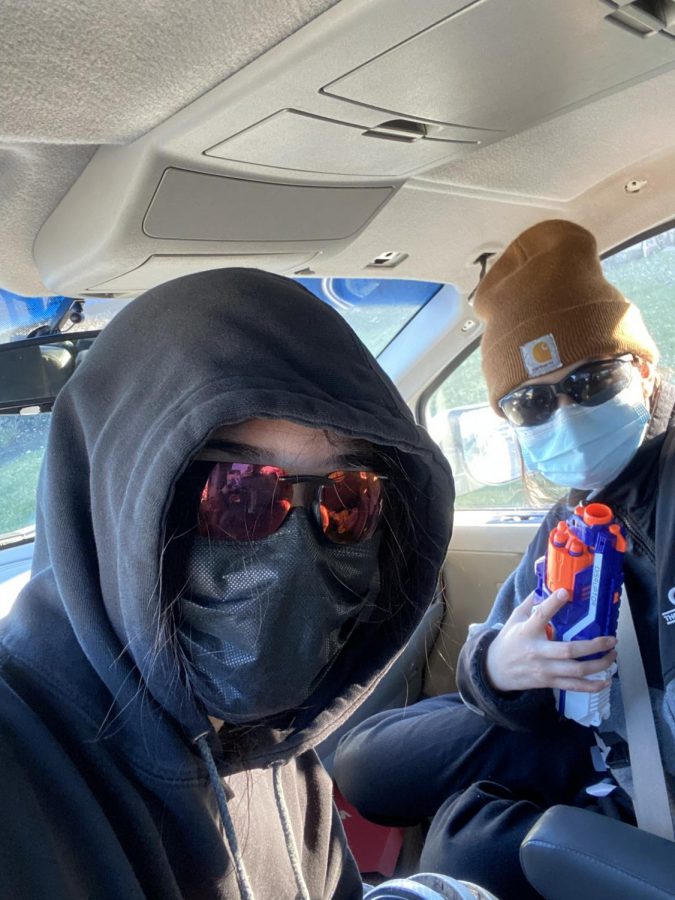 Even while school is remote and people stay at home, participating seniors are still actively seeking out their targets.

During this nightmare of a past year, normalcy has been rewritten.

But as I sat in the back parking lot of our school at 5:30 p.m. on a Tuesday, watching my fellow classmates aggressively maneuver their vehicles in an attempt to box each other in, all for the shot at winning some large sum of money, I felt that normalcy in fact, remains constant in one area: Assassins.

Every year, the senior class partakes in Assassins, where pairs of students gun down their classmates with soft, Nerf bullets all for the chance to cash in. And predictably enough, a lot of crazy stuff goes down.

Follow me as I delve into this jungle of chaos and turbulence.

During the first round of the game, which started the week of Feb. 14, my partner and I witnessed many unfathomable instances of savagery and desperation. As we attempted to assassinate our own targets, we often found ourselves in the midst of other people making a run at their targets.

One particular scene at the popular restaurant Clementine’s along San Ramon Valley Boulevard near Bollinger Canyon resulted in the use of human shields, and an inexplicably long standoff that ended in a disqualification.

As the game progressed, students began to see their fellow classmates in a whole new light.

“I’ve learned that my classmates are extremely stubborn, and are extremely competitive,” remarked senior James Buchanan, who spent hours tracking down his first set of targets. “They also have a whole lot of patience to wait in long standoffs.”

Other students found themselves in car chases, speeding through the streets and freeways of San Ramon, while others found themselves being forced to wait out their merciless stalkers in the front seats of their own cars. Sophia Puentes was one of those people.

“I was stuck in my car, in front of my house, as a shootout was happening in front of my eyes, between my assassins and their assassins,” Puentes said. “I ended up running for my life, trying to escape into my house through a side gate.”

Come the final day of hunting in the first round on Feb. 20,  many duos began to fret at the prospect of not being able to eliminate their targets. Remember, failure to do so results in instant elimination. And so, the buyouts began. Like the NBA in February, partnerships were bought out as one agreed to be paid to get shot so their assassins could move forward. Choosing to profit a net gain of anywhere between $10 and $20 in exchange for their place in the competition seemed like the best move for some teams.

There were also duels in which teams who could not get to their targets during the week of hunting were allowed to challenge their targets to duel, Alexander Hamilton style. Sounds epic in theory, but it was anticlimactic in reality, as the duels consisted of high schoolers running around a small grove of trees trying to shoot one another.

On to the next round.

As time drudged on, the hype began to die down. Going out to find your targets began to feel like a chore, rather than an opportunity to roleplay as 007.

The process of doing recon to identify your target’s work schedule was no longer mystifying, but rather a grueling process that involved social contact, and actual dedication to your craft. The burnout was real. “I think the dynamic of the game changed a lot for my partner and I. the fun never wore off but we definitely became more careless which got us out of the second round.” said Bella Simi, who was eliminated at the start of the second round. A testament to the biblical levels of burnout seen by assassins.

Even I got sloppy, making the careless mistake of sitting outside my target’s house without a face covering, because I believed that he was out and about, rather than sitting in his room and watching me like a hawk.

Soon, I myself was eliminated, as the number of assassins quickly began to dwindle, the game began to get more intense, with fewer and fewer players by the day. And that is where we are today.

Like a train barreling toward the end of the track with no signs of stopping, Assassins continues, with a gruesome, gristly end that will soon come into sight.