SSGs bring students back together on campus 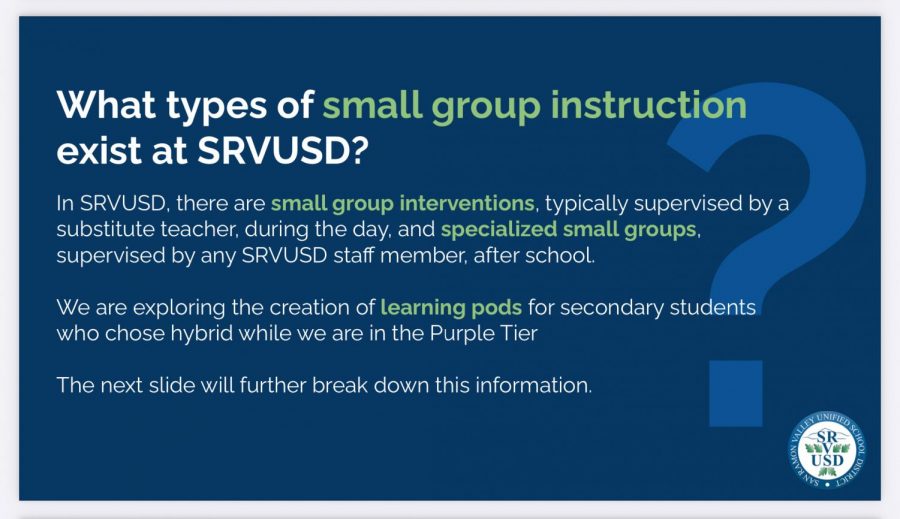 Small Specialized Groups (SSGs) have allowed students to return to campus for academic and extracurricular activities since early February.

After almost a year of remote learning, students had a chance to return to campus in February, albeit in a somewhat limited fashion.

Beginning Feb. 8, Cal High offered students the opportunity to participate in Small Specialized Groups (SSGs) that are intended to give students access to resources and experiences denied to them by the pandemic. SSGs included everything from academic help to extracurricular activities such as a movie night.

“I think [SSGs are] a good chance just to come on campus and have some of that social interaction with their peers,” said Cal’s computer science teacher Sean Raser, who hosted his own “Makerspace” themed SSG.

SSGs were initially planned to be introduced alongside a hybrid learning model, which the district originally hoped to start when the second semester began in January. The intent was to provide students who chose to remain remote the opportunity to come back to the campus and participate in certain activities.

While the San Ramon Valley Unified School District postponed the transition to hybrid learning as Contra Costa County remained in the purple tier, the SSGs were implemented. The district is scheduled to start hybrid learning for high school and middle school students on March 17.

The SSGs are led by teachers and staff who choose what type of group they would like to host. The focus of each SSG is decided entirely by whomever is hosting it. Administrators hope that eventually a wide variety of SSGs will be available to cater to as many students as possible.

“The possibilities are kind of endless, so we want to build stuff that students would actually want to participate in,” assistant principal Tucker Farrar said.

Administrators sent a survey to the students in order to help determine what activities students were interested in.

As of late February, there were seven teachers and staff who volunteered to host their own SSGs. Some of the SSGs thus far have been for special education classes, while another took the form of a movie night.

“We hope to keep expanding [the offered SSGs],” said counselor Rebecca Bellini, who has been organizing Cal’s program. “It just really relies on teachers being willing and available to run the groups after school.”

The method of signing up varies for each SSG. Some are available to anyone who signs up, such as the group that met on Feb. 10 to watch a movie in the theater. Other SSGs may be available only to certain students, such as members of particular clubs or classes.

SSGs consist of no more than 14 students, who meet one or more times a week after school to take part in whatever activities they signed up for. Families are assured that in these groups, Contra Costa County health guidelines will be followed in order to ensure the safety of all involved.

Mask wearing and social distancing are strictly enforced, and equipment that is to be shared among students is sanitized between sessions. Participating students are also expected to self assess for symptoms of COVID-19 before meeting with the group.

In order to maintain the safety precautions required, the district only allows students to be members of one SSG at a time. This means that students have to decide which groups they want to actively participate in.

Thus far, turnouts for these SSGs have varied, and few have been completely filled by students. “I believe that this is a great opportunity for seniors and other grades,” said senior Mia Marcozzi, who attended the movie night SSG.