A short timeline of the Taliban takeover 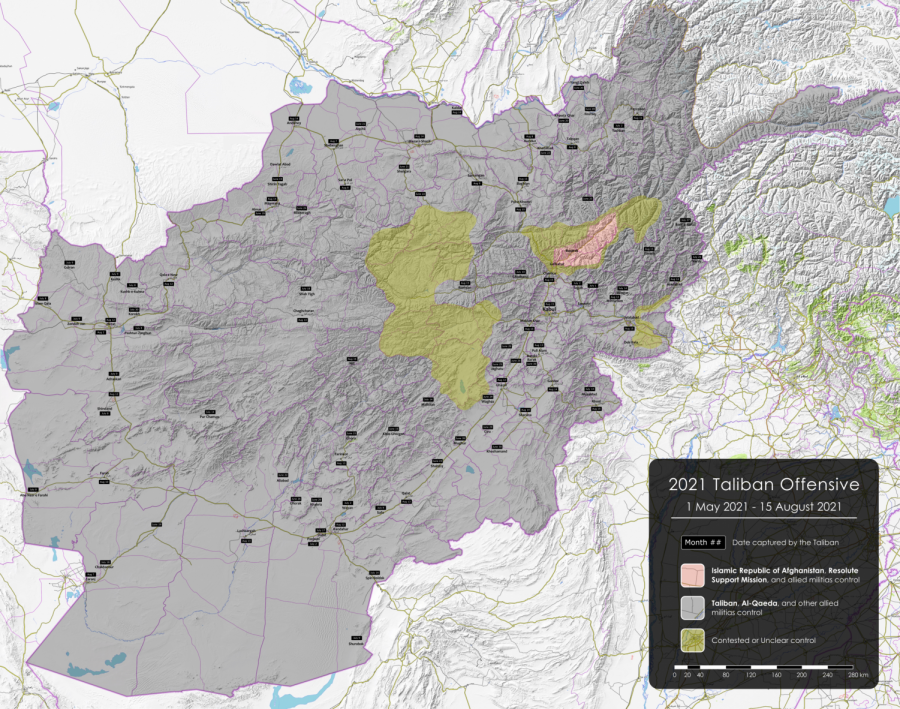 This map of Afghanistan shows what the country looked like on Aug. 15 when Kabul fell to the Taliban.

After almost 20 years of war, American troops retreated from Afghanistan  in August, leaving the country under the control of the Taliban.

The Taliban’s takeover, 20 years after they lost control of Afghanistan’s government in 2001, has impacted the Afghan community in the Bay Area, one of the largest in the country.

“When I was in elementary school and middle school people didn’t know where Afghanistan was and now it’s like the center point of all this chaos,” said junior Ali Ahmad Taheri, whose family is from Afghanistan.

The United States’ involvement in Afghanistan started with the Soviet-Afghan War from 1979-1989, when the U.S. funded various militia groups, called mujahideen, who fought against the Soviet invasion of the country.

“The United States made a series of very short term decisions,” World History teacher Tyler Gulyas said. “Everyone in the United States saw it [as we’re here to fight the Soviets.]”

The conflict resulted in an estimated five million refugees fleeing Afghanistan to other countries.

“[The Soviet-Afghan War] is the reason that my parents moved out [of Afghanistan],” Taheri said.

One of the militia leaders in Afghanistan fighting the Soviets was Osama bin Laden. Originally a group that aided fighters against the Soviets, Bin Laden’s  Al-Qaeda launched several international terrorist attacks after the conclusion of the Soviet-Afghan War.

These attacks included the 1993 bombing of the World Trade Center, the 1998 attacks on U.S. embassies in Kenya and Tanzania, the 2000 attack on an American warship harbored in Yemen, and the attacks on  Sept. 11, 2001.

President George W. Bush signed into law a joint resolution on Sept. 18, 2001 authorizing military action against those responsible for the 9/11 attacks. That October, the U.S. began a bombing campaign against the Taliban.

Fast forward 19 years, and in February 2020, Secretary of State  Mike Pompeo and Taliban leader Mullah Abdul Ghani Baradar signed a deal in which the U.S. agreed to withdraw troops from Afghanistan within 14 months. In return, the  Taliban promised to begin negotiations with the Afghan government, sever ties with al-Qaeda, and not harbor terrorists.

“I feel like the Taliban missing 5,000 people would have definitely helped [limit their rise],” Taheri said. “I genuinely hate speaking the same language as these people.”

When the U.S. began withdrawing troops in August, Taliban forces overthrew the Afghan government and captured Kabul on Aug. 15.

On Aug. 21, two suicide bombers from ISIS-K, which is ISIS’ Afghanistan branch and an enemy to both the Taliban and the U.S., killed 13 U.S. service members and at least 60 Afghans.

Thousands have tried to flee Afghanistan and escape the persecution of the Taliban.

“I’ve seen videos of Taliban being in people’s houses and messing around,” Taheri said. “They have no idea what kind of power they have.”

Local organizations have helped Afghan refugees relocate to the Bay Area, such as Jewish Family and Community Services East Bay, which resettled 80 refugees in August and at least 28 in September.