Back to school backfires 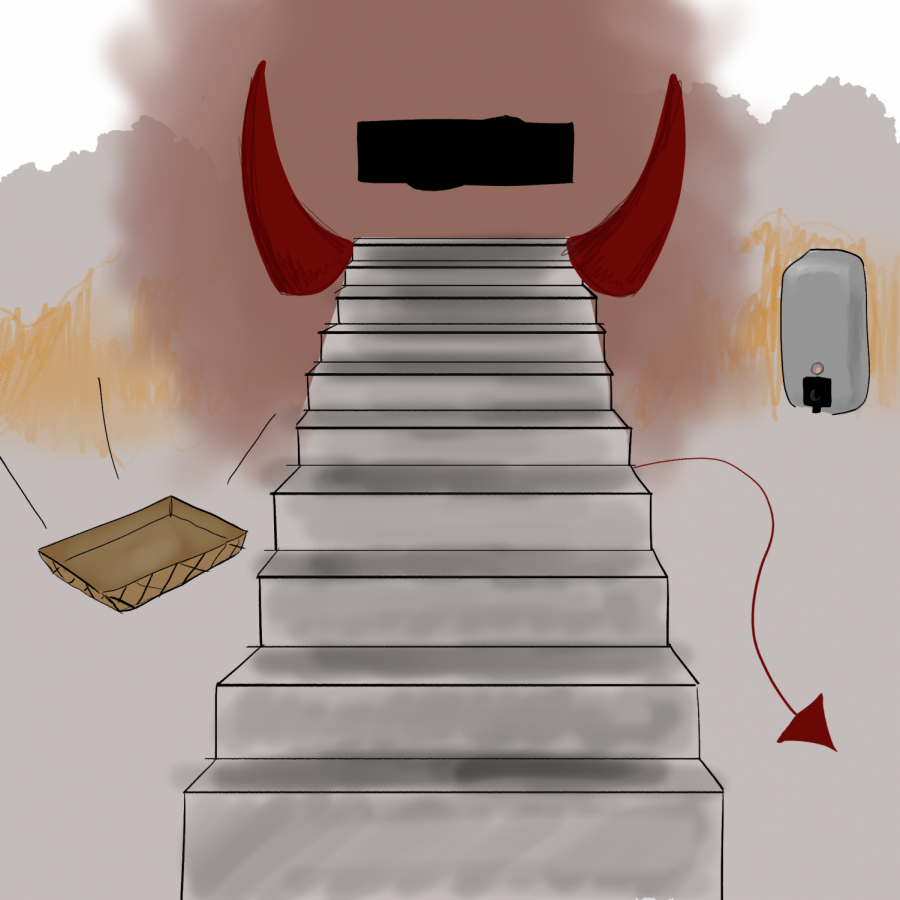 The demon stairs of the main building sadly did not disappear during quarantine.

There is one truth at this school: there’s always something going on at Cal High.

It doesn’t matter if we are online or in person. It’s always something.

Honestly, I definitely could have guessed that something wacky was going to happen based on Cal’s track record, but some part of me hoped that this would be a fairly normal first few months.

Boy, was I wrong.

I suppose we should start at the one thing all Califonians know and love. No, not the high rent prices. The smoke.

We seem to have normalized the fact that nearly every year the sky turns orange because of wildfire smoke blowing into the Bay Area.

When one of my classes took the mask break I usually look forward to, I was begging my teacher to let the class back inside in just a few seconds.

Even so, students now have the opportunity to get free lunches for the first time ever, but fewer students were able to do so as food stock ran out on the first day. While the food no longer costs money, you may still have to pay a lofty price. I’m no food critic, but I can personally attest that eating the cheeseburger made me feel an odd mix of fear and joy at the same time.

Lunches aren’t the only thing that students got for free. We received Chromebooks that come personalized with all kinds of defects. Now we can turn in our hard work on the most confusing app of all time, Schoology.

Speaking of the school providing supplies, I’m sure many students have caught a whiff of the weirdly thick hand sanitizer that resides in many classrooms. One drop of the stuff and suddenly my hands smell like a pub. There’s so much ethanol in those giant jugs that my Irish ancestors are weeping.

And is it just me, or was the car conga line going to and from school a few hundred cars shorter during my freshman year. A nice added bonus is that one car on Newport Avenue that just has to rev it’s engines every day like it’s a Formula 1 race car. You know who you are, pal.

As longtime readers might know, I have a very special relationship with the stairs in the main building. I thought I could escape them during quarantine, but alas, I am no longer in the safety of my own home.

The stairs seem remarkably cruel this month, especially because of the mask. I can breathe fine with it on, but every time I go to the third floor I get smacked in the face by my own cereal-scented breath.

And since I have two classes on the third floor every even day, I get to smell what I had for breakfast and dinner. Yum.

Many of you who similarly have to ascend the stairs on a regular basis might be familiar with the decidedly adult gratification object that had been residing rent free in our minds and on the second story since Aug. 27.

For those of you who are not aware of what I’m babbling about, unfortunately you will never find out. It’s too late to witness its glory because it’s finally, less than promptly, been removed.

There have always been some sort of shenanigans going on at Cal High, no matter the time of year, but these first months feel different. But even with conspicuous objects, demon stairs and monumental amounts of traffic, there’s still nowhere I’d rather be.