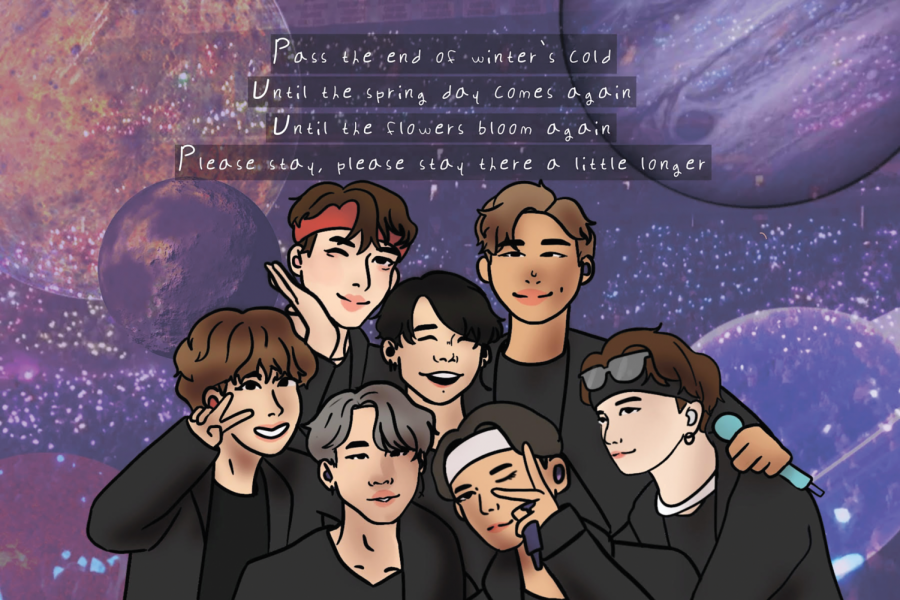 Members of BTS, who have a tradition of taking group photos at every concert, have not performed live since the COVID-19 pandemic hit in March 2020.

As performers of all kinds begin to start up tours and concerts again, all eyes are on the world’s biggest music group and the future of their tour.

In other words: What’s up with BTS?

Big Hit Music, the label BTS is under, announced on Aug. 19 the cancellation of the band’s “Map of the Soul: 7” tour.

The tour was supposed to kick off the US leg of the tour in April 2020 at the Seoul Olympic Stadium. Unfortunately, when COVID-19 hit the world with full force, the group was forced to postpone their tour for an indefinite time.

After more than a year of being in a postponement limbo, the tour’s cancellation was announced through a post on Weverse, a mobile platform for fans and artists.

“Due to changing circumstances beyond our control, it has become difficult to resume performances at the same scale and timeline as previously planned,” Big Hit Music representatives announced. “Therefore we must announce the cancellation of the BTS ‘MAP OF THE SOUL TOUR’.”

Although the tour was canceled, BTS recently announced four concert dates in Los Angeles at SoFi Stadium on Nov. 27-28 and Dec. 1-2.

“Map of the Soul” was one of the most anticipated tours of 2020, selling out 39 shows in 18 countries spanning North America, Europe and Asia. There were almost twice as many tickets sold for BTS’s tour as the Super Bowl in that respective year, according to StubHub, a ticket exchange site.

BTS was going to start the US leg of the tour on April 25, 2020 with a two-night run at Levi’s Stadium in Santa Clara.

“I applied for the ARMY membership but getting the tickets was still kind of difficult,” said sophomore Carolyn Xu, whose tickets for the Levi’s stadium show were canceled. “So many people were trying to get tickets.”

Conversations were sparked over whether the cancellation was even necessary, seeing as many other artists have started touring again. The Korea Disease Control and Prevention Agency announced on Sept. 9 the spike in COVID cases as the country enters its fourth wave of COVID.

“They did the right thing, especially in these times,” said sophomore Anushri Das, who was also planning on attending their Santa Clara show. “People can barely effectively enforce masks at school, so it would be impossible to enforce masks in a stadium full of people.”

Although fans who purchased tickets for any of the shows received full refunds, the news of the tour being canceled still upset those who planned on attending.

“Obviously it is very sad, but it was the right move,” junior Margaux Gutierrez said. “People were clinging onto hope that the tour would happen, so the tour being officially canceled gives the fans closure and lets them grieve.”

The members of BTS have been very vocal about their irritation with this situation. Through interviews and songs on their last studio album “BE’’, the members have expressed how much they miss performing and seeing their fans.

In an interview with Rolling Stone magazine, BTS vocalist Jungkook stated, “I’m a person that really loves to be on stage and really loved hearing from our fans, so when our tour got canceled in March last year, it was a bit of a shock, and it was kind of hard to take in.”

Throughout the pandemic, the music group has stayed connected with fans as they continue to perform via online concerts.

“The online shows are a great way to keep performing,” said junior Kayla Romans, another fan who had tickets to the tour. “It really is the next best thing to an actual concert.”

BTS hosted their first online concert, “Bang Bang Con: The Live”, in June 2020. Big Hit metrics indicated that the show peaked at 756,000 viewers in 107 countries and territories. Attendance was the equivalent of 15 shows at a 50,000 seat stadium. The concert had the biggest audience for a paid virtual concert.

“Muster Sowoozoo”, their most recent virtual concert, was a weekend-long event to celebrate the band’s eighth anniversary. They broke their world record, with 1.33 million viewers, earning $71 million in merchandise and ticket sales.

“From the clips I have seen, BTS do a great job with making you feel like you are there in person during the online shows,” freshman Daksha Chandragiri said. “It’s not surprising that so many people pay to watch even though it’s online.”