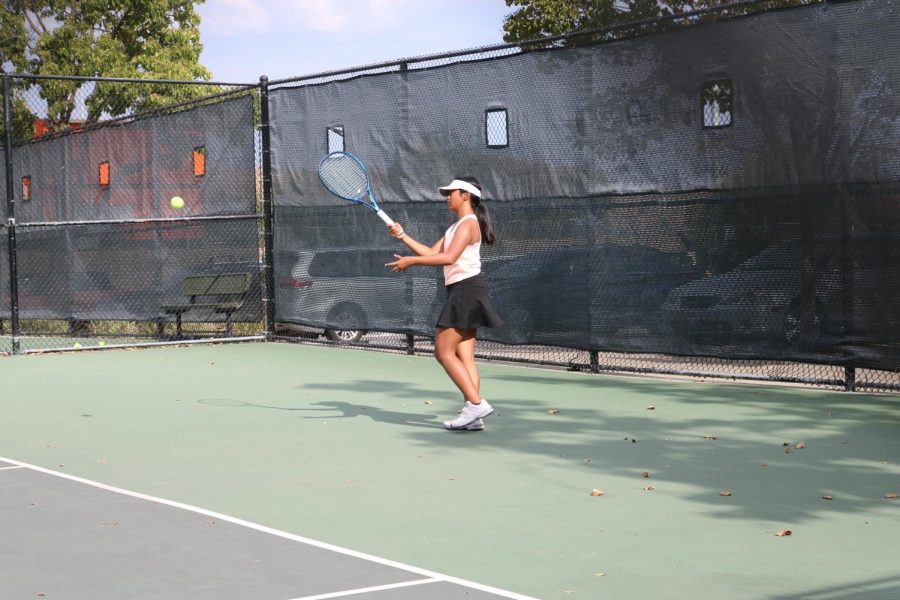 Freshman Gracie Barco returns a serve during a match against Dublin High.

It’s usually a senior or junior who is the top ranked player on the varsity tennis team.

Sometimes a sophomore will slip in there and claim the top spot. But a freshman?

That’s what Cal is experiencing with freshman Gracie Barco, who is the Grizzlies top ranked player.

“I’m proud because I’ve been training for a really long time so I feel like it paid off at least,” said Barco, who attended Pine Valley Middle School last year.

The Grizzlies are still growing this season while off to a 2-8 start. Barco has gone 3-6 in the nine matches she’s played, facing mostly upperclassmen playing in the top spot for their teams.

Before tennis, Barco tried her hand at other sports such as basketball, swimming and soccer. But tennis stuck with her in a way that the other sports didn’t.

She has been playing tennis since she was seven with her parents as her main motivation.

She doesn’t seem to see all of this practice as work though.

“Tennis is really relaxing to me,” Barco said. “All the time I’m stressed about schoolwork especially with COVID, and tennis has been an escape from that.”

Though COVID-19 has been an obstacle in her tennis career, Barco has persevered through the challenges it brought and emerged on top.

“Gracie is a fighter. She knows she doesn’t have the size or the speed but she makes it up by the technique and strategies,” varsity tennis coach Manuel Vasquez said. “Her strategies are usually what make her win,”

Barco’s teammates are fond of her as she’s a newcomer to the school and team. Instead of being jealous, they encourage her to play better, and admire her dedication to her craft.

“When I started I was in JV, and I think it’s really cool that she’s really dedicated to tennis,” teammate Stephanie Woon, a senior, said. “Some of us are not as motivated to play tennis as she is.”

Having great expectations placed on a young athlete can come with great pressure, and Barco definitely feels it.

“I do feel like there might be a little bit of pressure to keep the number one spot and the work expected of me,” Barco said, “but I’ve been training a lot so I think it’s going to be easier than I might think.”

“She has a lot of drive and spirit, and I see that she really puts in the work outside of practice as well,” Pandey said. “I know that a lot of us get busy and don’t really do that but I can see her putting in that extra step.”

Though Barco is the best on her team, she does sometimes take losses.

“I have a lot of tournament matches where I’m motivated and I’m ready to go but it just starts to slip as I keep playing.” Barco said.  “Nowadays when I play a match and I lose, I’ve been working on letting it go. I’ve been working on regulating my emotions so I can move past it,”

Barco has overcome many obstacles to make it to varsity. COVID, being an incoming freshman, and schoolwork piled on top of her hours of practice.

“I think my biggest achievement was getting up to the number one ranking,” Barco said. “It’s something that I can tell people and they can understand.”

And if she keeps working and progressing, who knows where tennis can take her.

“She’s only a freshman, and she’s already number one with this school right now,” Vasquez said. “If she keeps up where she’s going… she will definitely be a college player.”