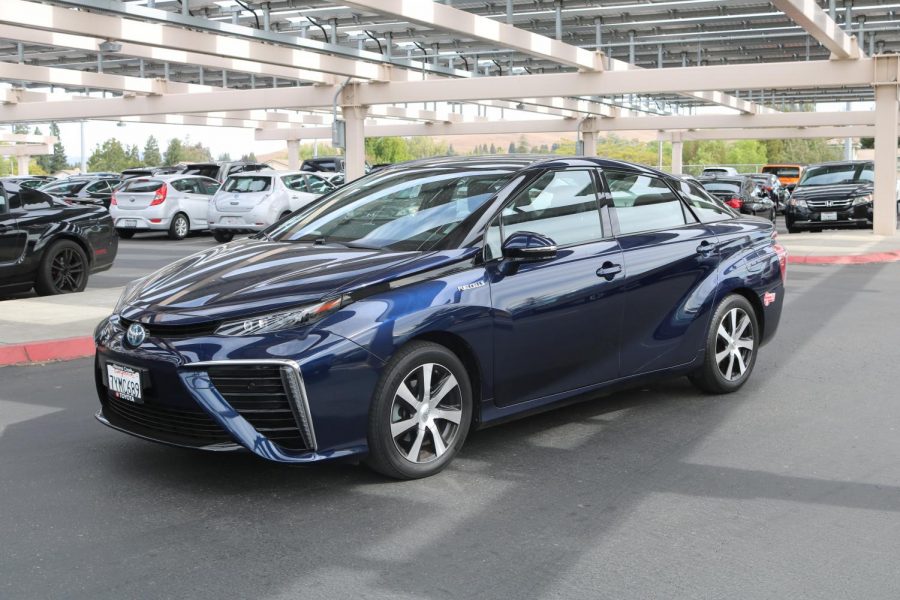 But senior Luca Alioto has taken his ride to the next level by owning the only hydrogen-powered car in Cal High’s parking lot.

Alioto owns a 2020 Toyota Mirai, one of the two hydrogen cars available on the public market. The other vehicle  being the Hyundai Nexo.

There are only about 6,500 hydrogen cars in the U.S., according to energy.gov.

“I got my car from my uncle last year when I had just learned to drive,” Alioto said. “It’s kind of weird driving it though.”

Alioto said that the driving is smooth, soft, and silent. The sounds and refueling are completely different from a gasoline car.

“The engine is silent when you start it and while you are riding it,” Alioto said. “It also [sounds] different refueling a hydrogen car than a regular gas car.”

When refueling a hydrogen vehicle, a nozzle is used just like at a regular gas station.

When refueling, there is a hissing sound, which is normal but makes the process sound risky and prone to an accident. The hissing from the nozzle pump is actually just for separating the oxygen from the hydrogen, like a vacuum.

It can be risky refueling with hydrogen, considering how dangerous hydrogen is without proper safety measures, such as secure nozzles and educated drivers.

Hydrogen is extremely flammable when in contact with oxygen present in the air, according to osha.gov. In the past, there have been many accounts of stations exploding when faulty nozzles didn’t properly separate hydrogen from oxygen, resulting in death of customers.

One example is in Santa Clara, where a hydrogen refueling tanker exploded, resulting in a shortage of hydrogen in the Bay Area for a month, according to Cnet.

It is also very expensive to fill up the car with hydrogen, with prices reaching $16 for a kilogram of hydrogen, Alioto said.

Hydrogen is expensive to harvest, according to a story in The New York Times. Harvesting hydrogen involves separating it from a substance, such as water or fossil fuels from a refinery. It is then transported to the station.

While burning hydrogen is emission-free, harvesting it creates greenhouse gases, causing more pollution than burning diesel, according to the Times story. It’s ironic, considering that hydrogen power was meant to decrease greenhouse gases, but is creating more at the same time.

Filling Alioto’s tank requires about 5 kilograms of hydrogen, which will take him about 200 miles. So, a full tank costs Alioto roughly $80.

Alioto’s car is a certified clean air vehicle, which is an added bonus to using hydrogen. Clean air vehicles have rebates ranging from $1,000 to $4,000 tax credit, special access to carpool lanes, and fuel savings for the state government of California, according to SF Environment.

Alioto said that there are only three hydrogen stations in the Bay Area, with the closest one in Bishop Ranch. The other two stations are in Hayward and San Leandro. The lines at these stations are really long, and one time he had to wait three hours to fill it up.

Alioto has had some interesting experiences with his car.

“One time, my car [ran out of fuel] while I was waiting in line, so I had to leave it there for the night,” Alioto said. “I had to go home and refuel it the next day.”