Musicians adapt to special face coverings so they can play indoors 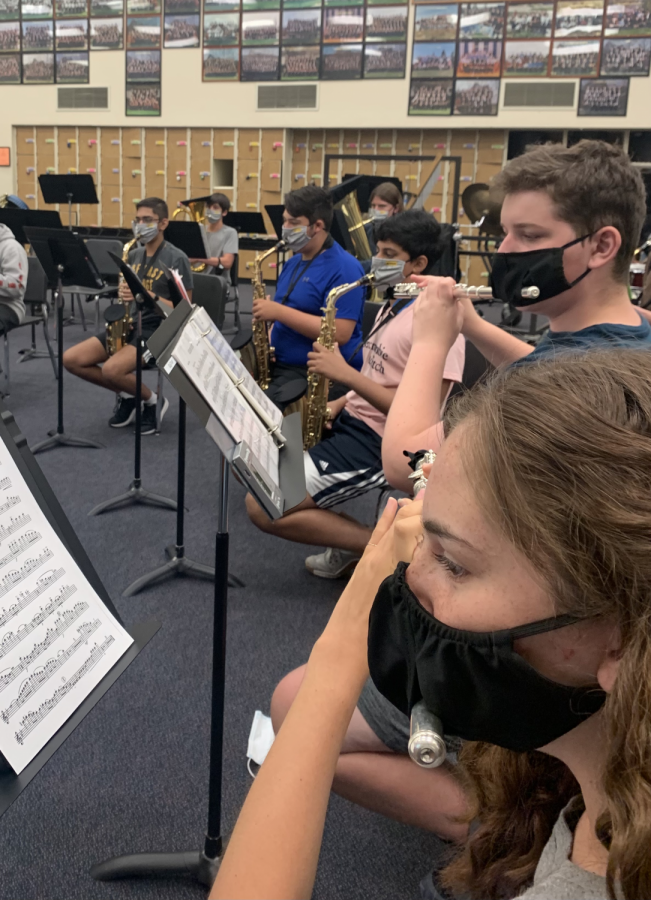 Members of the wind ensemble class play "Sleigh Ride" with their special masks, which include a slit for the instrument.

Ever worn a mask with a slit right in the middle of it?

As the Cal High instrumental music program brings in-person playing back to life, many band students can now answer “yes” to that question.

After a rough year online, music students and staff are adjusting to changes in the program to accommodate COVID-19 safety guidelines and protocols. New Personal Protective Equipment (PPE), such as the special masks, have taken some getting used to.

Every mask that band students use is produced by United Sound and looks like a regular black mask. But up close, a two-inch slit in the front where the mouthpiece of the instrument goes through is visible.

This slit, which operates as a flap, also properly covers the mouth when no instrument is inserted. There’s also a cloth cover called a bell cover that fits over the end of the instrument where sound comes out. Such PPE is used to stop the aerosol spray produced by musicians when they blow into their instrument from being released into the air.

Throughout multiple band classes, issues with being able to comfortably use the band masks have been common.

“In the beginning it was sort of awkward,” sophomore Alyssa Luu said. “Afterwards you get used to it.”

Masks for flautists are different from masks for the other musicians mostly because there are two slits for the flute to slide into. Like with the masks for other instruments, flautist masks have a bell cover, which is a piece of cloth strapped onto the end of the instrument using a rubber band.

The masks for flautists in marching band, which arrived before the ones for wind ensemble, were found to be extremely uncomfortable and tight.

Sophomore flautist Ishika Banerjee said the original marching band masks were so tight that they would cut into her neck and around her nose. To deal with this, many flautists in marching band got a regular mask and cut slits into it themselves, or tried to loosen their mask.

Since then, this problem has been alleviated because marching band regularly plays outside with social distancing.

On the other hand, flautists in wind ensemble must wear masks at all times due to the class being held indoors. Flautists in this class received different and more comfortable versions of the masks.

Senior flautist Prisha Narasimhan said it takes time and extra effort to insert the flute into the mask. The masks were tight for many at the beginning but the fitting has gotten better as flautists, for whom the masks must be manually tied at the end, have learned to tie them more loosely or to their individual comfort level.

“It’s not comfortable at all,” Narasimhan said, “but you have to adapt.”

Narasimhan said she feels safer with the masks than without but prefers playing outside so she doesn’t have to wear a mask.

“[The mask] helps more than if you were completely maskless,” Banerjee said.

Freshman tuba player Sid Arora also said there were some issues with tightness of masks around his ears, but for the most part band musicians have been successful in comfortably adjusting to them.

Junior Dylan Liujanto, who plays saxophone, agrees and said the adjustment to wearing a band mask doesn’t bother him anymore.

Both Luu and Duong said they feel safer because of the special band masks, and all students interviewed said they are glad their respective music class is back on campus instead of virtual like last year.

Cerna said safety has been a priority this year and the goal is to be able to run the music program successfully without putting anyone at risk.

Overall, he said he’s really focusing on going back to the basics with students this school year and spending time creating music together.