Course to be required for graduation for Class of 2030 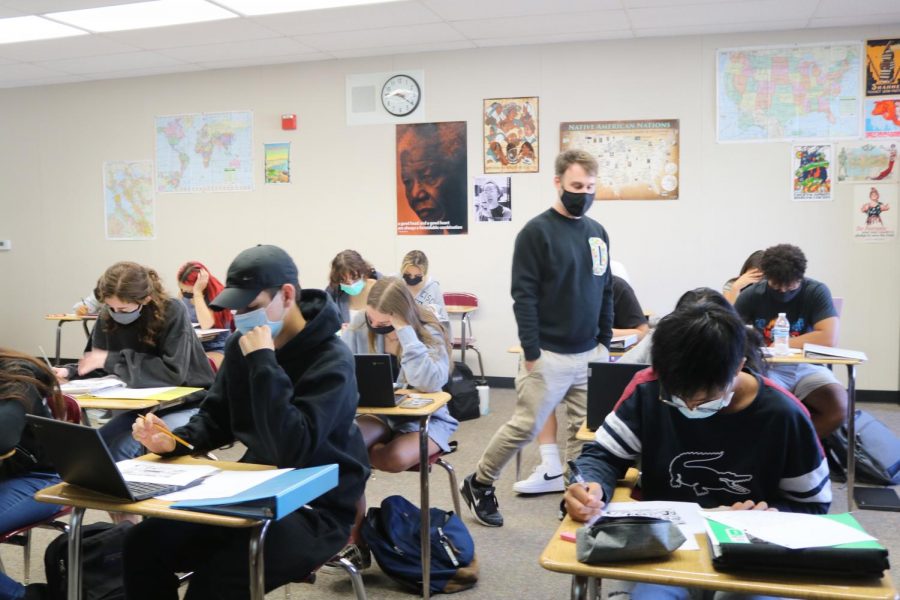 Ethnic studies teacher Benjamin Andersen walks among his students, who are learning about the different histories and cultures of people of color in the first year class.

Cal High’s new ethnic studies class is encouraging students to make a major impact on campus and in the San Ramon community as a whole.

The class unpacks the intersectionality of the histories, cultures and identities of people of color and inspires students to go into the community as activists to advocate for social change.

Ethnic studies is fueled by the mission to understand and analyze identity, relationships and power dynamics to change the world for the better, according to the book “Rethinking Ethnic Studies”, which was  published by Rethinking Schools in 2019.

California public schools will be required to offer at least one ethnic studies course by 2025-26 school year. Taking ethnic studies or any other class the qualifies will be a graduation requirement for the Class of 2030, according to KCRA News.

Senior Chris Iordanov joined the class after ethnic studies teacher Benjamin Andersen recommended it to him. Iordanov has begun to appreciate the community of interaction and the expression of honest identity.

He said he is looking forward to sharing his own experiences and hearing from others as well.

“This class gets people engaged and passionate about learning,” Iordanov said. “A lot of people don’t really care about other classes and don’t pay attention. I think this is one of those classes that changes that narrative.”

After one month of taking the class, Iordanov said he has witnessed a sense of community that he has never witnessed in any other class.

While he learns more about his own identity, Iordanov also hopes to become more aware about other cultures and their experiences.

“I’m passionate about learning different perspectives of history,” Iordanov said. “There have been a lot of misconceptions about certain topics and I feel that it’s important to learn different sides of the story in order to get a better understanding.”

Junior Isabella Waziri feels that ethnic studies is much different from classes she has taken in the past.

“In other classes, I dread the work. But with this class, I’m excited to learn,” Waziri said. “I just feel safe in this class to say what’s on my mind and not be judged.”

Waziri said the class has helped her to form her own opinions, reflect on current events, and express herself.

Senior Traniel Brown enrolled in ethnic studies for the opportunity to learn about his Black culture as well as others’ cultures.

He understands that others’ experiences may be different from his and encourages them to take the class in order to learn about their identity.

Andersen, who also teaches world history and global studies, was the only teacher who volunteered to teach ethnic studies this year.

“As a white male, I feel [ethnic studies] is a class that should be taught by underrepresented groups, but since no one else was stepping forward that’s why I ended up teaching it,” Andersen said. “I think sometimes it’s compassion. That’s all that really matters in the end.”

Going beyond the walls of the classroom, Andersen believes ethnic studies can transform the school and San Ramon community.

“I hope to create students who are confident enough to stand up for those things and have the knowledge and understanding of where those ideas, beliefs come from in order to push back against them and create a new campus culture that is more accepting,” Andersen said. “I feel that there are some people who do believe that the class teaches certain things like anti-whiteness or anti-Americanism but really, it’s about teaching the truth.”