Racism at Cal continues without consequences 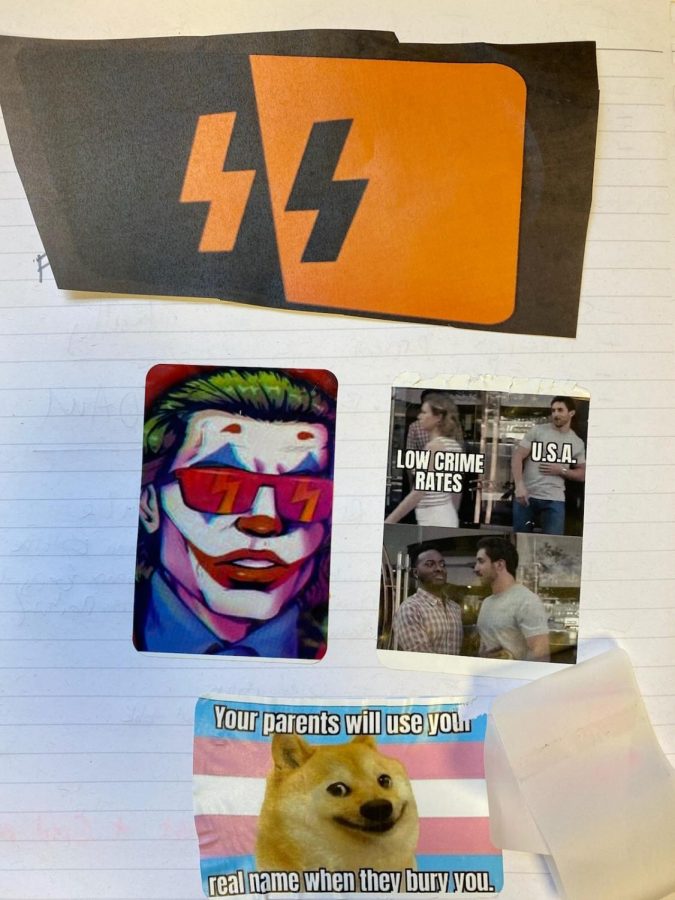 Racist and transphobic stickers were plastered across Cal high campus, but were only addressed in a school email.

When looking at how Cal High has handled racist incidents on campus over the past years, it’s clear to see the solutions aren’t beneficial in helping the progression of making this school a safer space free of racism.

Just within the past year there have been a number of racist incidents, including over Zoom classes during online school, writing in chalk on the parking lot for what was supposed to be a fun Senior Chalk Day, and placing offensive stickers that were racist, transphobic and  antisemitic all over campus.

These numerous events have continuously caused minorities who have been targeted to feel unsafe in an environment they should be allowed to enter without judgement.

In the emails sent addressing the multiple racist incidents Principal Megan Keefer states, “Regardless of whether the perpetrators are caught, we must work together as a community to make sure everyone feels welcome and safe.”

While I agree this is true, many students cannot and will not feel safe until these perpetrators are caught and properly disciplined for their actions of disrespecting entire groups of students on campus.

Two sticker incidents happened twice within less than a year of each other. The only reaction the school provided was sending an email explaining what happened, rather than addressing actions that can help prevent further incidents from occuring in the future.

And that’s not all. The first time the stickers were discovered, it took administrators more than a month to address it.

This shows the school doesn’t care about the gravity of the incidents and the well-being of those who were negatively affected by the environment these incidents were creating on campus.

Next, the school’s solution to racist remarks drawn in chalk before the first day of school was to hose off everybody’s work all together. This is misguided considering this was mostly punishing the people that worked hard on decorating their parking spots, not the actual offenders who should’ve solely been punished.

Seeing as Senior Chalk Day was a school-sponsored event school officials should’ve been present to be able to stop anything like this —  which did not happen.

The offenders put no thought in writing these racist remarks, which prove their most likely careless attitude to it being hosed off.

The solution should have been focused on the individual rather than everyone as a whole.

The rate at which racism has steadily continued at Cal shows that the actions that must occur needs to sprout from a more structural change. Currently the solution consists of an anonymous tip line and a handbook discourging hateful acts of any kind.

After all, look at the school’s reaction to years worth of racism compared to the reaction to a single incident at this season’s opening football game, where chants with curse words were directed toward an opposing team.

Den Rep meetings, a schoolwide video and an apology letter to Antioch High quickly resulted from that incident.

This clearly shows the school’s priorities, valuing athletic reputation over students’comfort on campus.

This stark comparison highlights two issues. It’s clear after this event that the school cares more about avoiding punishment from NCS and how others perceive Cal High than it does of the students themselves who are impacted by hateful incidents that have been ongoing for years.

Secondly, if the school wanted to enact real change and have students listen through a schoolwide workshop as it did after events of the football game it easily could.

Sadly, it has chosen not to do this. Admin needs to re-direct the focus of the current race and equity forums to specifically address what policies can be changed.

Seeing as the school is capable of administering workshops that highlight actions that must be corrected, this should’ve been used following countless incidents instead of the ineffective emails and lack of consequences for students involved.

The football game behavior has seen improvement after the workshop, so it may be a vital solution to implement such actions following future racist incidents in order to achieve a better outcome.

Solutions may discourage students from engaging in hateful actions from the start and allow for more open discussions, instead of the current taboo attitude.

Discussions will allow for more closure for students that have been made to feel unsafe because of these hateful acts.

When a pattern of appropriate punishment for those responsible becomes apparent then maybe will students begin to feel truly safe on campus.