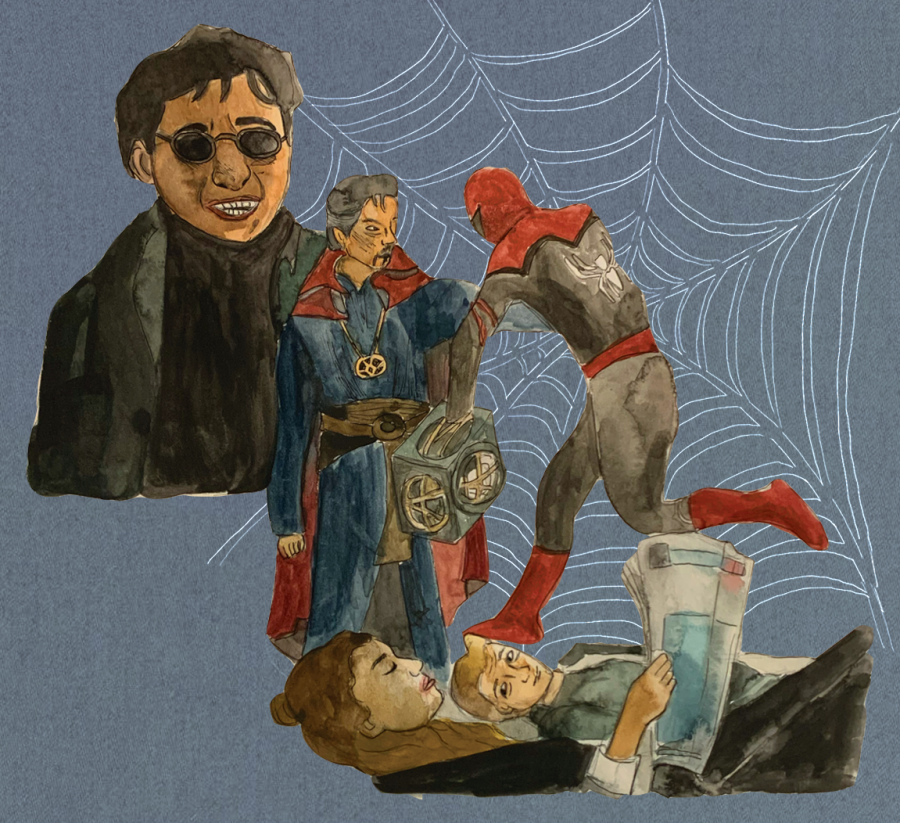 Characters from the new “Spider-Man: No Way Home” movie trailer in action which comes out on Dec. 17.

Two  years after Spider-Man’s identity was exposed in “Spider-Man: Far From Home,” Marvel has finally released the first trailer of the new “Spider-Man: No Way Home.”

In just the first 24 hours of the trailer’s release on Aug. 24, it received 355.5 million views worldwide, beating “Avengers: Endgame,” which received 289 million views.

Some Cal High students even say that once the new movie reaches theaters on Dec. 17, it will be a more successful and higher grossing movie than “Endgame.”

The new trailer of Marvel’s friendly neighborhood Spider-Man caused much excitement since it is the first Marvel movie to finally introduce the Marvel Cinematic Universe  “Multiverse”. But it has also received many questions and created confusion over the introduction of this new concept.

Fans recently have seen many examples of the MCU multiverses crossing over, the biggest one being in the Marvel Series, “Loki,” which was released on Disney+ over the summer. One of the examples of the multiverse crossing over in the series are the Lokis from different universes. All of them are “Variants”, or people who did something that disturbed the Sacred Timeline.

This timeline is a path of certain events that must happen. If these events do not occur, there is a disturbance in the Sacred Timeline, causing a branch timeline to form off of the sacred one.

In certain scenes of the new Spider-Man trailer, hints of villains from the previous non-MCU Spider-Man movies with Tobey Maguire and Andrew Garfield playing the roles of Peter Parker are shown.

Villains such as Doctor Octopus, Green Goblin and Sandman from the Maguire “Spider-Man’’ films are expected to join the ones like Lizard and Electro from Garfield’s “The Amazing Spider-Man”, in the new “Spider-Man No Way Home” film.

One of the major parts of the trailer was Doctor Strange’s appearance. In the three-minute long trailer, it showed that Peter Parker went to Dr. Strange for help because the whole world knows his identity and it’s causing too much conflict for him and his loved ones.

He asks Dr. Strange to make it so that Mysterio, the villain in “Spider-Man: Far from Home”, never reveals his identity. It appears in the trailer that Strange gladly casts the spell so that all is forgotten, even after Wong, another sorcerer like Dr. Strange, strongly advises him not to.

During the spell, Peter Parker interrupts Dr. Strange, causing some sort of outburst of energy which might lead to more conflicts, like the disruption of the multiverses.

After fans watched the trailer the question they are asking themselves is why Dr. Strange was so willing to cast this spell that seemed to have caused so much chaos.

Dr. Strange even said himself in the trailer, “The multiverse is a concept about which we know little about.”

Yet he tampered with it just so Spider-Man could have his reputation back. From how Dr. Strange acted in “Endgame”, calculating all the possibilities of how they would win and leading the rest of the heroes down that path, it seems unlikely that he take risks when it comes to Peter Parker’s issue. The only explanation for fans is that Dr. Strange had some sort of personal gain from this.

“I’m actually wondering if Strange might see a benefit in deliberately crossing the streams of the multiverse to get ahead of a chaotic crisis he knows is coming,” ErikVoss, host of Youtube channel “New Rockstar” said.

The trailer introduced so many conflicts and plot twists. Fans are eager to know what is going on in the new film.

“Where are they going with this?” history teacher Ben Andersen said. “Who is the main villain?”

Andersen is not the only one with these questions.

“I was extremely confused, not going to lie.” Adhikari said. “I’m not sure what to expect.”

But the biggest question on  social media is if Maguire and Garfield make an appearance in this universe as well?

“If the Spider-Man villains from the other movies will be in it, I don’t see why the other Spider-Mans won’t be in it either,” sophomore Thomas Coons said.

No one quite knows what to expect until Dec. 17.