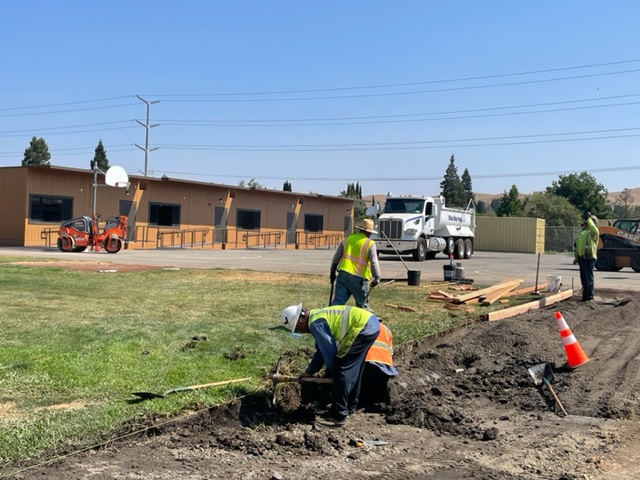 Workers built a path from the back parking lot to the portables early in the school year. The portables are still not being used because Cal's enrollment is lower than what was projected.

San Ramon Valley Unified School District has spent more than a half million dollars to lease four new portable classrooms that are going unused since they are not needed right now because Cal High’s enrollment is lower than projected, district administrators said.

The four classrooms, located on the basketball courts behind the main building, cost $410,000 to lease for three years, including setup, and delivery, said Danny Hillman, the district’s assistant superintendent of business operations and facilities. An additional $150,000 was spent to create an accessibility path for people with disabilities.

The portables were ordered in late 2019 when Cal’s population was projected to grow to 2,840 students in 2021 and continue to increase. But the projections could not account for the Virtual Academy, which reduced the on-campus student population by nearly 100 students this school year. Hillman said Cal has 2,829 students, not including Virtual Academy students, this year.

The student population is expected to jump to 2,950 in 2026 due to San Ramon’s housing plans for the Bishop Ranch area.

“Cal High in specific is going to continue to grow a little bit because of those new homes and houses,” Hillman said. “We needed to put some classrooms down to deal with that growth.”

Hillman cautioned that estimating the need for classrooms is difficult for high schools because class sizes fluctuate and there is no perfect ratio of students to classrooms.

“The goal here was to make sure we could house students over the next couple of years, and then if we need to add additional portables, we can as more housing comes online,” Hillman said.

Because of this uncertainty, the facilities department opted to lease the portables for three years instead of permanently purchasing them.

“We don’t want to permanently install them and then have them forever take up that space,” Hillman said. “We want to have the flexibility in the future that if the enrollment at Cal does in fact drop, or students make choices to enroll in other places like the Virtual Academy or transfer to another school in the district, then we can remove that portable.”

The unused portables arrived in early August and were fully equipped with utilities such as fire alarms and electricity, along with a separate portable restroom by late September,

Administrators have yet to determine how the portables will be used since Cal does not need the classrooms for teaching yet, assistant principal Tucker Farrar said.

One of the ideas was to use them for lunch time game rooms.

“[One portable would have] some space for students to play board games and hang out,” Farrar said. “Another might be a gaming room, where students can go in smaller groups and set up four or five TVs with some consoles and have gaming.”

Students would be able to use the game rooms during lunch and brunch under supervision.

Assistant principal Jeffrey Osborn also voiced the possibility of checking out some of the portables to teachers as needed.

“We have a classroom where the air conditioning is not working very well, and the maintenance guy has been out numerous times,” Osborn said. “It’s an option for that teacher, while the AC isn’t working or whatever the issue may be, to go down and use it.”

Teachers would potentially be able to sign up for the portables for a week at a time, and even check out two adjacent ones to have more space and split their students into smaller groups.

The Division of the State Architect approved the project with portable building company Mobile Modular in July.

The portables also require a path of travel necessary to increase accessibility for students with disabilities, as required by section 36.402 of the Americans with Disabilities Act Standards for Accessible Design.

Adjustments may be made to bring the path of travel areas up to standard. For instance, the path must be flat and the slope can only be a certain percentage in all directions. The path of travel will be completed during the summer of 2022.

The budget for school construction projects like this one comes from Level 1 developer impact fees, which are authorized by California Education Code 17620. The fees are collected per square foot from new residential and commercial construction within the district boundaries.

“We collect [developer] fees and use them whenever we have pockets of growth within our district,” Hillman said.