Trend could continue for students competing for college spots 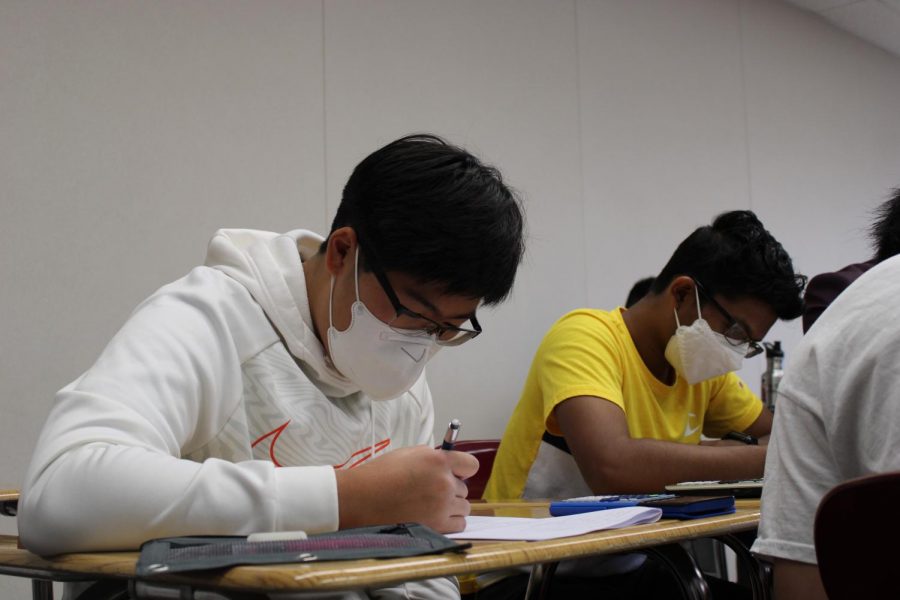 Sophomore Alexander Pak does work in his AP Calculus BC class. More underclassmen are taking AP classes this year.

As freshmen and sophomores jump into their first year on Cal High’s campus, more underclassmen are juggling multiple weighted classes than in previous years.

Teachers have noticed an increase of underclassmen in their weighted classes.

Von Sosen said he is still tired when he wakes up,  even after getting seven hours of sleep.

Chandrasekaran said he is taking multiple weighted classes because he feels pressure getting into college. Because he is Asian, he said h believes there is a lot of competition to get into a top-ranked college.

“I only had one honors class last year, and it wasn’t that bad,” Islam said.

Islam said her older sister took the same weighted classes she is enrolled in when she was a sophomore, so she feels she can always ask her sister for help if needed.

Freshman Ira Kaur also feels like she can take on more than her current weighted class. Kaur is taking Honors Precalculus this year. Although she describes the class as fast-paced and her most challenging class, she still hopes to take more weighted classes as a sophomore.

Although many students seem to have this attitude when it comes to weighted classes, Nguyen advises students to prioritize what classes they want to take based on their future interests, rather than just for a weighted grade.

Von Sosen and Islam decided to take their respective Calculus classes online after dropping the Calculus course at Cal.

Islam said that she wanted to focus on extracurriculars for this semester, and wants to take Calculus next semester. She also says she believes the course will be easier for her by taking it through DVC.

Von Sosen said she was not prepared for the class. Instead, Von Sosen is learning AP Calculus BC through Brigham Young University’s online programs.

“I feel like I can learn way better,” he said.