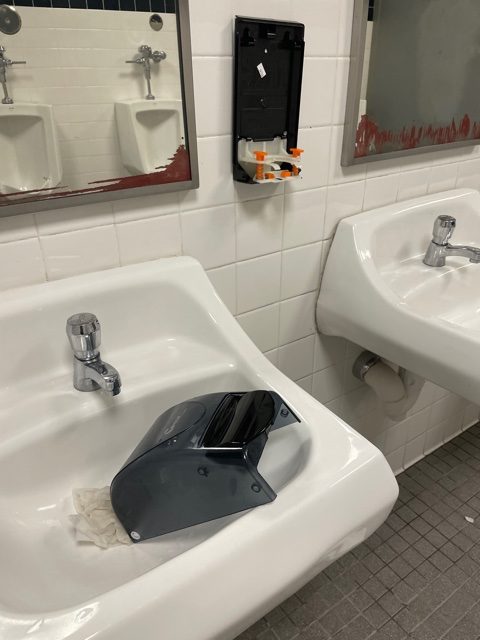 Left, a soap dispenser in the third floor boy’s bathroom is one of many that have been destroyed by students following the “Devious Licks” TikTok trend. Several bathrooms have been closed on campus because of vandalism.

When sophomore Jackson Polus went to the second floor boy’s bathroom during brunch last month and saw 10 guys huddled by the largest stall, he decided he didn’t need to use the restroom anymore.

After hearing rumors of something happening in the same bathroom in his Geometry class, Polus returned at lunch and found an entire stall door missing.

“The door was gone!” Polus said.

The stall door has since been reattached, head custodian Roberto Manrique said. But the incident was far from the only instance of vandalism on campus since school started in August.

Polus is one of many students who have seen firsthand the damage from the viral TikTok “Devious Licks” trend and other student vandalism.

The trend, in which students post videos of themselves stealing from or vandalizing their schools, first hit Cal and other San Ramon Valley Unified District schools in mid-September. While TikTok has censored the videos, they can be found under other synonyms, like “diabolical” or “dastardly” licks.

The trend at Cal resulted in students damaging every boy’s bathroom and possibly one girl’s bathroom over the span of a few weeks, assistant principal Jeffrey Osborn said.

The second and third floor boy’s bathrooms closed for five days because of the lack of toiletries and the absence of one of Cal’s three campus monitors, who help supervise the restrooms.

Manrique’s custodial department has spent about $1,800 on nearly 50 various replacement dispensers alone. Osborn estimates soap and paper towel dispensers cost more than $75 each, while metal toilet paper dispensers cost about  $100 each. Sink faucets have also been damaged and repaired by custodians.

“This is sad,” Manrique said. “This is just a group of students, and because of their fun, all the students are paying for this.”

The culprits have not been caught because there are no cameras inside of the bathrooms, Osborn said. Administrators can only monitor who goes in and out of restrooms.

“It’s a very long investigation to do all that,” Osborn said. “I really need students to help us keep bathrooms safe by letting us know.”

To mitigate further vandalism, campus monitors have been regularly sweeping bathrooms. Students who are caught will be disciplined and asked for restitution, Osborn said.

The “Devious Licks” incidents come after classrooms in the world language and main building were vandalized.

French teacher Miranda Kershaw’s classroom in the World Language building was broken into and vandalized on the night of Sept. 5. Two students were caught by surveillance cameras and legal action is being taken against them, assistant principal Tucker Farrar said.

About $2,100 in damage was done to Kershaw’s classroom, San Ramon police Cpl. Jarred Pereira said. The vandals entered through an unlocked window and broke through the window screen.

One of Kershaw’s two singing meditation bowls, which Pereira said are worth $130 each, was missing. Kershaw used the bowls to start her classes’ daily one-minute meditation sessions.

Kershaw entered her classroom on Sept. 6 a half an hour before her first period to find the damage. She promptly called Farrar to assess the situation. Farrar and Kershaw began cleaning up the classroom and made sure other classrooms had not been affected before students arrived.

After asking a few students to help clean the mess, Kershaw started teaching about 20 minutes after first period started.

“It is very unsettling, to be a teacher and have your space vandalized, and then have to teach right away,” Farrar said.

Junior Stephanie Hunt, who is in Kershaw’s first period French IV, Honors  class arrived early that Monday morning and with one of her friends helped Kershaw tidy up the room and remove debris from the ceiling with Kershaw’s vacuum.

“I just wanted to help because I really respect her as a teacher and I could tell she was really frazzled,” Hunt said.

Added junior Laura Byrne, “I think she was a little shaken, class started a little late, but other than that we were basically able to continue as normal.”

That Monday was the only day the class didn’t do their morning meditation, since the projector was damaged, so Kershaw couldn’t show her daily slides, Byrne said.

“[Kershaw] was obviously very upset, and it kind of scattered her thoughts,” Hunt said. “The rest of the day she was stressed about trying to get back on track for the actual work.”

“I had my car broken into 15 years ago, and they stole a photo album which was the only valuable thing,” said Farrar.  “It felt like that, so violating.”

The break-in comes after the main building was also vandalized in late June.

In this instance, two teenage vandals from another district damaged computers, keyboards, monitors, and tables throughout the first floor of the main building, Osborn. They also wrote with Sharpies on white boards, and emptied fire extinguishers, resulting in thousands of dollars of damage.

Cal is working with police and the district attorney’s office to seek restitution from the families of the vandals for the damaged items and the dozens of hours custodians spent cleaning the mess, Osborn said.

At the time, custodians were in the middle of summer cleaning, and furniture had been transferred to the hallways while the carpets were cleaned.

“It took weeks to dust the floors, to disinfect the lockers,” Manrique. “It took weeks, and then in 3 to 5 minutes, it went from good to really bad.”

Manrique had just left work at around 3 p.m. that day in June when he got a call that the fire alarms had gone off and started driving back to campus. When he entered the main building, he could only see fire extinguisher powder everywhere.

He called five other custodians to help clean the first floor, but it wasn’t until after clearing the discharge from the fire extinguishers that they found the broken furniture and technology.

It took two entire days and 10 custodians to clean and repair the furniture and scrub the first floor from top to bottom.

“Teachers didn’t have a clue what happened,” Osborn said. “Our custodian crew is amazing, and they were able to restore the classrooms back to how they were.”