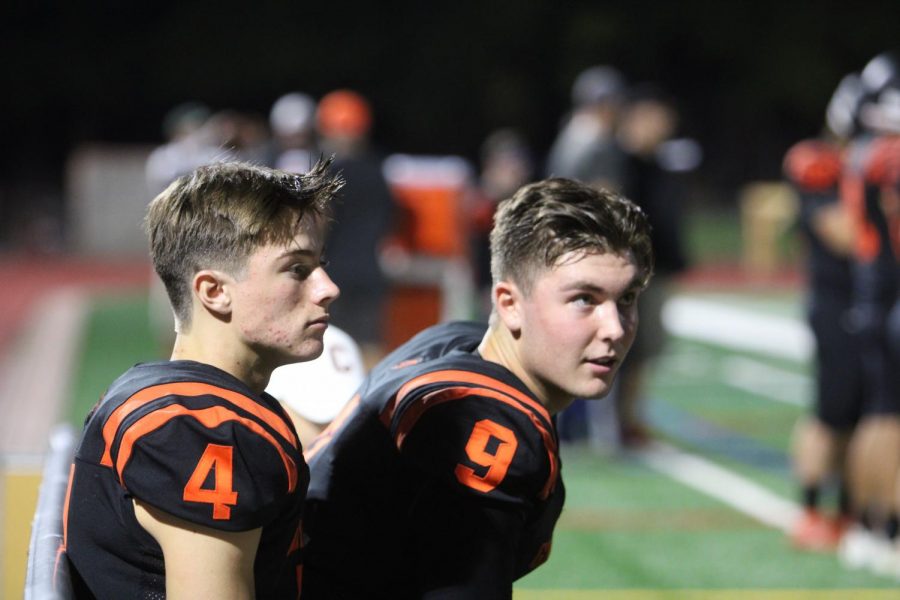 Wide receiver Jack Calcagno, left, and Teddy Booras have developed an incredible chemistry this season and are among the tops at their respective positions in the North Coast Section.

For the boys in black and orange, all the blood, sweat, and tears are finally paying off for them out on the football field.

With a 7-3 record, the Grizzlies are looking to keep the momentum rolling in the NCS playoffs and come out on top of their opening round revenge game at Monte Vista on Friday night.

The team is led by the senior duo of quarterback Teddy Booras and wide receiver Jake Calcagno, dubbed ‘Can’t Guard Cags’, who have combined for some of the best numbers in the North Coast Section this season.

After a recent 49-34 win against Amador Valley on Nov. 5, Booras now ranks eighth in NCS in total passing yards with 1,921 and sixth in total passing touchdowns with 25. On the receiving side, Calcagno is now tied for first in total touchdowns among wide receivers with 18 (17 receiving, 1 rushing) and is first in the NCS with 1,238 receiving yards.

These two have developed a chemistry that is second to none, and this year it has absolutely skyrocketed. More than 58 percent of Booras’s 134 completions have gone to Calcagno (78 catches). Calcagno also has been on the receiving end of for more than 64 percent of Booras’s total passing yards and 68 percent of his touchdowns.

How did these two, who met freshman year, become so dialed in with each other that they became one of the best duos in the NCS?

“Really, we’re just always together,” Calcagno said. “Whether it’s working out, running routes, swimming, playing video games, or hot tubbing, we’re always hanging out. We have made a lot of memories together, both on the field and off the field.”

The two best buds became friends back in freshman year.

“We met on the football field, and it was one of those things where we could tell we were going to be friends,” Booras recalled. “We actually knew about each other before high school, through baseball and stuff, but we didn’t officially meet until freshman year.”

“We’ve always both felt we’ve had a lot to prove, and it’s resulted in us playing with a chip on our shoulder,” Calcagno said. “People have always doubted my size, our offense, and our school and that’s one thing that has really motivated the both of us.”

Calcagno and Booras started playing football freshman year because they wanted to try something new and thought it would  be fun. Back then, the Cal offense was slightly different than how it is today.

“When we both made it to varsity, we were introduced to the veer offense,” Booras said. “Over COVID, Coach Cal installed the spread offense and it allowed us to really open up the offense by basically throwing the ball more.”

When Billeci stopped coaching, Coach Calcagno took the offense and completely flipped it on it’s head, installing the spread and allowing it to open up for Booras and his recievers. With a shortened COVID season, this 2021 campaign has been the year where they have been fully able to learn the offense.

“Teddy has done really well in this offense and I’m super proud of them for not complaining about a thing and taking the time to really study it,” Coach Calcagno said. “I believe this offense has really allowed them to excel and grow as players.”

From a numbers standpoint, it really has allowed them to improve and create a lot of trouble for opposing defenses.

Their teammates have had to go against them in practice and know just how dangerous the duo can be to try and guard.

“It’s really difficult,” senior linebacker Nathan Quimby said, “They have a lot of chemistry and it makes it really hard to line up against them because they have that connection.”

Along with the difficulty, Quimby added that the two never stop working.

“They are always going 100 percent, so it pushes you to go 100 percent as well because you don’t want to get exposed,” Quimby said.

The Booras to Calcagno connection has experienced some great moments the past two seasons, but one stands out.

“Definitely the game winner at home against Clayton Valley,” Booras said. “There were 15 seconds left and I threw a corner post to Jake and we won the game (19-18). It was an awesome feeling.”

Cal lost last year in the final minutes against Clayton Valley, so this became a revenge game, and to win it in that fashion after losing a heartbreaker last year was something special.

Moments like these have created special bonds and memories, for everybody involved.

“As a father and coach, it has been incredible,” Coach Calcagno said. “I’m extremely proud of these boys and the strides they have made both as football players and as young men. I’m just very grateful to be able to watch them and help them mature along their paths and see where they go.”

It has been a crazy season up to this point for the Grizzlies, but they are hoping they can string together some magic for their last ride as seniors. Booras and Calcagno are both looking to play football in college, but know their paths will most likely take them separate routes.

Through playing football together, they have been able to learn a lot about each other and know they will take a lot away from the experience.