Live theatre is back 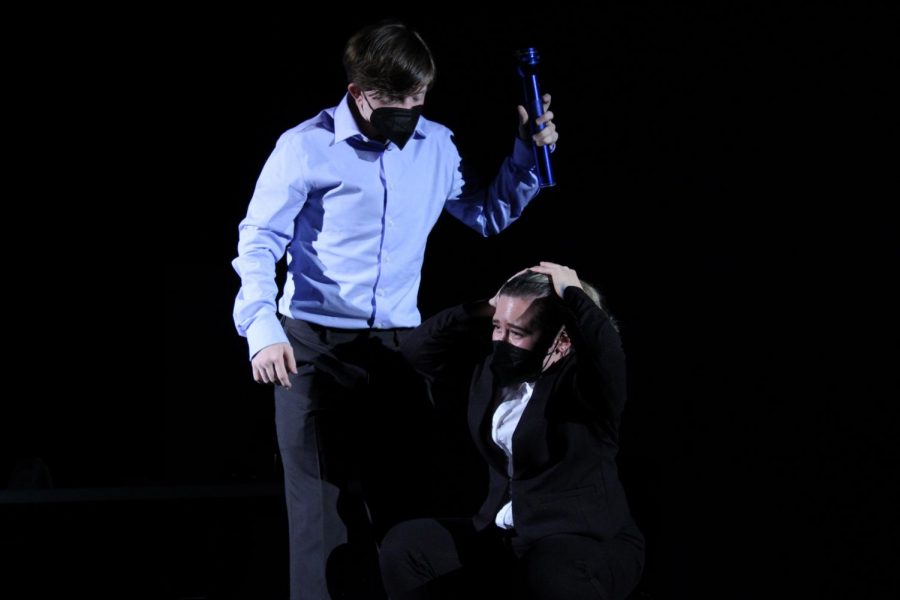 Senior Ryan Hannon-Hippe, left, and junior Quinn Morgan perform in the one act play "13 Ways to Screw Up Your College Interview" on Oct. 27-28. The "Student Directed One Act Play Festival" featured three short plays and was the first live performance by Cal High drama since the COVID-19 pandemic hit in March 2020.

Live theatre returned to campus last week, and drama students couldn’t have been any happier.

In the first live performance since the COVID-19 pandemic shut down the school in March 2020, the Student-Directed One Act Play Festival was a hit during its two-night run Oct. 27-28 at Cal High’s theater.

“I am very excited to have live theatre back!” drama teacher Laura Wood said before last week’s performances. “It will be a bit different with everyone wearing masks, but we are ready for the challenge.”

Even though half of the actor’s faces were covered with masks, they still could be easily understood, had fantastic energy and did a great job conveying interesting characters. Every script used in the festival was produced in 2015 by the professional actor and playwright Ian McWethy.

But something that separated this performance from the other live shows was that it was directed by Cal students.

“The student directors had a good amount of control over the blocking and daily rehearsals with their actors,” Wood said. “I chose the scripts and have given the directors and actors notes along the way.”

Junior May Tijero directed the first play called “Bad Auditions by Bad Actors”, which was about two people looking for actors to play Romeo and Juliet for Shakespeare’s famous play. The main characters were the casting director played by junior Amelia Saravia and her assistant, Roger, portrayed by junior Kathir Rajesh.

The actors trying out for Romeo and Juliet have odd quirks. For example, one actor was angry the entire time, while another one couldn’t notice the difference between real life and a play. There also was a girl who waved her hands in the air all the time, distracting the audience. The actor’s quirks make the casting painful for Saravia, who had great reactions to the wacky antics of the actors. Rajesh assisted Saravia with as little effort as possible, which made for funny banter.

The actors who played the strange method actors were juniors Feona Wong, Ella O’Connell, Emma Kollo, and senior Sean Martin plays Josh, who really stole the show in the first play. During the play the humorous antics of the actors earned many chuckles from the audience.

All of the actors displayed an abundance of energy and oozed a unique brand of insanity which made sure every new actor introduced would intrigue the audience. Every time a new character was introduced, the audience wondered what the next character’s quirk would be.

The second play, “The Internet is Distract- OH LOOK A KITTEN!”, was directed by junior Morgan Kent and told the story of a person with ADHD trying to finish an essay on the Great Gatsby. In the play, websites are represented by actors and were portrayed as sinister and manipulative, which is reminiscent of a song in Bo Burnham’s comedy show on Netflix called  “Inside”.

Those of us with short attention spans could easily relate to the main character Micah, portrayed by junior Briana Farias. One gag was a video game where players throw pigs at some old lady. It’s a nice nod to a popular game called “Angry Birds” in the early 2000s.

Junior Ammar Wahab, who portrayed Google, had some nice development being more and more sinister throughout the play and finally being defeated with his fellow applications via pigs.

The other actors were Izzy Magee (Facebook and Micah’s mother), junior Alex Vanier (Taylor), sophomore Noah Shallcross (Grandmother, Mark, Ad and Clickbait). It would have been nice to see the darker aspects of some of these applications from McWethy but I understand it wouldn’t fly too well if shown in most places.

The final play was called “13 Ways to Screw Up Your College Interview”, which detailed two interviewers (sophomore Shea Daly and junior Quinn Morgan) desperate to get one more kid into college.

The final play felt similar to the first, so another one of McWethy’s scripts could have been chosen to shake things up. Despite this, the performances for this play were energetic and fun like the others. The banter from this play was the most enjoyable because it felt much more smooth and down to earth.

Overall this play was a fun time and worth watching.