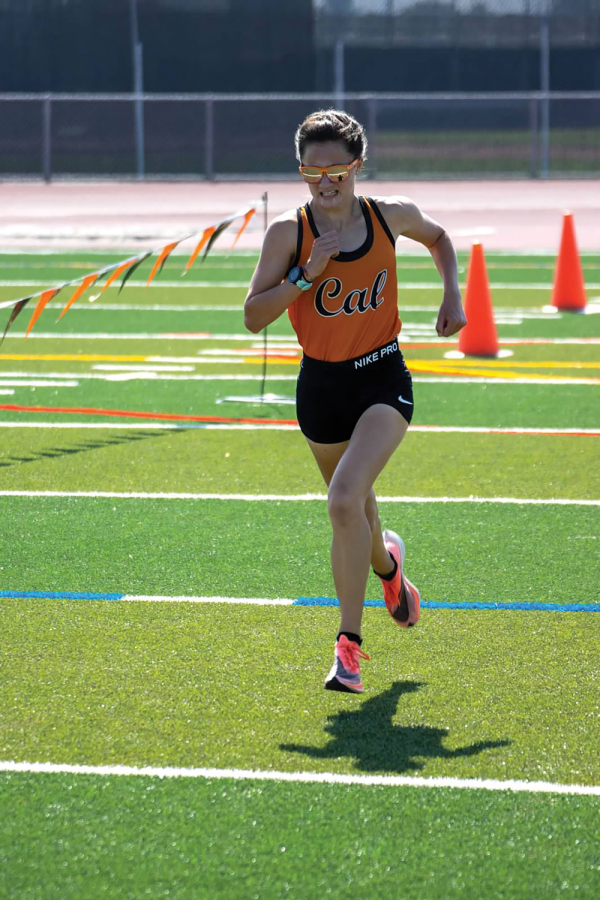 Chavez trains hard to continue her run of excellence.

Being team captain, qualifying for state championships, and earning a college scholarship in athletics might sound like a dream.

Chavez has been one of the Grizzlies top distance runners all four years at Cal High and recently accepted a scholarship from the University of Colorado, Colorado Springs next year.

Although Chavez joined Cal High’s cross country team her freshman year and her name has become synonymous with distance running for the Grizzlies ever since, her interest in sports stemmed from a much earlier age. And it wasn’t all running.

Chavez participated in soccer, basketball, and swimming, reaching high competitive levels as a swimmer, as a child. But running had always felt natural to her since she accompanied her parents at triathlons while growing up.

Despite the never-ending effort running long-distance requires, Chavez describes it as a sort of therapy and a productive way to spend her energy.

“A lot of people say they love cross country because of all the people they meet and the friends they make, and I love that,” said Chavez, who also runs distance races for Cal’s track team. “It’s just I love running itself, too.”

Chavez’s dedication is more than evident in her busy schedule. Practices are generally two hours long, and as team captain, she has additional responsibilities, such as being in charge of core workouts and cooldowns.

“It’s a lot, but I spent four years figuring out how to manage my time with school and friends and all that, so I’ve got it down,” Chavez said.

Cross country coach Nick Shea has been a part of Chavez’s journey throughout high school. Although Chavez’s performance has progressed by leaps and bounds, Shea said her proactivity has been constant.

“She’s really turned into a leader, and I think some of that sparks off of her own motivation and how other people feed off of that,” Shea said.

Sophomore Rachel Choi notes that as team captain, Chavez’s awe-inspiring work ethic sets a high standard. But rather than it being intimidating, it’s been more of a driving force.

“She’s gotten a sub-18 for one of her three-mile runs,” Choi said. “That’s definitely something I hope I can increase my speed to.”

Senior Jenny Lin, the second ranked runner on the team, said that Chavez doesn’t hesitate to help her peers, whether they have no experience or are preparing to run professionally.

“Her grit and resilience has grown so much, and it inspires the rest of us,” Lin said. “It’s like we run seven miles, and we’re all tired, and Madison is still there like, ‘go, go, go!’”

Chavez has encouraged Lin both on and off the field, the latter through college advice.

The NCAA consists of three divisions, with Division I the most challenging. Lin wasn’t sure if she had the qualifications to run in college, but Chavez wouldn’t let her drop it.

“Madison kind of opened the possibility [to me] that you don’t have to run in Division I. There’s Division II, Division III,” Lin said.

Despite all of her accomplishments, Chavez said there’s never a point where she has helped her teammates too much. Their love for each other is what she admires most about them.

“It inspires me to do well for them because cross country is very much a team sport,” Chavez said.

This was especially true when Chavez wasn’t at the top of her game. During her sophomore year, she was discouraged as she was racked with injuries throughout the season. But she credits her team, coach, and family for uplifting her.

“I would say my coach helped me a lot during that time, because I was really hard on myself when I was injured and he just helped me to see that,” Chavez said.

She didn’t let the time go to waste though. Instead, she still attended practice to cheer and improve from observation.

“[It gave] her a better sense of spatial awareness and what it really takes to be dedicated,” Shea said.

That year, Chavez qualified for state championships and finished with the school’s seventh-best time (18.52) in the five-kilometer race. This is her best time for Cal, but she hoped to top it on Nov. 20 at NCS.

Her previous injury gave her more of a reason to commit to her passion, and now, she’s committed to running at Colorado Springs, a Division II school.

Many of her close teammates are extremely proud of this.

“[Chavez] is one of the strongest girls I know,” Lin said. “She’s a girlboss.”