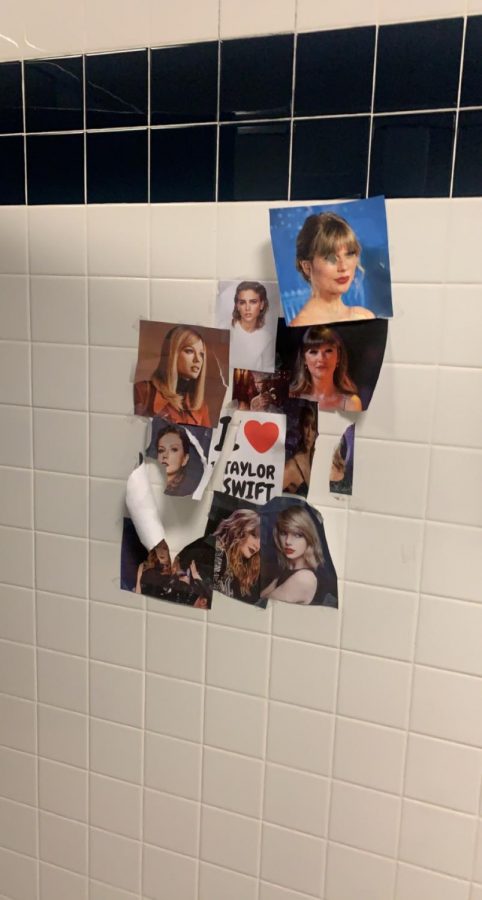 Fans of Taylor Swift at Cal High create a shrine in her honor located in the first floor all-gender bathroom.

She has been dealing with contracts and record labels that have indeed caused a lot of trouble.

At 15, Swift was signed to Big Machine Records. The contract included ownership of the masters of Swift’s first six albums. A master is the first audio recording of a song.

After Swift’s contract ended with Big Machine Records in 2018, talent manager Scooter Braun took over. Swift and Braun are not on good terms. Braun bought Swift’s original recordings of her first six albums and sold them for more than $300 million to a company called Shamrock Holdings.

“Essentially, my musical legacy is about to lie in the hands of someone who tried to dismantle it” Swift wrote on a Tumblr post.

Swift fans Jaden Becker, a freshman,  and Anushka Jelwalikar, a sophomore, share similar sentiments that Braun is a bad person.

Becker said it’s annoying to see Swift put down time and time again, when she has worked so hard to get back the music that belongs to her.

“She has a right to [her] original albums,” Becker said.

Jelwaliker believes that the music industry did Swift dirty and it was a combination of how the industry treats women and who Swift was surrounded by at the time helped cause the issues.

“A lot of this whole contract thing comes down to misogyny,” Jewalikar said.

Swift owning the publishing rights to her old songs has turned out well. She remade her 2008 album “Fearless” with the new title of “Fearless (Taylor’s Version)”, which was released in April.

Swift released her version of the 2012 album “Red” on Nov. 12. Fans were eager to hear the highly anticipated “Red (Taylor’s Version)”.

Jewalikar was one of the many fans who couldn’t wait for the album to drop. Their favorite song “All Too Well” will be 10 minutes long. They believe that it was such a powerful move of Swift to re-record her albums.

“[She] taught me how to deal with people who don’t like you in a mature way,” Jewalikar said.

Swift has influenced so many people as a person and artist. She has shown so many young people to fight for themselves and perservere through life’s challenges.