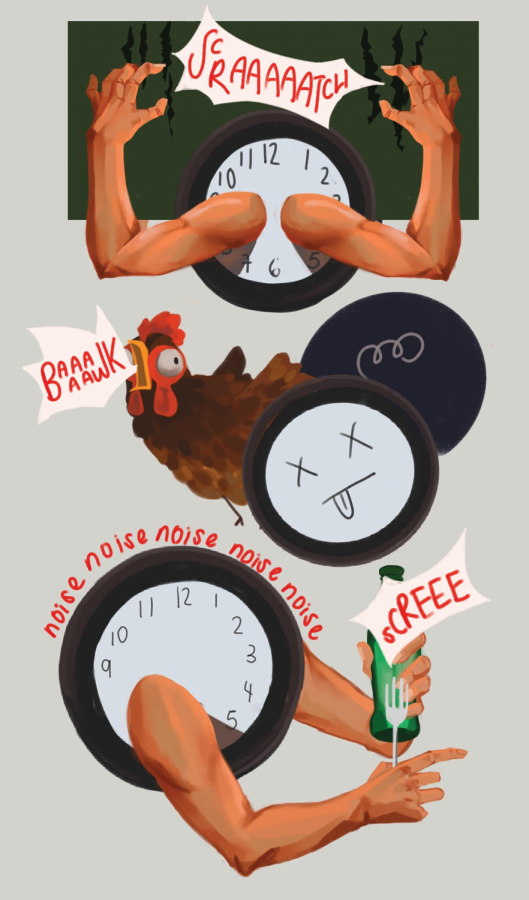 Ah, clocks. Gatekeepers of time, space, and maybe some other things, but most importantly, they’re wonderful to watch when I have an hour to do my English test.

Well, at least when they aren’t failing to do their one job. They’re not being paid, so I understand the struggle.

There are multiple classrooms with broken clocks (or, at least, housing the restless spirit of a timekeeper passed on.) Some say, to this day, screams are still heard from classrooms that once housed a broken clock. Others, of course, say that  I’m just making that up.

The clock problems on campus have a very long and colorful history, going back at least a month. It’s a tale as old as time, but I’m not paid by the word, so we’ll just skip over the fine details. I also went through every history book in the school, and I haven’t found anything on this riveting chapter in the story of human existence. Evidently, somebody at the publisher has some revisionist agenda.

However, this problem is not confined to the past. There are even more weird clock things in recent times, once again proving history repeats itself, or at least rhymes as well as vacuous modern rap music.

To be honest, these clocks terrify me, man, they can’t be avoided. First, I go to Michelle Mascote’s English class, and the clock’s been stuck at 9:38 and 35 seconds for forever, I think since the Fall of Rome. Attila could’ve at least called the clock-tor after he was done pillaging.

Then, I go to Jacob Martin’s chemistry class, and the normal clock just randomly stopped working after I thought I could rely on it, ticking and tocking the time of I don’t know where. It still moves, but I honestly can’t follow what drum that thing marches to, maybe the Energizer Bunny. It’s like Schrödinger’s Clock, it makes sense, and it looks right, but once you look at it again it makes no sense. If you know how it works, please, don’t even try to explain it to me, I’ve spent too much of my life thinking about it.

But it’s not just my personal experience. There were incidents everywhere.

First was the event revolving around English teacher Sean King’s clock. The poor man could never catch a break. His first clock was as out of touch as a corporate Twitter account: it was off. It was removed, and for a while, there was just a hole in the wall with a wire sticking out, the gruesome remains of once great technology. King described it as “unsettling,” and I’d have to disagree. There’s almost no other combination I like more than teenagers and exposed wiring.

The next clock has a similar story, proving through a simile that corporations aren’t your friends and are all the same (even if their unpaid public relations intern has a spark of witticism in their downtrodden soul). Finally, King called for his clock to be set right, but the old timepiece was instead removed entirely, to be replaced by a square shaped imposter.

King remarked on how the new clock moves in rigid ticks, while the old one would move slowly and consistently. He wasn’t sure which one he liked more, but the new clock reminded him of the endless ticking of time.

Our final story revolves around AP Government teacher Brandon Andrews. It was just a regular day, with one exception: The clock had been sabotaged by the violent squirrels that live in colonies in the walls. (I know they’re there. The voices told me so. Mr. Andrews said the reason was something else, but he’s just part of the devil’s plot.) So, the clock began to make a noise equivalent to the dying wheezes of animals, much like the very real rats in the wall at Andrew’s old school. It’s a sound that lets us know when someone’s time was up.

The timepiece began to make a clicking noise, perhaps desperate cries to be forgiven after a life of clock decadence and clock sin. And, like “The Tell-Tale Heart,” the sound grew louder and louder. Its volume grew so unbearable that Andrews, akin to the protagonist of that old Edgar Allan Poe short story, couldn’t handle the guilt, and ordered the poor children out of the class into the freezing winds and temperatures of the East Bay in October. Might as well have sent them out to work on some Siberian roads, the monster!

While Andrews did not rip up his floorboards like “The Tell-Tale Heart” (though I have confidence he can tear through linoleum with his bare hands), a similar story happened in philosophy teacher Tyler Gulyas’ classroom. The difference between the two, however, is that Gulyas tore the clock straight off the wall, like the Sword in the Stone. An even better fairytale to tuck your kids into bed with, I’d say.

Clocks are one of those things we don’t think of too much ,but boy, we would all be lost in the dark without them. Too bad clocks seem to be one of the things being lost to the Information Age. We could always look at our phones for timekeeping during 50-point exams, but some teachers continue to resist the unstoppable tide of progress. And, friends, is this form of clock watching really the same?