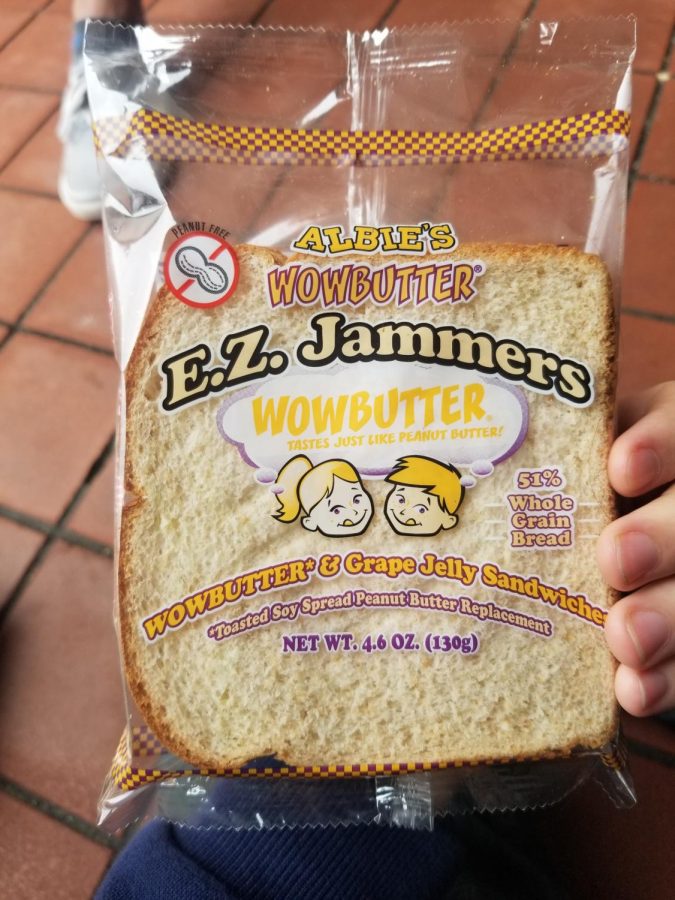 The unique tasting soy butter and jelly sandwich is one of the many tasty treats offered as part of the new free school lunch program.

Ever since the beginning of the year, the food served during Cal High’s 1840’s factory worker length lunch schedule has been free for all.

But with this new priceless sustenance on the school’s fine china cardboard lunch trays, the quality of the food has been called into question. Until today.

I, Jordan Dylan “Face-Stuffer” Vereen, have sought out to answer the critical question of this generation: Is the food worth the hefty price of zero dollars and zero cents? There’s a reason my middle name is relevant. I once knew a guy named Dylan who bit his tongue so hard he couldn’t taste anything but blood and soreness for a day, and I consume the school’s food to honor his family name.

So, to stay as fair and unbiased as a court of law when there’s no money on the table, I have not picked and or chosen the cuisine I have sampled, and now am to describe to you. Instead, I have eaten five random meals on a random week, so the Feds can’t track me and silence my grand, revolutionary voice.

To preface this, I’d like to set my expectations.

The Friday before I began my food critic experience, I grabbed what looked like a peanut butter and jelly sandwich from the cafeteria. I took it to my regular dining spot, innocently tearing off the wrapper and looking to enjoy something simple for once. I took a bite, however, and was forced to spit it out, mostly due to the texture of dry, uncooked cake batter. And then I looked down and saw the unholy inscription: “Soybutter and Jelly Sandwich.”

I was, and still am, at a loss for words over this. Just writing this makes my eye twitch involuntarily. I’ll move on from the trauma, but just keep in mind my expectations. And, for today’s wonderful review, I’ll rate each meal on a scale of one to five soybutters, with one being the worst and five being the best.

Monday, Dec. 6: I decided to eat a Turkey Taconada instead of nothing, because I love you, dear reader, and will make sacrifices for your sake.

Now, I am already not a fan of Hispanic cuisine (please don’t cancel me over it,) but, I gotta say, my family’s Taco Tuesday (ironically, never on Tuesdays,) gives me a better taste of Latin America than the Turkey Taconada. At least my meat-and-vegetable balls I call “soft tacos” don’t have a taste that reminds me of flour.

Now, as your dad will say, first impressions matter. The first thing that caught my attention was the fact that the food was burnt. The second eye-catching observation was that it looked like a large dumpling with weird orange coloring seeping out the broken opening of the food. The inside reminded me of dog food, and, taking a bite, I hoped it was just a coincidence.

Tasting it, however, was an entirely different story. I will, unequivocally, say with no malice in my heart, that the Turkey Taconada tasted alright. It’s what you would expect from eating school meat products. Not good, not bad. It was very dry and a little bland, but it was just…fine.

I feel a little ashamed saying that, because it was one of the better things I’ve tasted at Cal’s cafeteria, and I feel almost as if I’ve been conditioned to enjoy this very questionable food. 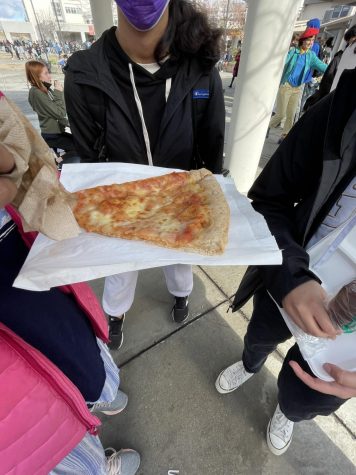 Tuesday, Dec. 7: I chose pepperoni pizza because I was putting off trying something new until Thursday, when pizza was to be served again. Sure, this goes against my mission as a food critic, but, hey, pobody’s nerfect.

I felt very strange reviewing this pizza because it brought back so many memories! Like the time when the school randomly switched from pepperoni to chicken pizza and it somehow wasn’t as good, or when in fourth grade I wrote an essay on why Little Caesars Pizza sucked. What I wouldn’t give now for a box with the Roman emperor on it now.

I guess the first thing to consider was the presentation of the food. My first sight was the little bag with grease bleeding through it, so that’s just peachy.

The food itself, however, was much less ambiguous. It was strangely tough, with cheese like literal cardboard and the pizza staying straight and erect, even if I held it sideways. I also noticed the bread to be as dry as a Sahara summer and famine-level amounts of tomato sauce.

The taste itself, however, was the most interesting part. The pizza felt and tasted like it had been dipped in a tub of lard, which would explain the strangely sour aftertaste. It tasted of many spices, but I’d never call it spicy, you feel me? Or, maybe, the thing was just cooked with a mound of grass on it. I’m not the chef.

But still, despite all this, the food tasted…okay. And, would you look at me weirdly if you heard I felt refreshed, after the meal? Maybe that’s proof we’re all just robots, and the excessive grease was pure oil for our internal engine.

I’m not gonna lie to you, I thought I was walking down easy street, considering the past few meals. Two whole days of decent food? In the school cafeteria? Impossible! Well, my prayers to be able to gag on a meal were answered.

Wednesday, Dec. 8: Fettuccine alfredo and meatballs day. For starters, I have no clue why you’d serve cheesy pasta with meat. Now, I’m no Iron Chef, and I also haven’t been berated by Gordon Ramsey, but that seems like a poor mixture of food. This is especially true when you consider the layer of water in the meat ball-holder-thing part of the tray, like my microwaved meal was a damaged destroyer that had sprung a leak in the boiler room.

Furthermore, the presentation made me dread sampling the fettuccine. The meatballs looked more like undercooked turkey stuffing than anything else, and the pasta had the appearance of discount Mac-&-Cheese. If something could look dry, it would be this unfortunate meal, alongside a picture of cracked, drought-stricken dirt.

And finally, the taste test. I won’t even entertain the idea that I was pleasantly surprised, like the past few days. I honestly have nightmares remembering eating that garbage.

I could only eat about one-sixth of a meatball before spitting it out like it was the hot surface of the sun, so there’s that. My memory feels frazzled recalling the taste and texture, but my best guess that I’ve pulled from my fractured mind was a taste like fish food. I’d have no idea what that tastes like, of course, don’t you worry your little head about it.

And the pasta? Well, it’s almost too hard to say. It was so brittle, I could barely get any on my spork. And, while the previously mentioned soybutter was similar to uncooked cake batter, this pasta was more similar to that stuff, but burnt. So, it’s an improvement. You know, I like to think I’m an optimist.

Oh, and the cheese? Just imagine plastic, but wetter and warmer, and that comparison is much more accurate that words can describe.

Overall, the fettuccine alfredo with meatballs was 0.5 soybutters…out of 0.6 soybutters, so it was pretty good!

Thursday, Dec. 9: I seem to have developed short term memory loss, because, for the life of me I can’t remember what I ate (or who I am, or why I’m here, but I’ll cross that bridge when I get there). Must be something in the water. I’ll move on, maybe it’ll come back to me, like how a moth comes back to a zapper.

Friday, Dec. 10: I went with the pepperoni calzone. The presentation was just as masterful as all the food served here at Cal. I’d compare it to anthill, but with no ants and no hill, and instead a large, bready ball. So, not really accurate to an anthill, but what are you gonna do, sue me?

It also had the patented “bag condensation,” of course, can’t forget that. Taking a bite was like a lion chomping down on a zebra’s legs, with pizza-guts and pizza-blood spilling out all over. I’d bet a lion would rather chase a zebra than eat this stuff.

The bread part reminded me of hardtack with flour sprinkled on it. I’m sure you can guess by the name that this is not a compliment.

The inside was…interesting. If astronaut pizza existed, it would be pretty close to this. It just tasted like pizza, but…off. It’s almost uncanny to think of it again, I physically can’t scrape together another description in my brain. I felt strange taking bites, even if it tasted alright. I could almost feel my brain melting into the cheese I was consuming.

I just have a very hard time describing this stuff. It’s, just, like…why don’t you get normal pizza? Actually, I know why, because the cheese wasn’t cardboard and the sauce was actually there, so there’s a reason for the calzone’s existence, I guess.

Overall, 2.5 soybutters out of 5. Just drool into your food and don’t think too hard.

I guess that’s…oh, wait, I remember the Thursday meal now!

Thursday, Dec. 9 (Take 2): What was interesting about that day was my struggle to figure out what exactly I was eating. The signs on the Cruising (a more representative word would be “stagnant,”) Cafe cart was always blocked, because I’m short, and I couldn’t see over the congregation of giants that that line was. I could only see the word “pretzel.” Would the school serve warm pretzels for lunch? No, too expensive. Would they serve packets of little junk food pieces? I wouldn’t put it past them.

But when I got to the front, I couldn’t believe my eyes! “Pretzel Chicken Hot Dog”, a title with the same elegance of the zebra turkeyfish. I’ve barely eaten pretzel bread, much less with a mysterious amalgamation of unknown ingredients like a hot dog.

Taking my new baby back to my luncheon spot, my hopes were low, however. The condensation on the bag was the first tip off, reminding me of the “definitely-not-ham” bagged turkey sandwiches. At least this meal is up front about its uncleanliness to one or two faiths.

Taking a bite, however, was…good? Yes, good. For real? Will I rate something as genuinely good?

No, I have to be obnoxiously pessimistic. I have to be snarky, sarcastic, and a choosing beggar. It was bad,yeah, bad. The smell of my breath was like it was after every hot dog I’ve eaten, and this is particularly egregious because…um…because, I said so! It was like the kitchen was flooded, because, it um, it was a bit soggy!

Oh, who am I kidding? It was a perfectly fine hot dog! There was nothing especially good or bad to write home about! Sure, there was only ketchup, but it was a reasonably warm and tasteful meal. Kinda hard to write jokes when it’s so solid.

And that’s about it, huh? Man, it feels weird being done. I’ve put so much tender love and care into this thing (at least more love than the machine packaging the items in this review did,) and I’m done. Weird.

Overall, I rate this food review 0.1 soybutters out 5. It absolutely sucked, and I should be ashamed of myself.