Grizzlies shoot for fifth title since 2014 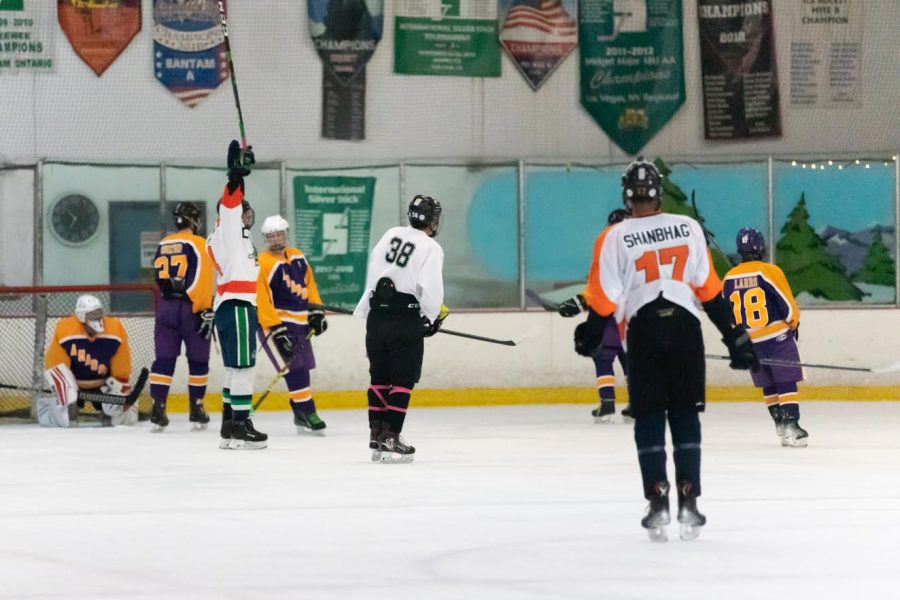 The Cal High hockey team has gone undefeated against its opponents this season, which is framed as a seven-game tournament.

“I am very confident in my team winning this season and so far we’ve gone undefeated,” junior defenseman Eshaan Shanbhag said.

In Cal’s first game of the season on March 19 against Amador, the team skated to an 8-4 victory. They also played against the Grenada Matadors on March 25, winning in an easy fashion by a score of 9-0.

The games are usually played at Dublin Iceland.

Another challenger was EBAL, which includes players from San Ramon Valley, Dougherty Valley and Clayton Valley high schools. EBAL fought hard against the Grizzlies but the Cal team struck back in great fashion and beat EBAL 11-5 on March 26.

The Grizzlies have been able to be dominant this year because of the large amount of experience they have over other schools in their league.

This helps the Grizzlies have a fluid offense with players like senior Max Hove scoring at least three goals in four of their five games played thus far as well as a lock down defense led by seniors like William Wang and Ryan Dawson.

Even with the issue of having a different goalie every game because there are no goalies at the school, the team has still been able to win and in dominant fashion so far this year. The goalies have come from all over Northern California.

“The final game is around the corner and I’m excited to see the team in action,” sophomore forward Jonathan Wang said.

The hockey team is very positive and confident in a championship being won this year. The championship game will be played May 14, with the semifinals coming the day before.

The team’s passion for the sport is visible and their recent success has only boosted their confidence. Despite this, they say they just want to have a good time in the rink.

“I would say we just try to have fun and to get less experienced players a chance to score,” junior forward Jesse Mount said.

The team is filled with players passionate about the sport since they were young. Joining youth teams they got a feel for the sport and are now aware of how to play off each other in a team setting.

The hockey team doesn’t practice together, which is a common theme throughout most of the league. Instead, they come to the rink as a team on game days. Most of the team members already have experience, meaning they can quickly react to a teammate’s play.

With four more games, the season is looking good for Cal, which have been ramping up their preparations for the final.

“I have been very proud of the team this season,” senior forward Christian Starr said. “I enjoy being on the rink and can’t wait to win this season.”

Fans of the Cal hockey team have not been disappointed this year with these crushing victories. And they hope to continue seeing them all the way through the season when Cal can win their fifth championship.