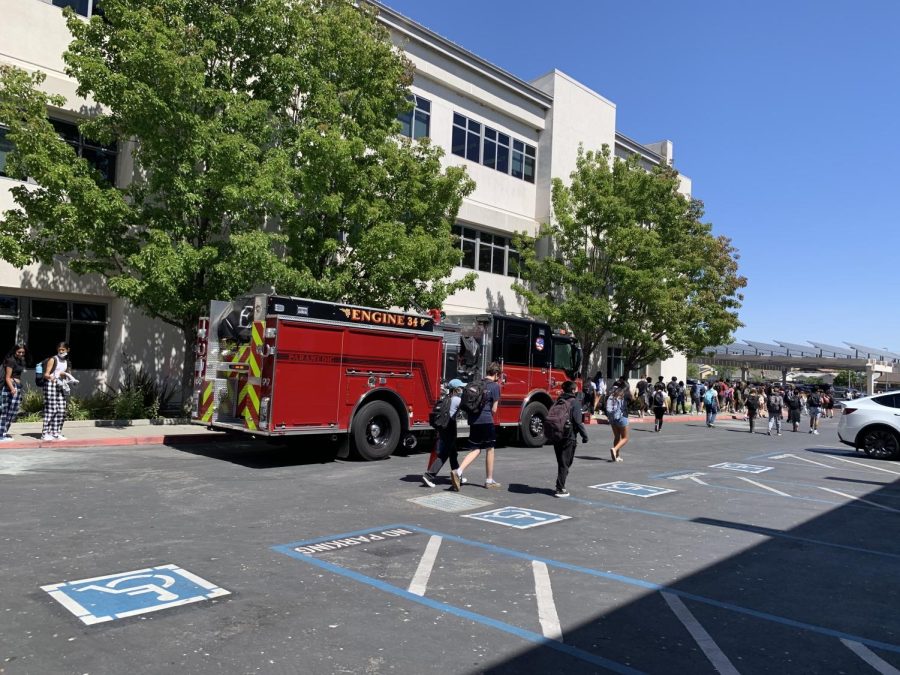 Firefighters and police investigate the scene last Friday after the fire was put out by history teacher Daniel Sweetnam.

As history teacher Sarah Eddings was walking through the first floor hallways in the main building last Friday, she heard two girls whispering about something with urgency.

When she questioned them, they reported there was a fire burning in a metal garbage can in the all-gender bathroom.

“I saw a teacher walking in the hallway and told her that there was a fire in the bathroom,” said the junior girl, who wished to remain anonymous because she didn’t want to be associated with the incident. “We [Eddings and her] went to go call admin immediately after.”

Eddings promptly rushed to the bathroom to see for herself.

“The smoke was already to the door,” Eddings said.

Eddings quickly grabbed a fire extinguisher but realized she didn’t know how to use it, so she looked to the nearest class and asked history teacher Daniel Sweetnam for help.

“Ms. Eddings walked by with a fire extinguisher,” Sweetnam said. “She asked if I could go take care of it while she watched my class. I had used one [fire extinguisher] before.”

Sweetnam tried to extinguish  the fire in the smoke-filled bathroom until an administrator  moved the trash can outside of the main building. Due to the residue from the fire extinguisher, it was difficult to tell if the trash can was still burning when it was outside, Sweetnam said.

“The fire was pretty small inside the trash can, but was very smoky,” Sweetnam said. “I used the fire extinguisher once inside the bathroom and then used it when it was outside.”

The fire started around 2 p.m., triggering the fire alarms to sound.  Assistant principal Jeffrey Osborn announced shortly after that only students in the main building should evacuate to the field.

Students waited for around 40 minutes before they were permitted to return to their classrooms with about 10 minutes left before fifth period ended.

Junior Eren Pinar was in his English class on the third floor when the fire alarm went off. He said they sat there for a couple minutes until the announcement came informing students and teachers to evacuate.

“I wasn’t too worried until I started to smell the smoke,” Pinar said. “Then it hit me that there was actually a fire. It wasn’t a drill or anything.”

Students inside other buildings were asked to remain inside while the fire department and police assessed the situation.

“Most people were laughing about it because it was kind of funny,” said junior Benjamin Lustig, who was part of Sweetnam’s fifth period and saw him leave the classroom to extinguish the fire.

With the help of both students and adult witnesses, administrators were able to track down and identify the students responsible for starting the fire, Osborn said.

“It was an intentionally set fire,” Osborn said. “Nothing spontaneously combusted, and there was no faulty gas line that ignited or something like that.”

Osborn said the typical consequences for arson on a school campus are suspension or potential expulsion.