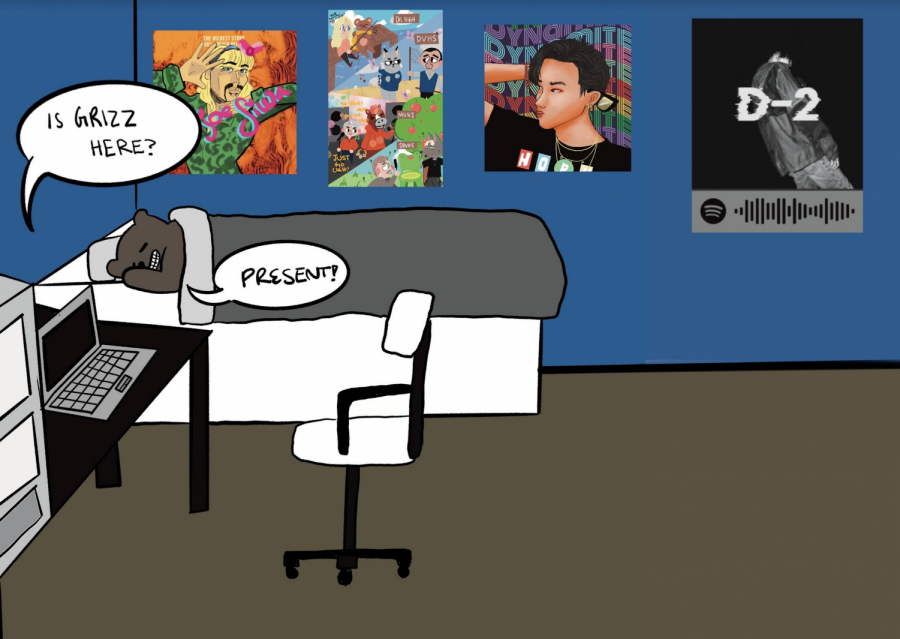 One of the main benefits of remote learning is students can actually sleep in.

PRO: There are benefits to online learning

What students originally saw as an extra week of spring break last March turned into the San Ramon Valley Unified School District starting the school year completely online. This decision has been a big point of controversy among students, parents, and teachers, who have a wide range of opinions about remote learning.

Despite the pitfalls of online learning, there are many upsides. Students can be more self-sufficient and work at their own pace, while not facing 3,000 of their peers every day. Being in their homes, with every work material accessible, allows students to work on what they want when they want. Plus, only talking to friends helps take away some social anxiety they might otherwise feel.

Probably the biggest upside to online learning is, of course, sleep. We’ve been hearing about the benefits of later school days and more sleep for years, but now’s our chance to finally test drive those theories. It may not be the healthiest thing to roll out of bed at 9:15 a.m. for a 9:20 class, but man does it feel good.

Additionally, sleeping more has a variety of mental health benefits, which are crucial in a time of isolation and anxiety. The Child Mind Institute, a nonprofit organization that provides resources on children’s mental health, actually chalks up much of what contributes to that signature “teen angst” we all feel to a lack of sleep.

An article published by the Child Mind Institute cites Dr. Allison Baker who concludes that teens who don’t get enough nightly rest can actually exhibit symptoms similar to those of ADHD, including restlessness and a lack of focus.

During a time when students now have to sit in front of their screens for about six hours every day, the ability to focus and self-regulate (keep our emotions or aggression from taking over) is more important than ever. Getting a good night’s sleep can eliminate triggers to depression and anxiety, and it’s now easier than ever.

That’s not all. In a 2014 study at Stanford Children’s Health in the Bay Area, Dr. Mary Carskadon explained the concept of “social jet lag” – when students shift their sleep schedules during the weekend to sleep in and go to bed later. She said that this jolt in sleep rhythms “…plays into appetite and metabolism and weight gain… mood and emotion, which are already heightened at that [teen] age.”

But now it’s easier for students to maintain a relatively constant sleep schedule, especially when they’re not “making up” sleep from lost time during the week. An hour adjustment here or there isn’t going to throw students off their rhythm, and they’ll have more energy to tackle the challenges that come with remote learning, as well as dedicate their mental health toward other stresses.

Of course, mental health is a very complex and serious subject, and certain issues just don’t have cure-alls. But if students don’t have to deal with sleep deprivation, it’s at least one less issue for them to worry about. A junior who doesn’t get sleepy until 12:30 a.m. no longer has to stress about making six hours of sleep last them three block periods, two tests, and an after-school activity.

Additionally, remote learning can take away some social stresses that even the most extroverted of students face. Having no friends in a class usually meant an uncomfortable 100 minutes for students, who tried to fit into the flow of a class while longing for brunch or lunch, when they could see their friends.

Now, if there aren’t any familiar faces on the computer screen, it’s easy to text friends in other classes from time to time (though texting in class isn’t exactly encouraged). It’s also easy to put on some soft background music for a little familiarity amidst the new schedule and learning format.

True, it may be better for freshmen or sophomores to take the time to meet new people and try to connect with classmates, but for many upperclassmen their friend groups are set. It’s not as much of a priority to be social with new people if they’ll be gone in a year or two.

In no way is online learning a permanent solution to the district’s reopening plans. It can never replace the social and physical benefits of students leaving home and seeing teachers and peers face to face. But that’s the thing to remember – online learning is only temporary. Chances are, by the start of second semester, we’ll have moved back to school on campus, or at least into a hybrid schedule.

If and when we’re all back on campus, it’s pretty much a guarantee that we’ll miss those extra hours of sleep, or the comfort of logging on for the day with a cozy blanket and a hot breakfast. Not only is it safer for students to be online to start this school year, but it’s something that we can potentially enjoy while making the best of these stupid, unprecedented times.